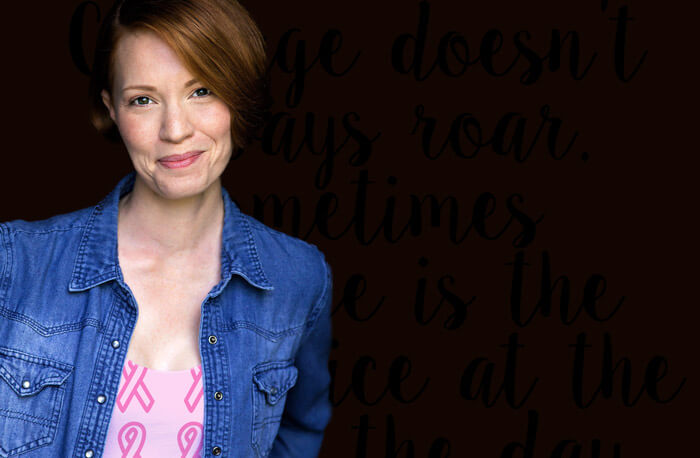 “My mother passed away at age 63 from ovarian cancer in July 2013. After she died, I decided to get a preventative double mastectomy. I had tested for the BRCA1 mutation and had been undergoing mammograms since age 26. Three days before my appointment with the surgeon to pick the date for the mastectomy, on Sept. 29, 2014, I was diagnosed with breast cancer—stage 1, estrogen-positive and progesterone-positive.

“I was only about 80-percent sure about doing the preventative mastectomy. I always would have wondered if I was cutting off a healthy breast. Being given that little bit of cancer at the end, I never have to question if I made the right decision.”

“I had the mastectomy on Oct. 24. Chemo started in December and ended in April 2015; 13 rounds over four months, but no radiation. I also did a complete hysterectomy in May 2015, just to prevent anything else, and then reconstruction in June.”

• “I had this long beautiful red hair. That’s who I was. Cutting that off was really hard, but then empowering once I finished buzzing it. I looked in the mirror and thought, ‘I look damn good bald. I’m hot!’ And then the next day, I’d step outside and be like, ‘Oh s—. I’m bald.’ Every moment had its own layers.”

• “Every new side effect, I’d have a breakdown. And then I’d rally. My hair falling out. My eyebrows. My fingernails would turn black and start to detach. My toenails too; I couldn’t wear tight shoes. I’d mourn each new loss. It’s like I was a camel with a full pack of straw. Every new straw would break the camel’s back, but then I’d get up with my wobbly legs and move on.”

• “When I was in the middle of chemo, I was on the couch one day. Bloated. No energy. No boobs. I just looked like hell. My husband walks by and he goes, ‘Damn. I can’t wait to tap that. … When you’re ready.’”

• “My husband and I are childhood sweethearts, we’re like each other’s limbs. I know he was going through it too, but he was always strong. Always there.”

• “I’d have these moments during and after chemo where I’d feel like a monk because I was having such introspection. I was like Yoda. I kept trying to force advice on people. ‘I know so much now; I’m so close to death. Let me give you all this unsolicited advice.’ I was bald. I should know things, right? Now, looking back, I realize I was probably just horrendously annoying.”

• “I have 13 years of improv comedy training. Using that art helped so much. I remember, after my mastectomy, waiting in the doctor’s office for like three hours. I was filled with rage because of the wait; I was about to burst through the door. Improv training teaches you to think sideways instead of thinking linear. So, I heard this music playing in the background. And I started to dance. All over the room. On top of a table. It allowed me to reel back the emotion and express it in a different way.”

• “Our society puts value on looking sexy versus being sexual. I know, along the way, I looked sexy. At one point with my buzz cut, I got motorcycle boots so I could feel like a badass. In a way, I was trying on different identities. For a while, being androgynous felt sexy; I was getting haircuts that I thought looked hot on men. My husband did not find that sexy at all.”

• “But I haven’t felt sexual since going through this. That’s partially due to me being in menopause at 31—and being on medication that lowers my hormones. I’ve been technically castrated. On a physical level, I’m not what I was before. So, that’s still a process.”

• “I had no idea there would be this emotional cliff after the physical healing. Why didn’t anyone tell us this? There was a huge amount of depression after my reconstruction. It’s the finish line, so I should be happy. Instead, I felt this huge wave of grief and fear because I wasn’t instantly back. It took another two years to feel like I wasn’t fatigued. It took about three years to really start dealing with the emotional baggage underneath.”

• “For me, getting extra help was important. I realized, at a certain point, that I needed therapy. [Practicing] deep meditation and understanding acceptance, instead of fighting against it, also helped. Cancer happened. What’s next? If you’re looking backward the whole time—and going why me—it’s too much extra pain.”

• “I had to constantly remind myself to be compassionate toward Aniela. And patient. Because there isn’t one fix of ‘try on this sexy dress’ or ‘go get your hair done.’ It’s emotional work. Time helps.”

• “One of the interesting lessons involved losing all of this external beauty. I modeled, I acted. My looks were everything. I watched each of these things that were valued by my industry, by society, just fall away. No breasts. No hair. No eyebrows. My skin broke out from the chemo. … It led to this moment of questioning: If I put value in this thing, and it’s gone, am I still valuable? And the answer is yes. Once that clump of hair is on the ground, no one wants it. But without the hair, without the breasts, I’m still valuable.”