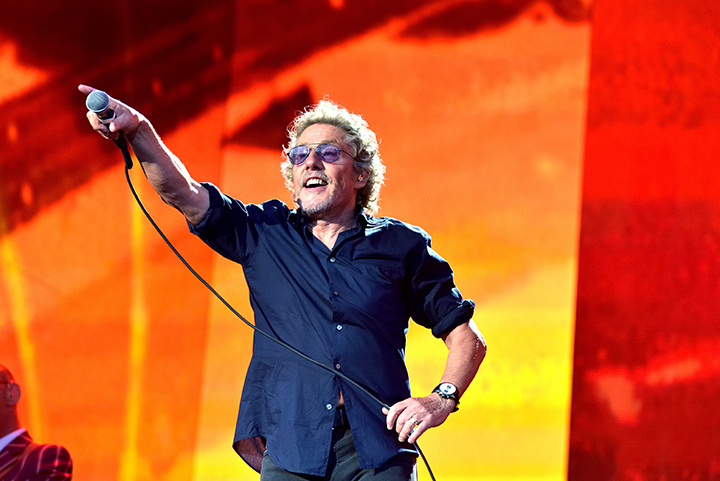 Editor’s note: Roger Daltrey takes the stage Wednesday, Nov. 1 at Hard Rock Live, inside Seminole Hard Rock Hotel & Casino, for a concert with current members of The Who—sans guitarist Pete Townshend. Daltrey will perform hits and deep cuts from The Who’s epic catalog, as well as selections from his solo career and songs off an upcoming album. The 73-year-old front man spoke candidly about a variety of topics during a recent interview with Lifestyle. Visit myhrl.com for ticket info.

Are you excited about this solo tour?

I haven’t done solo shows for about four years because I’ve been out with The Who. So I’m excited but apprehensive. It’s weird. But it’ll be fine. I’m looking forward to being with the band. If you ever stop being anxious about [performing] and caring about what you do, then it’s time to give up.

You’ve said that your voice, at this age, is like a car engine and that you have to keep it running. Was that part of your decision to hit the road so soon after The Who’s 50th anniversary tour?

That’s exactly why I’m doing this. If The Who are going to take a break for six months or so, then I need to keep the voice going. At least every six weeks, I need to do some serious singing just to keep the muscles in shape. At my age, it’ll go very quickly if I stop for any length of time. So I’m calling this one, “It’s a quick run while Pete’s away.”

Has performing these past eight years been even more rewarding for you given the serious vocal chord surgery you underwent in 2010?

Oh yes. My doctor (surgeon Steven Zeitels) took such good care of me that my voice is better now than it’s been since I was 30. Plus, with modern technology now, I can actually hear myself on stage, which makes a very big difference to a singer. For years and years, I did nine out of 10 shows not hearing any of the vocals at all. You end up over-singing, and that’s brutal on the throat.

There seemed to be such a high energy to the 50th anniversary show I saw. Did reaching that milestone mean something special to you and Pete?

I think it means we’ve finally grown up. (Daltrey laughs) Perhaps it did mean something, yes. We finally have a band that can play all the music that we did. For years, The Who went on stage without the backing vocals that were an enormous part of our sound. So much of what we actually put on the records was missing in concert. It didn’t make the shows bad, it just wasn’t what we’re really good at. When you hear five-part harmonies within the songs that Pete wrote … it’s just extraordinary. It’s a magical sound. And it does give it a new energy.

The human voice is the best instrument of all, you know. The trouble is that the guy standing up using it, he’s the instrument as well. That’s the difficult bit of it—you can’t change the strings.

Are there songs that, through the years, you fall in and out of love with?

The only one I’ve ever gotten bored of is “Won’t Get Fooled Again.” And I think that’s because, from the time we wrote it until today, I can see that we continually get fooled again (Daltrey laughs). I think the answer is, turn off the news. Let’s all live in ignorant bliss.

What songs are you looking forward to singing on this tour?

I’m going to sing some Who songs that The Who has never played before on stage, which will remain surprises. I have a song with just a piano that’s off an album I have coming out next year. So I’ll do a few things like that, and we’ll see how they go down. … I’m not out to prove anything; I want to have a good time on stage. And if I’m having a good time, the audience will have a good time.

I’m not trying to be The Who. I can do that show anytime I want, but I can’t do it without Pete. No one plays guitar like Pete. He’s the most original guitarist there is. For me, he’s the ultimate. So I’m going to sing songs that I want to sing, and if people don’t like them, tough shit.

Do you worry that rock is losing its footing amid the pop and hip-hop sounds that dominate the music scene?

Rock radio is dead, that’s for sure. But that doesn’t make rock itself dead. There’s a simplicity in that music that grabs a certain age group and stays with them forever. I think that is timeless and will go on. Will it have a heyday like it had in the past? Maybe not. Then again, there’s room for everybody.

We aren’t a rock-n-roll band. We’re a rock band. So if rock is dead, we’re dead. But our music seems to be more popular than ever. Our audiences go anywhere from kids who are 8, 9 and 10, up to their grandparents of 80. That music hasn’t aged to them, so I don’t buy that rock is dead. It’s just different.

If I was a youngster today, I would do my best to see every artist of the original period. The Stones. Dylan. Roger Waters. Paul McCartney. It doesn’t matter if they’re not quite as good as they were in their heyday. Young people should be reminded of the roots of where this music came from and why it’s so important to [so many people.]

I would recommend seeing The Who every time the band goes out, until Pete can’t do it anymore, just to see Townshend. What comes out of that guitar, it’s only Townshend that does that. Even Jimi Hendrix copied Townshend.

People also come to a Who concert to hear your iconic voice.

I’ve never liked my voice. I don’t know many singers who actually do like the sound of their own voice. When I listen to what I record, it’s hard for me. But I do know when I get the song right, because it’s the emotion in the song that touches me. So I can get past not liking my voice. I emote. That’s what I do. I touch people with the words.

What can we expect on your upcoming solo album?

There’s so many areas of my voice that people haven’t heard. I used to sing Johnny Cash in the early days. I do one song in my lower register with just me and my piano. There’s also one that I’m singing like a choir boy; it’s a very spiritual song with just a piano and a squeeze box. And then I’m doing some soul stuff because I started as a soul singer; one is a Dusty Springfield song that was written for a woman but I’ve changed to a male song.

The album as we knew it in our generation used to be about taking people on a musical journey. In today’s industry, in the digital age, that doesn’t exist. People choose [individual] songs. Say you have a hit record with “Roll Out the Barrel,” just to throw out a title. Nobody is interested in the next song on that album.

In the old days, we took ages figuring out which song should follow the previous song. You got stoned and everyone went on a trip listening to the music; the keys and lyrics that followed each other were really important. Now, it doesn’t matter.

In that sense, it’s doubtful we’ll ever hear an album like “Quadrophenia” ever again.

Someone might make one, but it’s whether it would ever be listened to [the way it’s intended], unless it’s produced on vinyl—which, thank goodness, is coming back. In a big way, at least in Great Britain. Here, vinyl is outselling digital 10 to 1. Which is fabulous, because the sound is 100 times better.

They sold us a turkey when they gave us CDs. They really did.

You’re writing your memoir, which is due out in 2018. What has it been like to reflect on your life and do a deep dive into your personal journey and history with the band?

It’s been really interesting. I’m so pleased with the book. I’m sick of every rock biography I read being all about the parties, the drugs, the women. It’s dull. There’s no insight into the person. How many parties, how many drugs can you do and keep it interesting for 300 pages?

So I’m writing about what it was like to be in the middle of that band—and be the one person who wasn’t an addict. I was in The Who with three other addicts; if there was anything there, they’d take it. Maybe if I’d been an addict, The Who wouldn’t have lasted five years, I don’t know. So I’ve written about that aspect of what it was like, what was going on at the time, my feelings about the band. And my feelings toward Pete—who, at times, could be very, very difficult in those early days, especially when he was drunk and when he was on heroin.

What I’m pleased about is that [writing] the book has reinforced the knowledge that I’ve always had—and that’s that I love Pete very deeply.