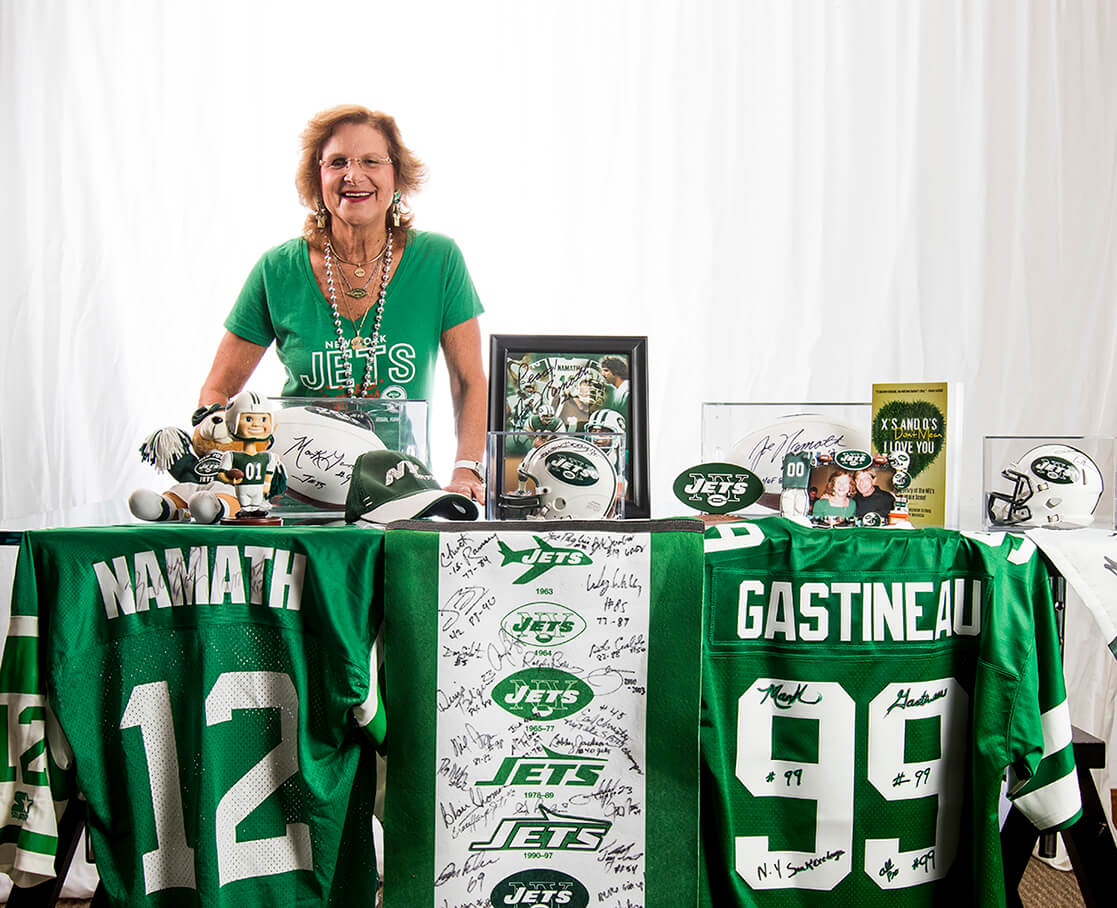 The greatest quarterback in New York Jets history had one question for his son-in-law, artist Edwin Baker III, before making the drive from his home in Tequesta to an event in progress at Coral Springs Museum of Art earlier this summer. He was happy to attend a permanent collection exhibit that featured work by his daughter Olivia’s husband, but Joe Namath also wanted to know if Connie Nicholas Carberg was in the room.

More important, was she wearing green and white?

Namath, no doubt, knew the answer to the latter question. He asked Baker to tell the Coconut Creek resident to remain at the celebration until he arrived. As always, all eyes turned to Broadway Joe the minute he entered the room. And, as always, he spoke to every person who wanted a few seconds of his time, signed every autograph and posed for every photo. When he found Connie, the two embraced and spent time catching up. Namath then asked her how long they had been friends.

“I couldn’t think on my feet that fast. Not with Joe Namath standing next to me.”

Connie recounts the episode while sitting on the couch inside the Coconut Creek condominium she shares with her husband of 38 years, John. Naturally, she’s dressed head to toe in her beloved green and white—including earrings and necklaces with the Jets’ logo. What she modestly leaves out of the story is that Joe Namath wasn’t the only history making member of the New York Jets family at the museum that night.

As chronicled in her recent book, X’s and O’s Don’t Mean I Love You, Connie worked for the Jets as an NFL scout—evaluating college football players for pro potential—at an age (24) and in an era (the mid-1970s) that only adds to the magnitude of the achievement. Though some obituaries for Linda Bogdan, who died in 2009, identified the daughter of Buffalo Bills owner Ralph Wilson as the first female NFL scout, Connie broke that ceiling nearly a decade before Bogdan when the Jets quietly added scouting to her duties as that department’s secretary after the 1975 season.

By today’s NFL standards, with more women than ever earning front-office positions with teams, Connie’s work dissecting game film and putting together files on potential draft choices might draw little fanfare. But back in 1976—when she traveled to her alma mater, Ohio State, to chat with then-coach Woody Hayes about his top players—the idea of a woman scouting college talent for a professional football organization was virtually unthinkable.

That is, to everyone but Connie.

It was the kind of childhood about which diehard New York Jets fans, and many football-loving men of a certain age, could only dream. The Nicholas family—Connie, her older brother and younger brother, and her parents, Calvin and Lynne—grew up on Long Island, in Babylon, New York. “Dr. Cal,” as he was known, not only ran a general practice out of his home, he also worked as the Jets’ internist, initially as an unpaid volunteer in the early 1960s before the team formalized the position after a few years. Cal’s brother, renowned orthopedic surgeon James Nicholas, also served on the Jets’ medical team and famously prolonged Namath’s career with four surgeries on his perpetually damaged knees.

For Connie, an admitted tomboy who grew up idolizing baseball great Willie Mays, it was a bittersweet dream come true. On the one hand, by the mid-’60s, Jets players, including Namath, were regularly visiting Dr. Cal’s house for treatment. Connie quickly became obsessed with football. She played whiffle ball in the backyard with wide receiver George Sauer, talked about that week’s opponents with defensive end Gerry Philbin, crushed on wideout Bake Turner when he played guitar at parties—and even escorted members of the Super Bowl III-winning Jets onto the gymnasium floor at Babylon High for a 1969 charity basketball game against the school’s faculty and alumni.

On the other hand, Connie was struggling with teenage insecurities heading into her college years.

“I didn’t feel like an outcast; I got along with everybody,” she says. “But I was never the girlfriend. I didn’t go to prom. I was down on myself in the sense that I was never going to find a husband. Where I was comfortable was in the football world.

“That’s where I felt secure.”

After transferring to Ohio State from all-girls Wheaton College in 1971, Connie brazenly introduced herself to Hayes, the Buckeyes’ legendary football coach, outside the team dining hall. She told him about her family and growing up around the Jets.

Hayes, whose fiery demeanor ultimately cost him his job, couldn’t have been more gracious. He not only encouraged Connie to follow her passion, he extended a remarkable offer: Hayes gave her a standing invitation to watch the team’s closed practices. The coach continued to be a mentor and occasional sounding board for Connie. It was just the experience and affirmation she needed to pursue a career in sports as graduation drew near.

Three years later, in the summer of 1974, the Jets’ new coach, Charley Winner, offered Connie a position as secretary of the team’s scouting department for $7,500 a year. It was the perfect job, except for one minor detail.

“I had no secretarial skills,” she says, laughing at the memory. “I didn’t know how to type or do carbon copies. You couldn’t Google, ‘What’s a form letter?’ in those days. … When [Winner] hired his own secretary, I’d ask her things and she’d help me with typing. But I’d also stay late and just peck away at the typewriter when people weren’t around.”

Connie (on phone) with secretary Elsie Cohen in 1975

It didn’t take long for members of the Jets organization to realize that Connie wasn’t your average secretary—for reasons that had nothing to do with typing. She knew football. And she had an insatiable desire to learn more. She’d spend late nights eating Chinese with general manager Al Ward, picking his brain while copies of that week’s game plan were being made. Ward and other staffers noted that Connie immersed herself in scouting, studying players on her own time, and committing statistics and details to memory.

After conferring with others in the front office, Ward surprised Connie by making her the offer of her lifetime during a front-office dinner; she served as a part-time scout for the better part of three seasons. The only thing more powerful than her love of football—her love for John, who she married in 1979 even though he was a New York Giants fan (“I made him switch,” she says)—ultimately ended her tenure with the Jets. The couple moved to South Florida after John went to work for Southeast Toyota, started a family (son Chris, now 34) and eventually settled in Coconut Creek. In 2001, Connie took a job at Al Hendrickson Toyota, for which she continues to do public relations.

As a parting gift to the Jets, Connie introduced the staff to defensive end Mark Gastineau, who the team drafted in 1979 out of East Central Oklahoma State. Gastineau finished his career with 107.5 sacks, a team record that still stands. When the Jets inducted him into their Ring of Honor in 2012, Gastineau invited Connie as his guest.

“I was so in love, and love is totally illogical,” Connie says of the decision to leave the Jets. “Whatever was going to work for John, that’s what I wanted to do. I’ve had such a great life in Florida.

“But I’ll forever miss working for the Jets. I loved every minute of it.”

When asked about her favorite recollections of being around Joe Namath during his playing days, Connie can’t stop at one. In college, she asked him to be her sorority’s “little brother” and Namath dutifully snapped a photo for her wearing the sorority’s T-shirt. One spring break, she went with her friend to Fort Lauderdale, where Namath had a place, and visited unannounced.

“He invited us in, and we sat and talked—he couldn’t have been nicer,” Connie says. “My friend couldn’t believe it.”

In those days, she adds, Namath was like the Beatles.

“Guys wanted to be like him; women wanted to be with him,” says Connie, who baked the quarterback apple pies when she was working for the Jets. “Even now, when he walks into a room, everything changes.”