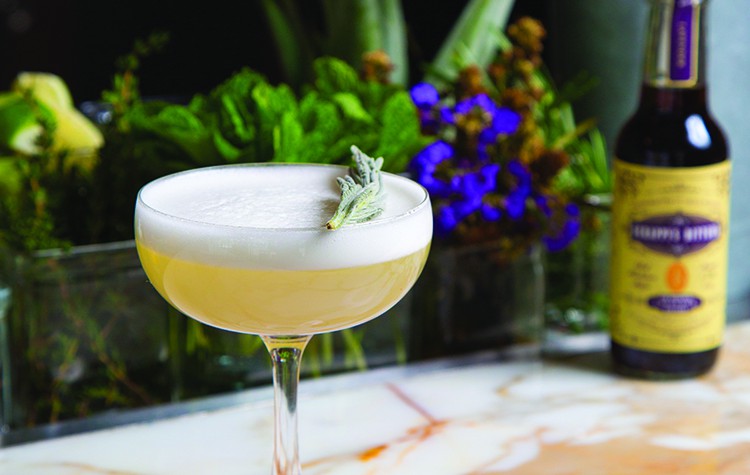 A tequila sour becomes a favorite at Beaker & Gray

In the ever-changing local restaurant scene, Ben Potts is determined to stay ahead of the curve. The bar manager at Beaker & Gray (2637 N. Miami Ave.) uses skills picked up from a past career in investment banking to maximize his productivity behind the bar and keeps customers coming by cutting the worst-performing 25 percent of the cocktail menu each month or so. That means he “always has the greatest hits playing,” he says.

One of the greatest hits is the Lavagave, which has consistently survived the chopping block since Potts and business partner and chef Brian Nasajon opened Beaker & Gray in late 2015. The sour includes both mezcal and tequila (itself a kind of mezcal). The two base spirits complement each other and lend smokiness that Potts says works well with the bright acidity and floral notes of grapefruit juice and lavender agave. The ingredient also signals a shift in cocktail trends.

“Instead of using mezcal, I could’ve used Laphroaig [a Scotch whisky],” Potts says. “Maybe 15 years ago when cocktails were being made with smoky ingredients, a lot of people probably turned to Laphroaig or another scotch, but, nowadays, we have lots of mezcal in the market.”

Another defining ingredient is vanilla bitters, which is measured carefully.

“The vanilla quality helps tie together any sweet ingredient with the sour and with the base spirit in a way that changes the entire cocktail,” Potts says. “If I put two or three dashes in a cocktail or I don’t, it’s a completely different drink.”

Potts credits the idea for the mixture to his former boss at The Broken Shaker in Miami Beach, who suggested that the unlikely combination of mezcal, lavender and grapefruit would be a hit. He’s modified the original recipe to appeal to customers who may be afraid of the main ingredient, which Potts says people either love or hate.

“People who are afraid of mezcal and try this cocktail are almost never turned off by it—unless they come in with a really strong distaste for it,” he says. “Most of the time, people say it’s really very good.”

Add ingredients to a shaker tin and shake for five to 10 seconds without ice. Shake ingredients again with ice. Strain into a chilled coupe glass. Garnish with crushed dry lavender buds and express the essence of a grapefruit peel over the top.