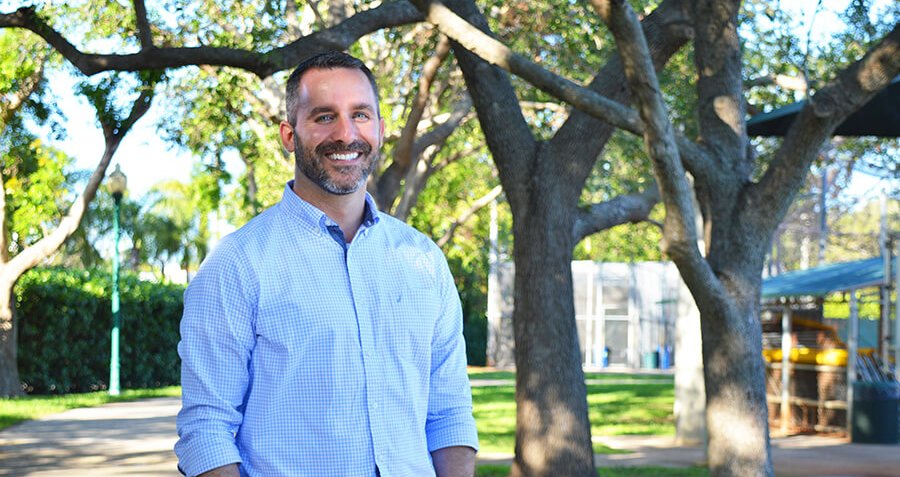 Though Robert C. Mattes majored in outdoor recreation and psychology at Plymouth State University, it took becoming the recreation director for the city of Hopkinton, New Hampshire, to see that working in parks and recreation could be, to use his word, “wonderful.”

“It really wasn’t until I started that career that I realized this isn’t a thing [where] I’m going to be here for a year and leave. This is my path,” Mattes says. “And it was really exciting to find that out.”

Mattes went on to earn a master’s degree in parks, recreation and tourism management at North Carolina State University while working as the recreation director in Union Vale, New York. He also served on the executive board of the Hudson Valley Leisure Services Association and later became the director in Portland, Maine.

But the New England native pictured himself in Florida in the future, and he welcomed the opportunity to work for Pinecrest when it knocked on his door. “My husband, Richard, and I both wanted to find a new place where we could settle down and put down our roots for the long haul,” Mattes says. “I did come down to visit prior to interviewing, just to check out the community, and just fell in love with it.”

Since November, Mattes has been the director of the village’s parks and recreation department, replacing Loren Matthews, who retired after 19 years as its first recreation director.

“It’s really exciting to come into a department where people are passionate about what they do,” he says. “They care about it and they want to see Pinecrest prosper. My first year really is to get to know as many people as possible.”

The South Miami resident spoke to Pinecrest Lifestyle about his new role.

1 How is Pinecrest different from the other cities where you’ve worked?

Pinecrest wants the best of the best. I’m excited about that because the community deserves it. … There’s a lot more community involvement in Pinecrest and people who are really willing to speak to let you know what’s going on and help you out. That’s exciting for me because I love the involvement. I love it when the whole community comes together to see things happening. That happened in the other communities [where he worked], but I think Pinecrest seems even more involved and more vocal, which is really exciting.

2 What are some of your day-to-day duties?

My day’s full of meetings [with village management and community members] some weeks and other times, it’s recreation programming and talking to community members. There are times I go to the parks to watch and see what’s being used, what’s not being used. [Seeing] how people are interacting with each other and trying to figure out ways to make it more social and [see if] we’re able to incorporate something for everybody so everyone feels [the parks are] something that they can be proud of. My day’s full of listening to people who have concerns as well as listening to people who have ideas for new programs. It’s a very mixed day but it changes so often that you can’t get bored of it.

3 What do you think is important about using parks and recreation facilities?

Every couple days, we need to take time to play. We need to take time to get out of our own heads, throw a ball around, run on a track or field, play laser tag or just swing on a swing every now and again to refresh ourselves. As adults, I think we forget to do that because we think play is just for kids. And it’s so much more than that. It really helps to not just be physically more healthy, but mentally. It gives us a time to rejuvenate and not think about the stress and just take a moment to breathe and know that everything can be OK.

4 What are some recreational activities you’ve explored since moving to Miami?

The beaches. I got all my snorkeling gear, wetsuits and all that stuff purchased already. I’ve been out in the water doing some snorkeling and getting ready to start taking scuba classes. I want to start learning how to dive. I’m excited about that. A lot of it is just wandering and visiting parks. There are some beautiful parks in the area. I’ve been enjoying sometimes a little too much of the food, but it’s been wonderful. [laughs].

5 Any big goals for the department this year?

We’re looking to get the department certified as an accredited parks and recreation agency [by the Commission for Accreditation of Park and Recreation Agencies]. It’s about a three-year process, but we’ve got the people who are excited about it and want the same things. Anyone who looks at our agency will know that there’s a minimum quality level you’re going to get and it exceeds the standards of what a really great parks and rec agency is. I think it’s important for Pinecrest to know that we care enough to do that.