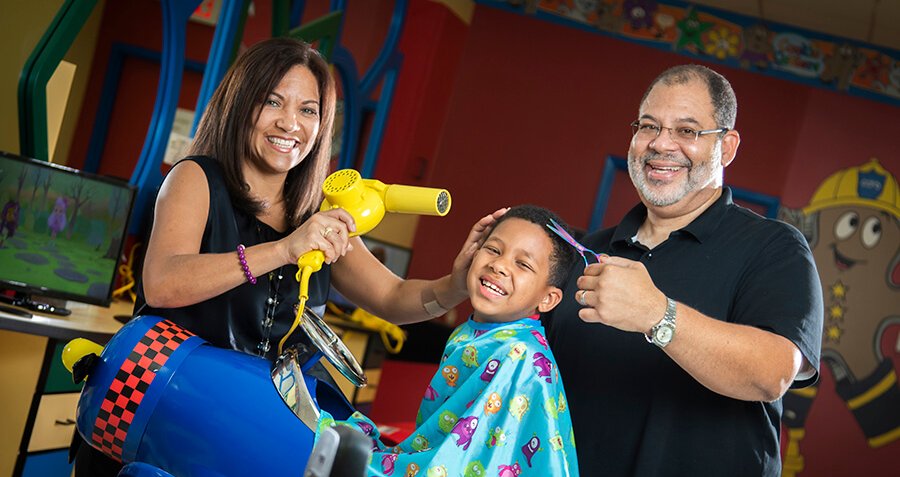 Julian and Rachele Alexander, owners of Cookie Cutters Haircuts for Kids in Coconut Creek, remember the day they took their son, William, for his first trim. They took him to a salon that catered specifically to children, which left a lasting impression. “It was a great experience for him,” Julian Alexander recalls. He remembers being struck by the kid-friendly atmosphere, complete with balloons, which helped turn what could have been a traumatic event for their son into something joyful.

Though Julian Alexander spent more than two decades building his career in the finance departments of major hospitality and retail companies, he always was interested in owning a business. He’d dabbled with different ideas on the side while working full time but was never able to get any of those ventures fully off the ground. When he was laid off in January 2017, he saw it as the perfect time to pursue his entrepreneurial spirit wholeheartedly, and he began exploring different franchise opportunities.

Weighing the options, William’s first haircut naturally floated to the top of his mind. “I wanted to do something that made kids happy,” he says. He spent several months looking at different kids’ salon franchises, narrowing it down to three different companies. The Cookie Cutters company caught his attention and ultimately became his first choice because the business model is simple, and the focus is on providing a nice environment for children and parents. He signed the purchase paperwork in May 2017, and opened the salon Jan. 24.

After scouting locations, the Boca Raton residents decided upon Coconut Creek for the first of three stores they plan to open in South Florida.

“This area is very family-friendly, with lots of families, lot of kids,” Alexander says. The plaza where they opened also has a kid’s dance studio and a daycare facility, so they figured Cookie Cutters would be a great addition.

“We have so many parents that come in and tell us, ‘It’s the first time he’s ever sat still,’ or ‘… the first time he hasn’t screamed or yelled,’” Alexander says. “It’s creating that total kid-friendly environment that they love.”

Each haircut station has a television for entertainment, but the stylists are able to move around, depending upon what kids want to do. There’s also a slide for kids to play on—or on which they can have their hair cut. The strategy is to make a haircut an enjoyable experience.

“The happy smiles of kids are so much more gratifying than the parents’ smiles,” Alexander says with a laugh.

It’s become a family endeavor, with their son taking an active role in the business as well. William, age 7, picked out the seats for the store, lends a hand in sweeping up, helps the kids choose movies and proudly hands out flyers to potential customers.

Both Julian and Rachele say they have taken a heart-centered approach to this new venture, with the children at the center. “They’re always so happy when they leave here, and that warms your heart that you can do that for them,” Alexander says.