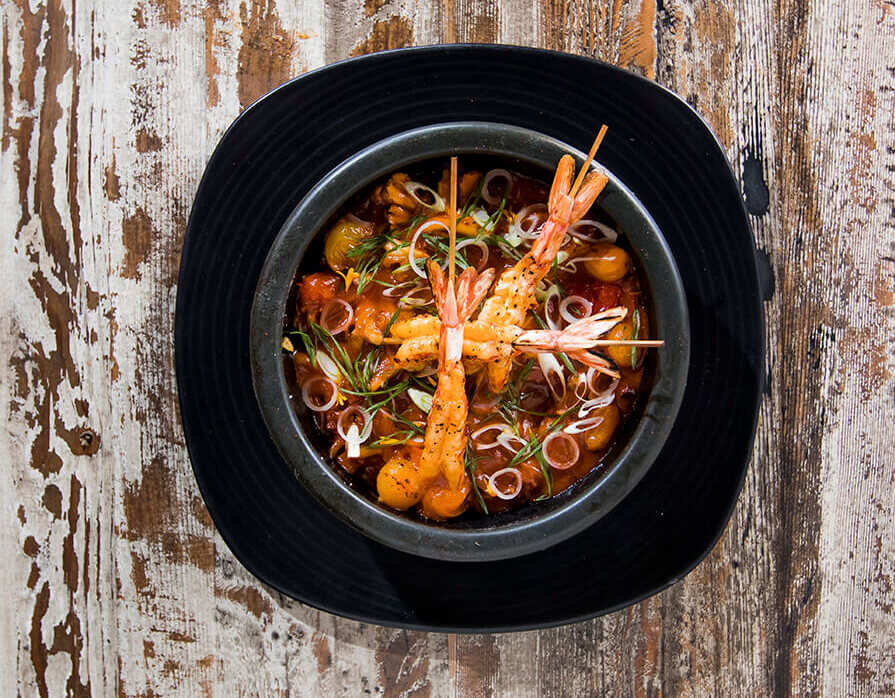 Artists in the Kitchen

“There really isn’t anything like it in Fort Lauderdale,” Rocchio says. Being well-versed in the culinary scene through his upscale restaurant Valentino Cucina Italiana, Rocchio uses his latest project as an experimentation ground, with exceptional results.

The sister restaurants share space, the entrance to One Door East literally being one door to the east of Valentino. Its global tapas concept always was meant to be more approachable, the menu an ever-evolving sample of different tastes. “It’s gone a little bit more Asian, which is something that I discovered—that I really like those flavors, whether Japanese, Chinese, Korean or Thai,” Rocchio explains. “It’s a lot of beautiful new ideas for me.”

There are plenty of collaborative ideas as well, thanks to contributions from two more chefs: Albert Diaz and Raymond Li Jr. Rocchio adds Valentino’s Mediterranean inspiration to the mix, creating an atmosphere that evokes multiple artists adding touches to one canvas.

“There’s really no boundaries,” Rocchio says. “If you have the right talented people in there, then you can allow that creativity to go.”

Though the menu changes regularly, with up to four new specials each week, there are constants, such as crackling shrimp with Thai chili sauce, and wild mushroom gyoza with ponzu and spicy sesame oil. That still leaves plenty of room for play. The paella hotpot, for instance, incorporates flavors that speak to Li’s international influences—but, as the sous chef shares, there’s more to this inspired dish.

The surprise of saffron: “The saffron dashi adds the traditional flavor of the paella, which has the saffron in it. Then it has an unconventional twist because it uses a Japanese stock, which is a dashi.”

Ocean to table: “The royal red prawns come from the Gulf of Mexico; [his source] goes out every weekend to bring us the freshest possible seafood. It comes out of the ocean, and the fisherman brings it right to my hands. I cook it and put it straight onto the guest’s plate.”

The rice: “For regular paella [the Spanish version] you use short-grained rice as well,” Li says. “This is a Japanese version of the rice. It’s called Matsuri Golden Koshihikari, a very premium rice that they use for sushi.”

An extra pop: “The dish has pickled ramps, from last spring, that we’ve preserved for a little more than six months.”

The hotpot: “I cook my rice in the hotpot, which is traditionally Chinese,” Li says. “You have a broth in a pot, and then you have raw meat, raw vegetables, whatever you like, and you cook it there on the table, all in one pot. The Japanese have another way, where they cook it on a stove, and this is a take on that.”