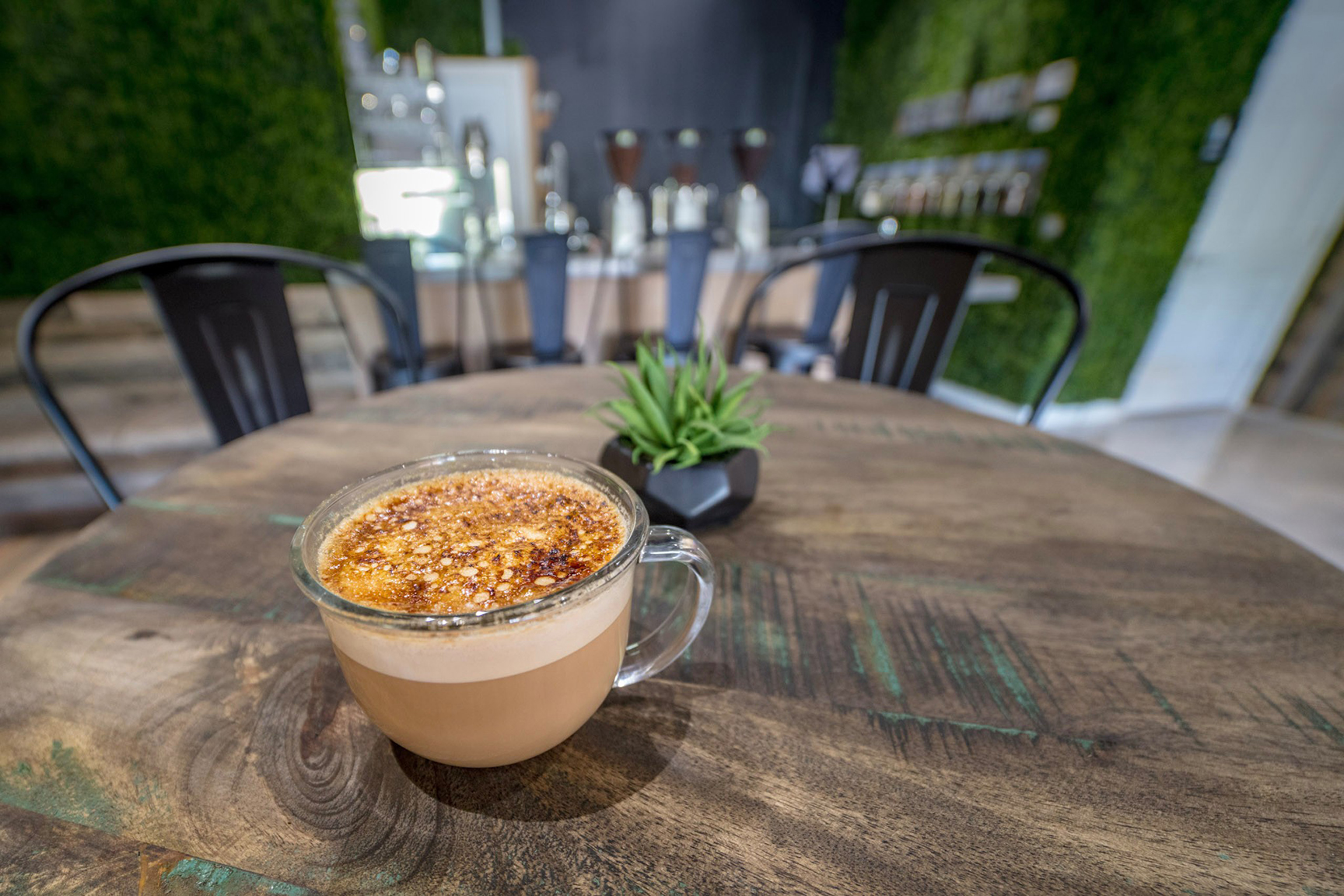 Back to the Grind

Inside a bustling Pinecrest shopping center at the corner of Chapman Field Drive and Southwest 82nd Avenue, brothers Cassidy and Jordan Athos—owners of Brewing Buddha coffee shop—experiment with flavors like pistachio, lavender and smoky s’mores. From the outside, one would never guess that the inconspicuous storefront brews some of Miami’s most interesting coffee.

At Brewing Buddha, the brothers churn out sweet plantain lattes, coconut cupcake cappuccinos and even black coconut coffee infused with activated charcoal. Without cooking or restaurant experience, they taught themselves how to develop flavors and run a full-service coffee shop.

“We can’t give away our secrets,” Cassidy says. “You’ll never hear me tell someone how we do it. All I can say is it takes several rounds of experimenting and sampling until we’re ready to put one on the menu.”

The brothers, who were raised in Pinecrest, have enjoyed coffee for as long as they can remember. “It was kind of like loving cars,” Cassidy explains. “There’s a difference between admiring them and having someone tell you to build one.”

Before the brothers plunged into Brewing Buddha, Cassidy, a self-taught photographer, spent years selling prints and furnishing hotels with his artwork. Though Cassidy sold hundreds of photographs, Jordan, who owns Miami Mint, a gold and coin shop in the same shopping center as Brewing Buddha, suggested Cassidy open his own place to showcase his work.

“We put our heads together and realized the coffee scene is pretty minimal in Miami compared to other cities,” says Cassidy, who served as spokesperson during the interview with Lifestyle (Jordan was unavailable). “I needed a place that was more than just an art gallery. We thought it would be perfect to combine the two.”

For months, Cassidy and Jordan learned the science behind coffee-making. During the shop’s 1½-year buildout, the brothers set up a makeshift kitchen inside Cassidy’s home, spending three to four hours a day on recipe development.

Some of Cassidy’s latest trials include two different lattes—one inspired by sweet and sugary monkey bread, and another infused with cucumber. “We’re constantly trying to push our limits,” he says. “We test 20 to 30 flavor profiles and ingredients a week.”

They aren’t always successful, Cassidy says. “We tried to make a curry latte once,” he laughs. “It was disgusting. You just got to try it all and see what works. It’s a running joke between my brother and I to see who can outcreate the other.”

By mid-2017, Brewing Buddha was open for business. “We’ve received nothing but love and support,” Cassidy says. “We serve hundreds of cups of coffee a day. We’re here for the community.”

Inside the shop, which features wood paneling, grass walls and rustic furnishings, you’ll find a number of Cassidy’s prints hanging on the walls. The menu, designed by the brothers, focuses mostly on coffee with a few small bites. Every coffee-based drink uses beans from Relentless Roasters, a Miami-based roaster.

“I personally love the honey turmeric,” he says. “It’s nice and earthy. It’s an everyday type of drink.”

Though the food menu is small, items are hearty. The banana strawberry and Nutella toast comes garnished with honey and cinnamon, while the Greek pasta salad is tossed with cucumbers, black olives, peppers and feta cheese.

“We’re still finding a groove in our business,” Cassidy says. “We’re bringing back our music nights, and we definitely hope to open more locations in the future.”

“Right now, though, it’s grind time,” he adds. “My brother and I are here putting in 80 or 90 hours, six days a week. We’re trying to live up to our reviews and continue serving the best cup of coffee in Miami.”