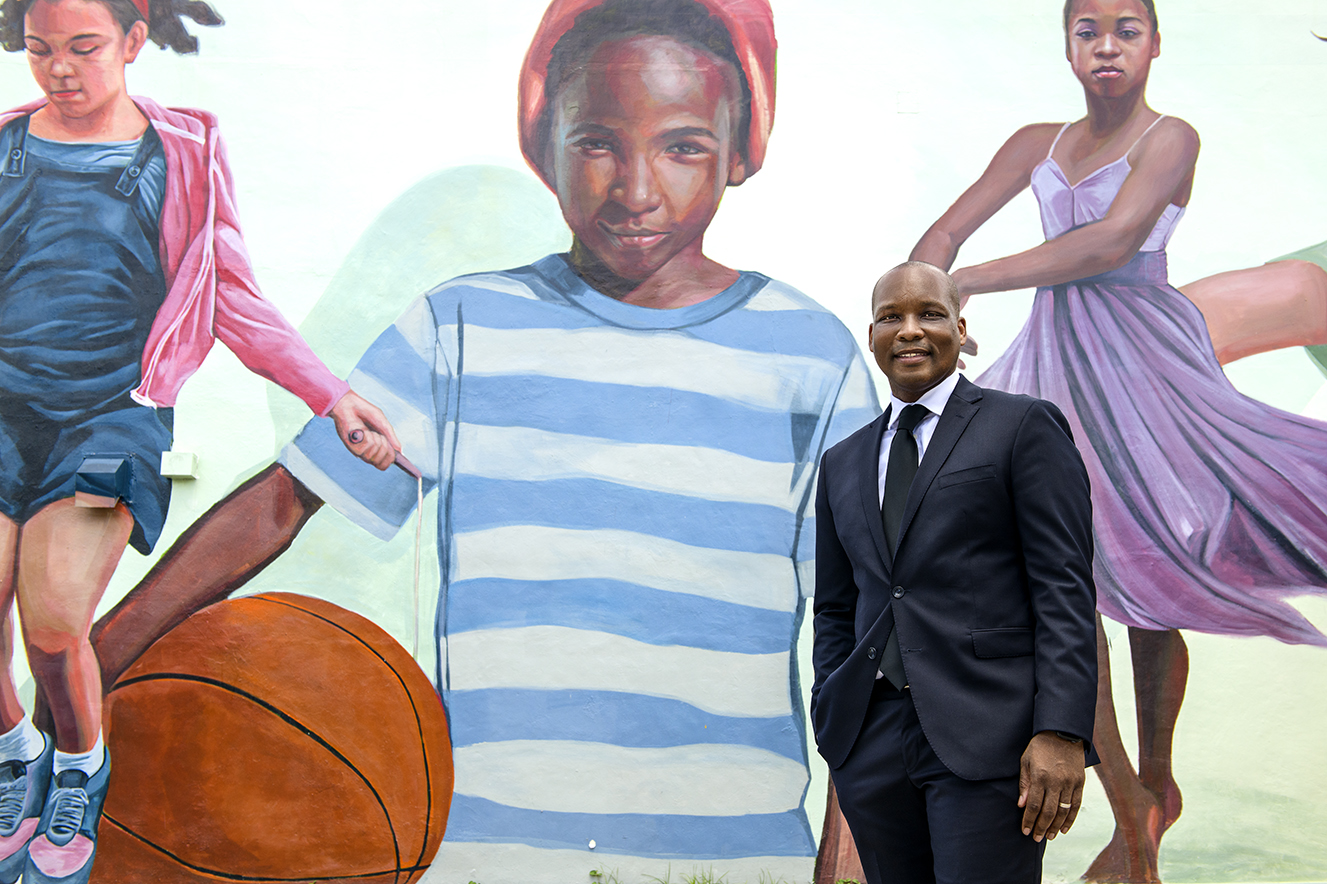 Education after high school has long been described as a lever to jobs and success. But what if there’s no college in your neighborhood? What if you can’t afford it? What if you’ve been told you’re not college material or believe it’s beyond you? What if you’re simply too busy juggling low-paying gigs to go?

Gregory Adam Haile thinks about those questions daily as president of Broward College and as the first in his African-American family to graduate from a university. He’s now spearheading a movement—Broward UP—to bring post-secondary education directly into Broward’s most underserved areas in a novel partnership that is drawing support from nonprofits, cities, business and even Tallahassee.

For Haile, Broward UP is intensely personal. College wasn’t discussed in his community in South Jamaica, Queens, in New York. He only stumbled on the concept in sixth grade at a school in a middle-class neighborhood that required a 45-minute bus ride to reach. A friend said theirs would be the last class of the millennium to graduate college in 1999. It was the first time Haile heard the word, college. 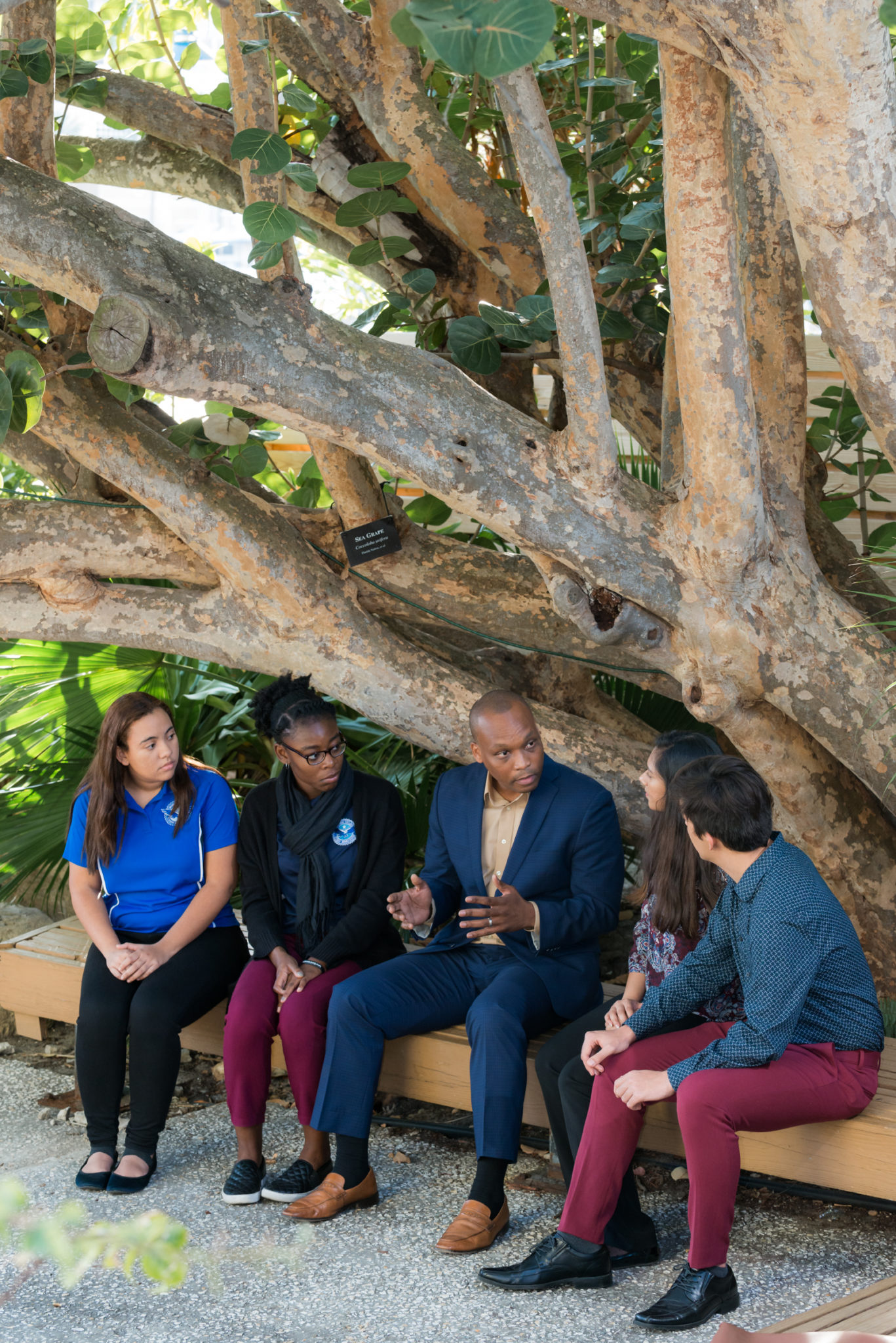 “I think about the fickle nature of me learning that word, college: How lucky I was, and how many don’t get lucky,” he says. “That, to me, is one of the greatest casualties of inequity. It’s that important things that can bring you out of the inequitable circumstances you face are not obvious and available to you.”

To target efforts, Haile and his team identified an initial six ZIP codes where high unemployment, low incomes and low education levels converged. They mapped the college’s campuses and satellite centers and found none located in those ZIP codes. They tallied just 3,000 of the school’s 63,000 students living in those areas, though the ZIP codes hold the greatest potential for training and growth.

“We need to be in communities that are dealing with these inequities, if we truly believe that we are a lever to success,” Haile told Broward College’s board of trustees. He noted median household incomes in the targeted areas run $30,000 a year, leaving many families struggling below the poverty line.

Not Your Typical Outreach

Broward UP, short for Unlimited Potential, differs from other educational outreach, however. For starters, it partners with nonprofit organizations and cities to use their existing community facilities, keeping costs low. It kicked off with bite-size learning, offered free to students—non-credit workshops, courses and certifications from one-day to six-weeks long, so learners can maintain existing responsibilities as they add job skills.

What’s more, it provides case managers to help students craft their educational path and to assist them with options for childcare and other support services. The career guides don’t necessarily recommend traditional degree programs, advising students instead to “ladder up.”

“We’re meeting the students where they are,” says Jennifer Saint Louis, district director, Broward UP Commission and Community Impact. That even means recruiting in their neighborhoods at such activities as Finally Friday on Sistrunk Boulevard in Fort Lauderdale and the One Tamarac Multicultural Festival. Chats with residents can help “bust down some misconceptions about who can go to college,” she says. For example, some mechanics didn’t know the college has programs in automotive technology.

So far, some 2,067 students have taken part in Broward UP programs, mainly Black adults, says Saint Louis. They’ve trained at such locales as Boys & Girls Club, where parents also can drop off children for activities, and in sessions online. Broward College has raised about $6 million to date to cover student costs, tapping foundations and other donors, including Bank of America and Florida Blue, says Saint Louis.

“A complete blessing” is how Hollywood resident Arnel Polo describes the program. At home after surgery this year, the 58-year-old dad earned certifications in Microsoft Excel, project management and Lean Six Sigma yellow belt—short courses that likely would have cost him $2,000. “I paid zero, through the grace of God,” Polo says. “And this makes me more marketable.”

Polo came from Haiti at age 20 and earned an associate degree in electrical engineering at Broward College, becoming the first in his family with a college diploma. But he then put off dreams of a bachelor’s degree because of family, work and financial responsibilities. Now, he plans to pursue that degree: “Broward UP inspired me all over again,” says Polo. “A bachelor’s for me means empowerment, potential for bigger opportunities.”

Even Tallahassee is taking note. Michael Williams of the Florida Chamber of Commerce Foundation calls the program “a smart way” to reach residents “who need more tailored services.” He runs the Florida Prosperity Initiative uniting business to help end childhood poverty. Williams says he likes how the “place-based approach” addresses barriers, such as transport, daycare and costs. And he appreciates how the college is working with business to offer the job skills needed.

“The business community is the one that will benefit first in terms of filling positions that are vacant,” says Williams. “And after COVID, there will be a lot of people who are going to need upscaling to meet requirements for new jobs.”

Why It Pays to Educate

While the training requires some expense, the costs of not training are high and rising, Broward UP backers say. That’s because some 65 percent of jobs require a credential beyond high school, such as certification for medical billing, according to a 2018 report from Georgetown University’s Center on Education and the Workforce. And future jobs likely will require more digital and certified skills.

That explains why Fort Lauderdale partnered with Broward UP this summer, excited that the program dovetails with the city’s own efforts to boost workforce development, says Zoie Saunders, chief education officer. “They’re doing it in a very sustainable way by leveraging the existing resources and expertise of partners,” Saunders says. The program won’t require any extra spending by the city.

In Tamarac, the city started Broward UP classes at municipal facilities last year, switched online this year and “can barely keep up with demand,” says economic development manager Lori Funderwhite. “Now, it’s even more needed in our community, as unemployment has risen.” 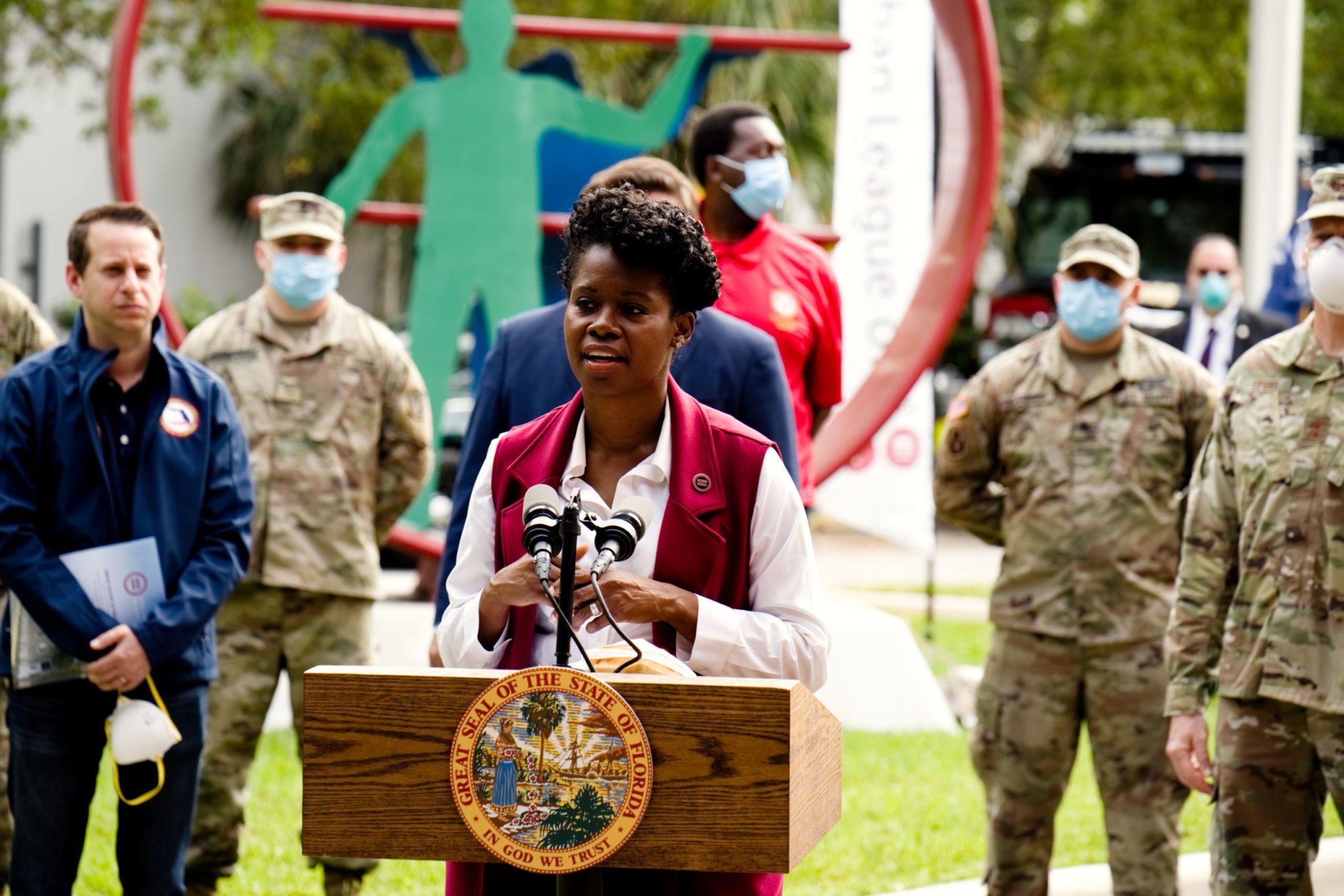 Germaine Smith-Baugh, CEO and president of the Urban League of Broward County

To test the concept, the Broward UP team worked with the Urban League of Broward County, offering classes at its modern Fort Lauderdale center. League CEO Germaine Smith-Baugh, who holds a doctorate in organizational leadership, credits Haile’s passion to share his personal story with helping the initiative scale up fast. The program now partners with at least nine cities and 16 nonprofits, and it’s sparking discussions across Broward and beyond about equitable access to education and equity.

“This is about ways to create equitable access,” Smith-Baugh adds. “And I think in these times, if we are not thinking that way—as business leaders, educational leaders, community leaders, elected officials, the regular Joe and Jane on the street, then we’re not thinking.”

Inequity doesn’t exist by accident, Haile recognizes. “Think about the ability to afford college. Most families in this country built their wealth from housing. In the 1940s, ’50s and ’60s, my mother grew up in South Carolina, when if you were African-American, you were not allowed to buy homes in certain neighborhoods. You were not going to get insured to buy a home … And we know there were covenants [in New York and elsewhere] that said you cannot sell your home to a Black person.

“All these elements have made it difficult for Blacks to engage in the primary source of wealth-building,” Haile adds. “We’re talking about individuals not being able to afford college, because they didn’t have certain resources transferred to them by their parents or grandparents.”

So, what would success with Broward UP look like for Haile, a Columbia Law School graduate who now has two young daughters?

The 42-year-old dad recalls when the city of West Park asked to fly the Broward College flag at the building offering classes, “so everyone in this community knows that there’s a college in their backyard. And when I think about the ultimate,” Haile says, “it’s 15 years from now, someone telling the story, and saying: ‘I was four years old, and I was walking past that site, and I saw that flag, and I said, ‘College? What’s that?’

“And now, they’re going to college, because of that recollection, that moment of us making it impossible for them not to know what college is.” 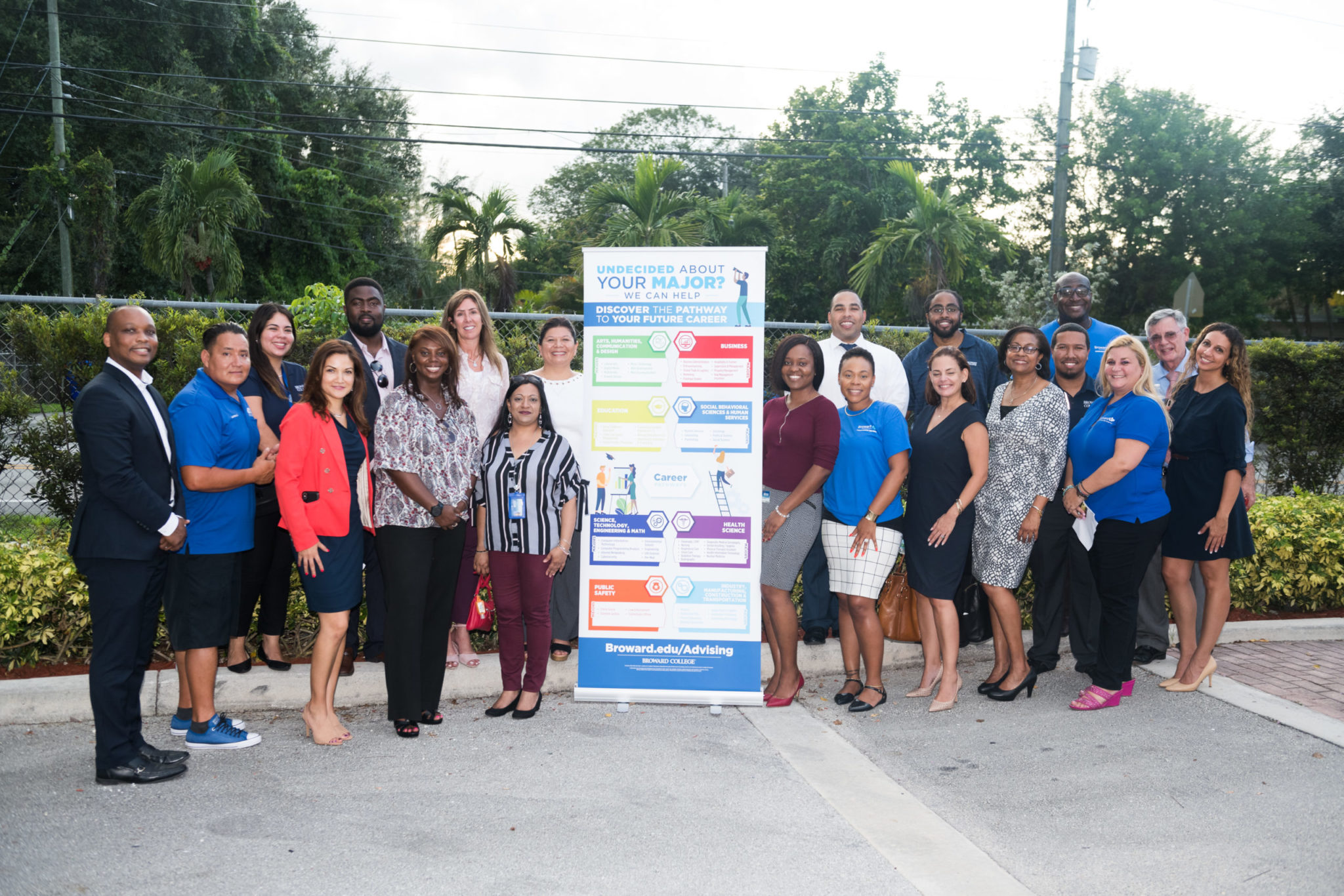 Broward UP: At a Glance

Funding: Donors cover costs for classes for ZIP code residents, with Broward College providing some staff. Roughly $6 million in donations have been raised so far from groups, including Bank of America, BankUnited, Florida Blue, the Florida Governor’s Job Growth grant and SunTrust.

Inequity: Just 27 percent of residents ages 25 to 64 in the six targeted ZIP codes have associate degrees or higher, versus 44 percent across Broward. Median household income in the targeted areas averages $30,000 a year.