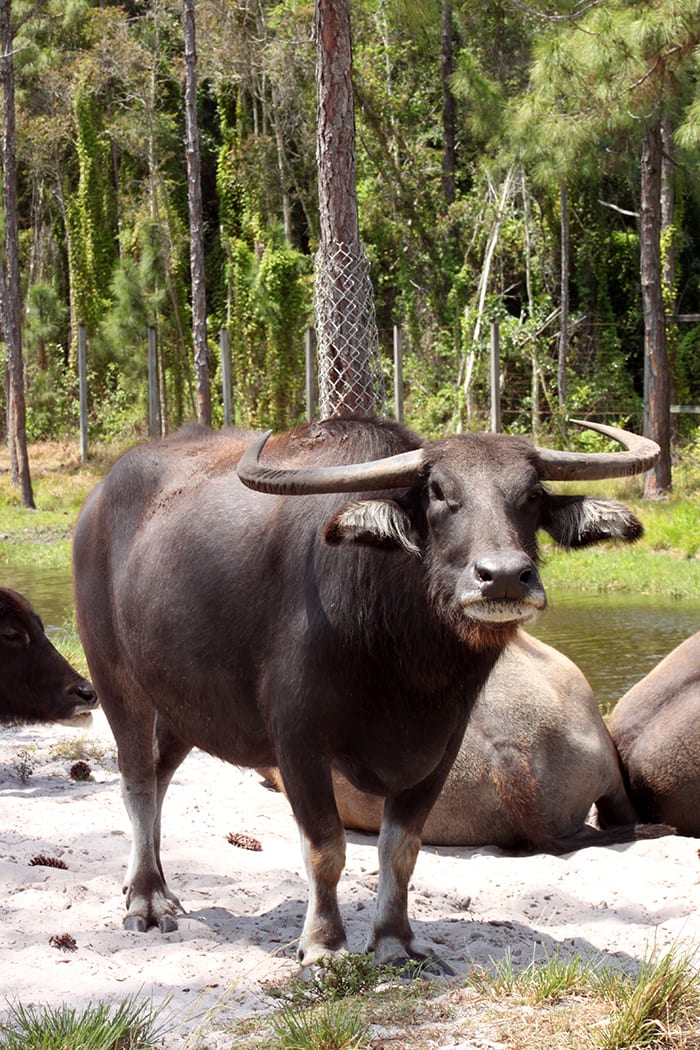 It is a quiet drive as you make your way through the wide, open spaces of Palm Beach County where there is little more than farm fields and private residences with barns. Just past the park entrance is the gatehouse where you begin the real journey into the heart of darkness known as Lion Country Safari, African Adventure!

Visions of watching too much National Geographic danced in my head, but what – or who – greeted us first was the large, 100-year-old Aldabra Tortoise known as Lancelot. We had the good fortune to get a private tour with the General Curator of Lion Country Safari, Brian Dowling. He took us up close and personal with the amphibious behemoth, who was friendly and eagerly stretched out his neck for some attention.

The first Lion Country Safari opened in West Palm Beach in 1967, and is now the only one currently remaining. Brian has been with the park for 17 years, starting at the bottom and slowly working his way up through the ranks including the position of lion keeper for 8 years. “I really feel like the lions are my niche because even now as I make rounds of the whole park, they respond to me and even my truck when I pull into their area.”

Each area has a mix of a different species from ostriches to zebras to rhinos, with a total of 1,017 residents. This will be the closest you can get to the environments of Africa without flying over the ocean, with both the largest zebra herd – 68 altogether – outside of the dark continent, and the only zoo or park to have an entire lion pride. “We don’t just take in one or two animals of each species, but take in several. If you just take a couple, like most zoos do, you remove the ‘politicking’ of the social order and they quickly become domesticated,” Brian shared.

When asked what the most surprising thing he’s learned about the animals, Brian answered, “The rhinos are one of the most affectionate animals you’ll get to know.” True to form, the rhinos were eager to stand up and come over when Brian called to them, putting their faces close enough to the window for us to reach out and pet them.

There is so much more to Lion Country Safari beyond the driving tour. Safari World is the walking portion of the park that contains a restaurant, gift shops, petting zoo, mini-golf, a Ferris wheel, gator show, small boat tour and more. The giraffe feeding area is a must-do where you can give leaves of lettuce to Cupid and the rest of his long-necked family. And make sure to bring your swim suit for Splash!, the water playground where you can cool off during the hot day. There are also safari day camps with various themed weeks as the kids learn about their favorite animals and the different African habitats.

With so many species of animals becoming endangered and only found in captivity, it is a truly unique experience to view these beautiful creatures as they would be in the wild. Do not hesitate to take a day trip and visit. Make sure to give Cupid a leaf of lettuce for me.