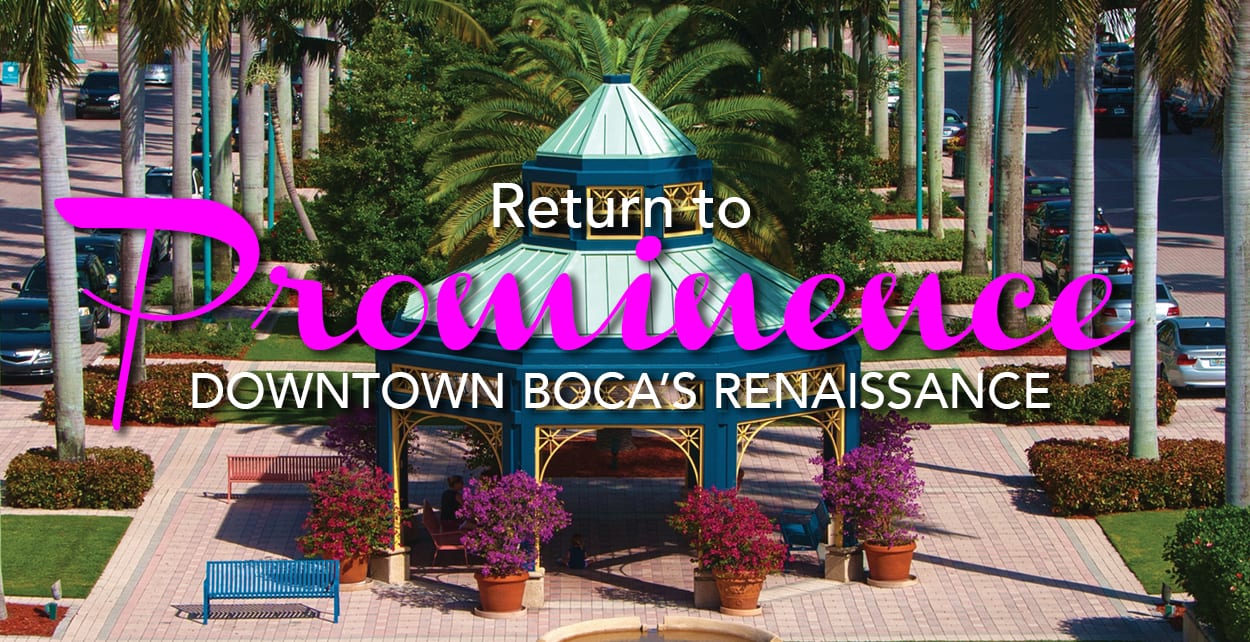 The Renaissance of Boca Raton

Downtown Boca Raton is in the process of reinventing itself in the mold of Mizner Park — a place to live, work and play amidst the urban fabric

Five years ago when the economy took a huge dip everyone felt the effects. Even affluent areas shuddered from the recession. People had their homes foreclosed; young, single professionals had to return to their family nests; and businesses declared bankruptcy or simply left their locations in search of lower rents and cheaper overhead. Even Mizner Park and downtown Boca Raton, despite a well-heeled customer base, felt the downturn.

Now, however, there is a shift in the mood. New projects are ready to spring up, many with luxury condos and rental apartments designed to attract young adults. Several new businesses have appeared as well, from retail shopping to fresh, new restaurants and entertainment such as the cutting-edge iPic Theater. Boca Raton currently has 1,714 residential units downtown, with 1,000 more approved — and many more on the drawing board awaiting approval.

What’s driving the new boom is a return of the economy that the bottom dropped out of in 2007. While Boca Raton never completely lost its customer base of year-round residents and seasonal snowbirds, young adults who had gone back home are finding a new wind beneath their wings — the return of their buying power. The usually upwardly mobile 20-somethings (and older) are once again on the climb, and they can finally venture back out to eat, shop and find a place of their own.

“I’m glad I have the spare room for friends when they come downtown to visit me, but maybe they can get their own place now,” says Kara Aleksic, a 25-year old professional and resident of the downtown area for the last three and a half years.

The return of Lord & Taylor this past October to Mizner Park, with its first full-line Florida store in a decade, is a sign of the times. Another is a planned Trader Joe’s in the downtown area. “We love Boca Raton. It’s a great community filled with lots of foodies,” says Alison Mochizuki, spokesperson for Trader Joe’s. “We’ve been looking forward to having a presence in the neighborhood.”

While many of downtown’s residences are luxury condos, the new wave of high-rises calls for more rental units to cater to young urbanites. The expansion of FAU and its army of graduating students are helping feed this demographic of young professionals who want a “live, work and play” urban lifestyle within a walkable community. “I love living down here. A lot of the times we [my room-mate and I] just sit outside one of the restaurants and people watch most of the night,” says Aleksic.

Downtown Boca Raton had an architectural heritage, but like many South Florida urban areas, it slipped amid a flight to the suburbs. In the 1920s, architect Addison Mizner had a vision of what downtown Boca Raton should look like. His style of Mediterranean Revival and Spanish Colonial Revival architecture is what defined Boca from other areas. One of his chief designing principles was “Florida is flat as a pancake. You must build a strong skyline to give your building character.” This is seen in the distinctive design of the Boca Raton Resort & Club, two of the large city administration buildings, and twenty-nine other homes in the area he designed

By 1980, downtown Boca had slipped enough that the city designated 344 acres as a community redevelopment area (CRA). The purpose: To stop the deterioration of the area and give people a reason to come to downtown Boca Raton. In 1982, the City Council adopted guidelines for land use control and for a transportation and parking concept and design to be implemented in redeveloping the area. But, the area continued to languish.

In 2007, the CRA of Boca Raton retained Urban Design Associates, an architectural consultant company, and revisited the downtown master plan. The area was examined not just from the practical aspects of traffic and parking, but also from the perspective of daily residential life and the pedestrian point of view. Like many other cities, Boca Raton developed a new urban vision that would mix offices, residences, civic buildings, shopping areas, dining establishments and cultural venues. That would also make it an attractive destination for visitors.

Creating a better sense of place

The CRA is addressing the lack of cohesion among areas including Mizner Park (named after the architect), the lively Sanborn Square, the casual Royal Palm Plaza and the beaches. A couple of years ago, it was not a walkable downtown with many stark and empty gaps that were less than pedestrian-friendly. The CRA has widened sidewalks and improved crosswalks, and continues to beautify walkways (such as plans to install striking new arches at Sanborn Square at the north and south ends of its promenade). Enforcing and adjusting current building and design guidelines should help create a friendlier flow for visitors and more connectivity between the existing areas.

“We had all the elements in place for the private sector to come in. So when the economy improved, we were ready for take-off,” says Ruby Childers, chairman of the CRA. That’s happening now.

The Mark at CityScape, Tower 155, and Via Mizner projects will help bridge the current gaps that affect the downtown’s connectivity. The Mark at CityScape is already under-construction as a 208-unit multi-family residence and 18,052-square-feet of retail space at 120 E. Palmetto Park Road. It’s scheduled to open in the first quarter of 2015.

Tower 155 plans to break ground in early 2014; originally planned for 209 condominium units, it has since adjusted to 192 larger units in response to forecast demand and city council requests. “The design and quality of Tower 155 is certainly something new and fresh for this overall market/region for a project of its size,” Derek Vander Ploeg of Vander Ploeg Associates (the architectural firm behind Tower 155) says. The development is expected to link Mizner Park to Royal Palm Plaza.

Via Mizner, is a prime example of the direction the CRA wants most projects to take. It is geared towards young urbanites wanting to be in the middle of it all. The multi-phase development will contain 365 rental units, a boutique hotel, office space, and expansive retail and dining.

The one obstacle that the CRA has recently addressed after 10 years of sitting sedentary is the fissure between the downtown area and the beach where the popular hot spot Wildflower once stood. Back in the 1980s, the pink waterfront restaurant and bar was packed shoulder-to-shoulder when night set on the downtown area. In 1999, the happening nightclub finally closed its doors; the building not being leveled till 2009. There have been proponents for making this a public space to compliment the downtown and nearby beach, including those on the City Council and interested individuals from the area. “The Wildflower property, the house to the north, and Silver Palm Park with the boat ramp need to be looked at holistically and is a much more complicated redevelopment effort than just simply replacing one restaurant with another, to only have history repeat itself,” Vander Ploeg says.This last December, the Hillstone Restaurant Group was the sole submitter of a proposal for the Wildflower property. While the City Council was expecting more proposals, this by no means lessens the one put forth by Hillstone for a waterfront restaurant, considering the fair amount of restrictions that come with the space.

Currently, there are no dining establishments with either an ocean-view or a view of the Intercostal. The current proposal by Hillstone includes patio dining, dockage, finger piers, and a public space linking to Silver Palm Park. “Personally, I’m excited to see what they put up. Then I can people watch on the water,” Aleksic says.