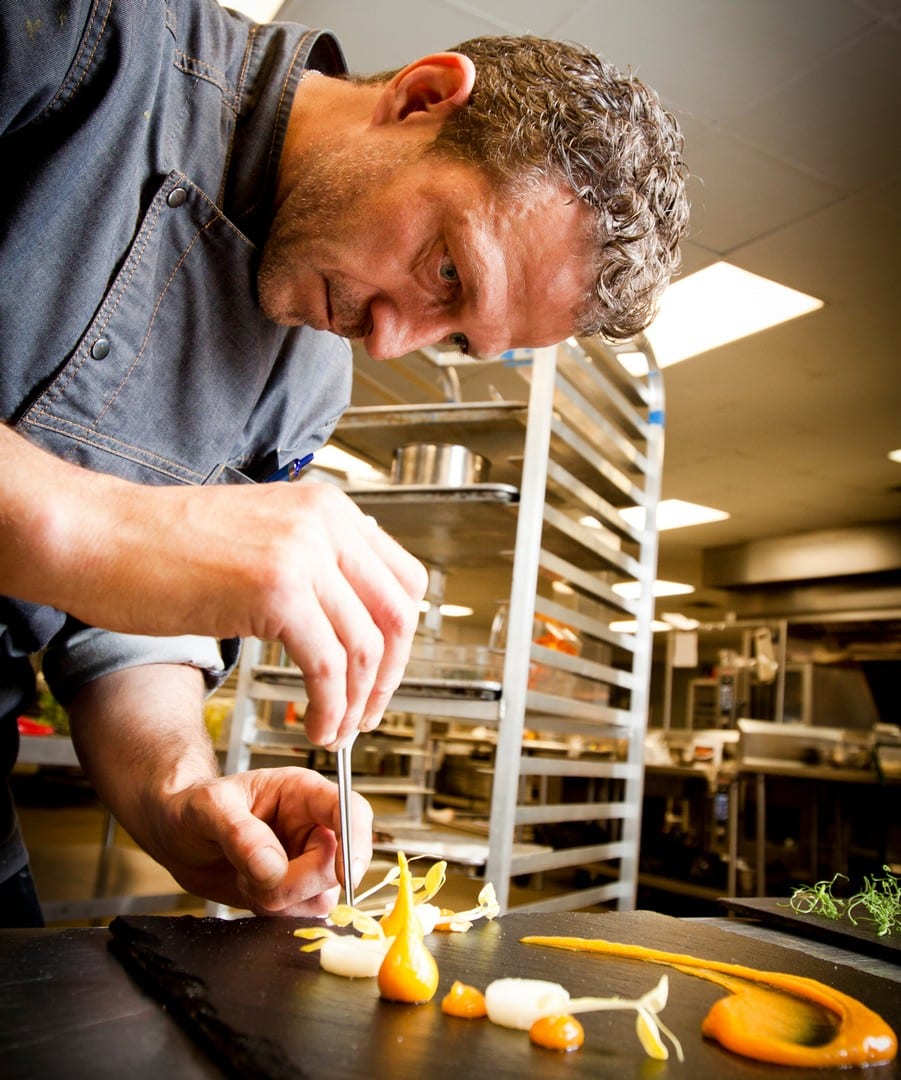 If the mother of all U.S. art fairs is looming large for the dedicated kitchen crew at Thierry Isambert Culinary and Event Design, it doesn’t show. It’s less than two weeks until the renowned Miami-based business takes up the ultimate catering gauntlet—producing five-star feasts at more than 60 events during Art Basel week in early December.

Yet the company’s Belgium-born executive chef, the aptly named Vincent Gourmet, appears as cool as the liquid nitrogen that he’s been known to incorporate into certain recipes. In the end, he explains, it boils down to simple math.

“We can do events for as many as 1,200 people,” says Gourmet, who had his own award-winning restaurant in Marbella, Spain, before joining Isambert in 2012. “We’ll have three chefs per line, with a max number of 150 guests per line. But whether it’s 100 people or a thousand, the timing is the same. We have between 15 and 20 minutes to serve everyone in the room.”

As impressive as the sheer volume of plates can be, it’s hardly the catering team’s only measure of success. Borrowing a cue from the company’s namesake (Isambert has been honored twice since 2009 with the Mérite Agricole medal by the Ministry of France for his culinary excellence, business integrity and charitable work), Gourmet consistently looks beyond the limitations of cooking for large groups at celebrations, nonprofit galas and corporate events—and instead sees only possibilities.
Look no further than the dish he created just for Lifestyle—one, he notes, that could easily end up as a menu option for clients. The plating of Mishima Ranch wagyu beef with truffle wafu glaze, microgreens and stone potatoes exemplifies the artistry and the trademark surprises that Gourmet enjoys bringing to the table.

“What you see isn’t always what you experience,” he says. “Our goal is always to make the impossible possible—on the largest stages.”

1. Top it off: “The truffle wafu glaze was originally a straight vinaigrette, but two years ago we tried to re-create the sauce specifically for beef. Truffle wafu is a typically Japanese vinaigrette; the acidity of the soy sauce, the sweetness and the truffle flavor [work together to] provide a nice kick with the beef.”

2. Only the best: “In America, Mishima Ranch wagyu is probably the best brand of beef, beyond the authentic Japanese wagyu. Most of the cattle are [raised] in California; we have a Fort Lauderdale-based supplier for our stock (Halperns). This cut is a traditional rib-eye; it’s a simple beef to cook. The best way is on the grill and then a flash in the oven.”

3. Turn to stone: A chemical process, incorporating lactose and agalita, is used to coat the small potatoes featured. When the coating dries, the outer shell resembles a river stone. “It really has no flavor,” Vincent says, “but it gives the potato a crunch, like a candy coating on an almond.”

4. Seeing isn’t always believing: Vincent brings a trompe l’oeil aesthetic to other dishes served by the Isambert team, but he’s especially fond of the stone potatoes. “Diners wonder if there are rocks on their plate—which is the exact result we’re looking for,” he says. “People think twice before taking the first bite. You’ll see guests waiting for the person next to them to try it first. I like that. We love to surprise the diner with a little wow effect.”

5. Going green: “We work with a company in Ohio that specializes in edible flowers and microgreens. Anytime they have something new, I’ll try to add a little piece. The thinly sliced purple ninja radish gives us color on the plate, and acidity and some heat to the taste, which works with the sweetness of the rutabaga. We keep it on ice to maintain the crispness. We also have carrot tops for the flavor—and pea tendrils, which we just like for the crazy look.”