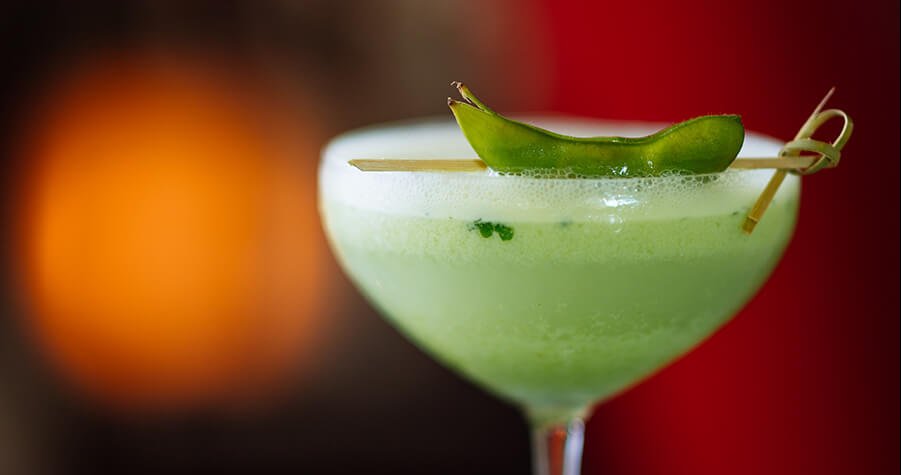 For the Sake of Sake

But beyond the food, the restaurant is best known for its robust bar program, led by Willy Estrada. More than a dozen concoctions rotate on any given day. Most recently, Estrada created the Sake Your Edamame.

“Edamame has always been a nice starter,” he says. “I love the way it tastes and looks, so I came up with a way to infuse the bean and flavors that would work with it as a cocktail.”

The recipe calls for vodka, sake, edamame-nigori purée, shiso leaf, lemon juice and lime juice, topped with an open edamame pod. Mixing the spirits with the puree creates a frothy texture with a light, pleasant flavor.

“I wanted to use ingredients that are commonly found in Asian cuisine,” Estrada says. “I combined edamame with nigori sake, a spirit that has a long-lasting tradition in Japan, to give the edamame the right texture for a cocktail. I added shiso leaves, a touch of Yuzu and homemade syrup to create a well-balanced flavor.”

Estrada warns the cocktail might fool you at first. The combination of the shiso oils, edamame and sake give the drink a green apple taste, he explains. “You smell an herby aroma, but when you try it, you get a completely different flavor than you expected,” he says.

For anyone trying the cocktail on a visit to Komodo (801 Brickell Ave.), Estrada recommends an order of Thai beef jerky flavored with coriander, galangal and lemongrass.

Add all ingredients to a cocktail shaker. Shake vigorously and strain into a coupe glass. Garnish with an open edamame pod.