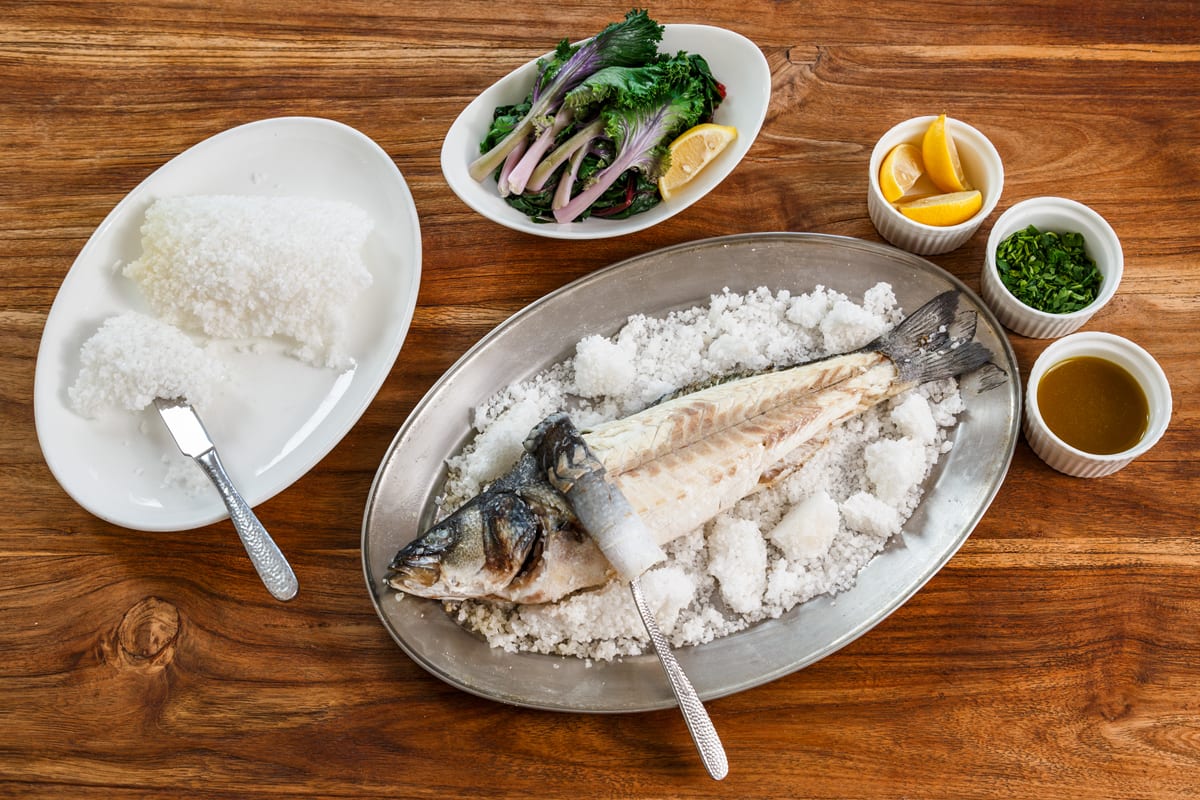 When Andy Tsavos was 10 years old, his father, a restaurateur of Greek heritage, moved the family 5,000 miles across the Atlantic Ocean, from Royal Oak, Michigan, to Patras, Greece.

“For the first few years, my father took time off work to travel and introduce us to Greece and our heritage,” Tsavos recalls.

It changed his view of the world and of food. “When you grow up in a place like that, all the memories are there, the flavors, the smells,” he adds. “You know what real food is supposed to taste like.”

That’s what influences the menu at Nisi, the “casually sophisticated” Mediterranean restaurant specializing in Greek food that co-owners Tsavos and chef Joshua Wahler debuted in September. This is not the typical Greek diner-with-Formica-countertops so familiar in American culture, one brought to the United States by immigrants whose fathers and grandfathers had spent their days sipping coffee and drinking ouzo at neighborhood kaffenions.

Nisi is just as friendly but more refined. It’s housed in the former Thasos Greek Taverna in Fort Lauderdale, the vision of Gus Leontarakis and Sophia Mylona, who transformed what was once a Denny’s into an elegant restaurant in 2012. Leontarakis and Mylona tapped Greek interior designer Angelos Angelopoulos, known for his spectacular hotel interiors, to create spaces both inside and outside that were influenced by the ocean.

“We didn’t want to take too much of that away,” says Tsavos, who adds that he and Wahler made minor changes, including adding an “experience” display, a raw bar of sorts that showcases the day’s fresh fish. “We encourage guests to get up from the table and look,” Tsavos says. “You’ve heard of farm to table; we’re sea to table. Oysters, snow crab, anchovies, sardines. When people go out for dinner, they want to be entertained, so this is part of it.”

Tsavos and Wahler know the kind of presentation they want to achieve. As much about the experience as the food, the two are pros in the hospitality industry. While Wahler was competing on Season 3 of Fox’s reality TV food show “Hell’s Kitchen” in 2007, Tsavos was working as a regional director of operations for Nikki Beach Hotels and Resort.

Seven years later, the two met at Estiatorio Milos in South Beach. Wahler was executive chef; Tsavos was general manager. They wanted to be partners in business, but both swore that it would not involve a restaurant. They launched Born Foody, a meal subscription service, which delivers healthy foods for kids. But then the owners of Thasos came calling.

“We knew that Gus wanted to pass it on to someone, and he didn’t want to give it to anyone,” Tsavos says. “It was hard to say no to the opportunity.”

To taste the menu at Nisi (which means “island” in Greek) is a chance to savor some traditional Greek foods with Wahler’s inventive spins—fresh sardines atop made-from-scratch crostini; fried zucchini chips with yogurt tzatziki sauce for dipping, which Tsavos calls the Greek ketchup because “Greeks serve it with everything.” Homemade dipping spreads, which can be ordered separately or as piatela (a platter of all six), include spicy whipped feta, grill-roasted eggplant (which gives the spread a smoky flavor), organic green chick pea, the in-house tzatziki, and taramasalata, a fish roe spread. Nisi’s grilled octopus is another must, served with bean puree on the side, as is a customer favorite: feta sticks wrapped in dough and drizzled with honey and sesame seeds.

The generous menu has more than enough choices. Entrées feature a daily catch, yet sea bass is always an option. The chef also recommends guests order fish with a salt-crust supplement. The whole fish is encased in a salt shell, which is carefully removed tableside. The baking method allows salt to seal in moisture and the flavor of the fish.

For dessert, of course, there’s the requisite baklava, plus galaktoboureko, which is custard wrapped in phyllo dough, and the wildly popular loukoumades, which is fried dough soaked in syrup and topped with chopped walnuts.

Mediterranean mixology is also part of the Nisi experience. The made-to-order Chios Mist cocktail contains FOS Mastiha, made from the resin of the mastic tree, found on the Greek island of Chios.

Just another touch at Nisi to show that everything on the menu, from start to finish, is authentic.