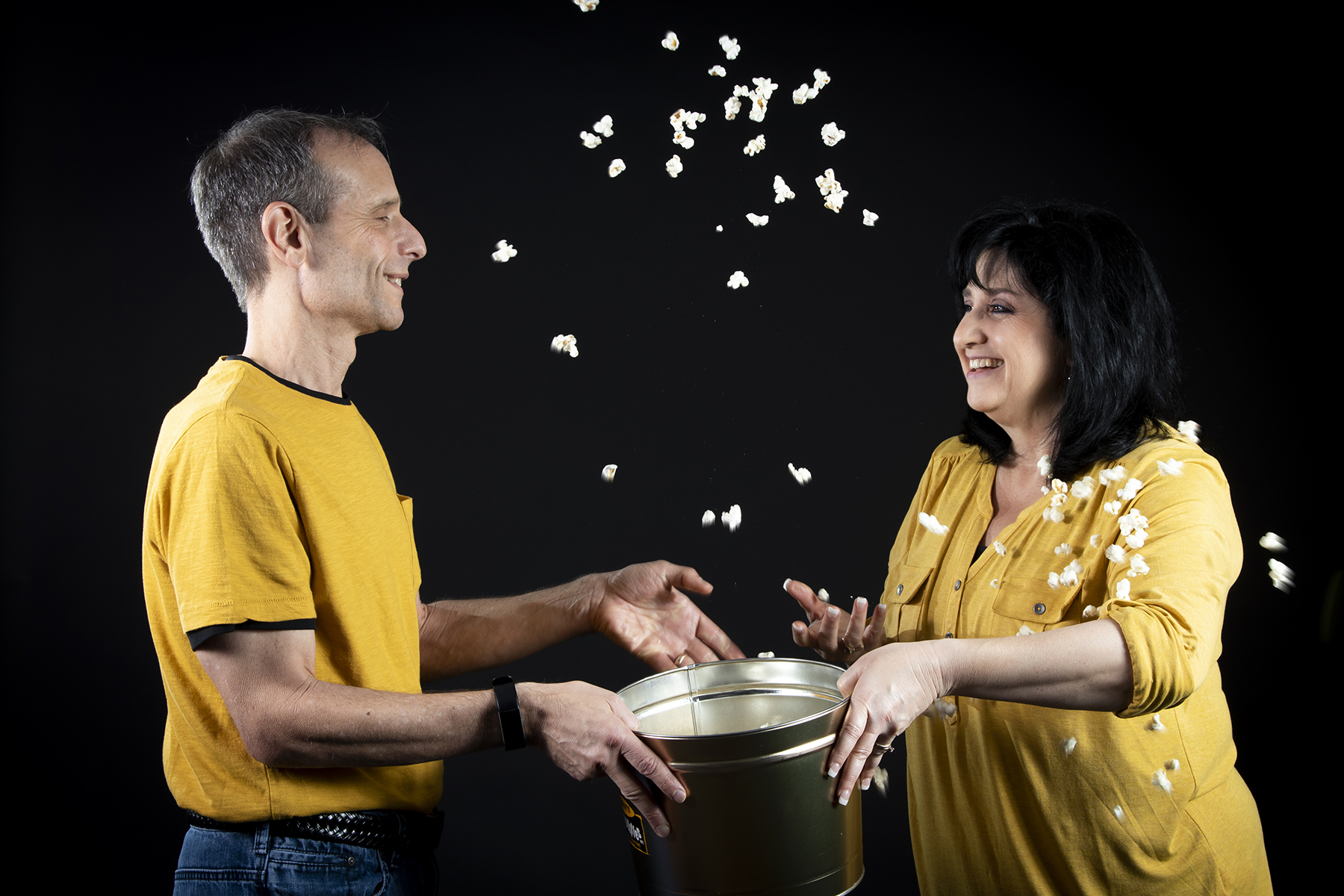 A runner and a self-described “health nut,” Howard Mintz avoids junk food. When he does indulge, only one snack will do: popcorn.

“I like popcorn, but he loves popcorn,” his wife, Lisa, says of Howard’s passion. “I enjoy it, but I don’t go crazy over it. He has the palate. He knows freshness.”

Being conscious of calories doesn’t mean the Mintzes eat packaged low-calorie popcorn. Together, the Coconut Creek couple, who have been married for 33 years, run Popcorn Possibilities (Lisa is the owner; Howard is a partner), making and selling gourmet popcorn in flavors such as caramel, chocolate, and a fusion of caramel and cheese—flavors Howard cooks up with meticulous detail.

“To get our caramel recipe correct, we had a family dinner and had 25 people come over,” he says. “We made 12 different batches of caramel, 12 different ways, and had everybody vote on it. The majority won, and I’ve used the caramel ever since.”

Their passion started in 2010 when they established the business while living in Cleveland. They learned the ins and outs of the popcorn industry during a visit to the headquarters of Gold Medal Products, a supplier of concession equipment, supplies and snacks, including popcorn.

Lisa and Howard, who have a son and daughter in their 20s, had success selling their product at a local mall and farmers market, often rotating their stock of flavors. When they moved to Coconut Creek in 2011 (they previously had lived in Boca Raton from 1998 to 2008), work and other matters forced them to set the business aside.

But when Lisa read in 2017 that the city of Coconut Creek had started a farmers market, she saw it as a chance to revamp the company.

Popcorn Possibilities was officially revived in South Florida on Jan. 1 and was introduced to Creek residents that same month at the city’s farmers market. Since then, the Mintzes have sold their product at the Boca Raton farmers market, fed Creek residents at the city’s “Movies in the Park” events, become a staple at the Mizner Park Amphitheater Summer Concert Series and made custom orders for parties (a Power Rangers-themed party called for special bags designed by Lisa and colorful popcorn made by Howard).

In October, they returned to the Coconut Creek farmers market, where the Mintzes enjoy feeding Creek residents who support local vendors.

Along the way, they’ve cultivated some loyal customers.

“We had a little old lady who said, ‘I can only buy one bag a week,’ so I held it for her, and every Sunday she would show up with her dog at 9 o’clock and purchase it,” Howard says.

Adds Lisa: “I think it’s nice that the city’s behind [the farmers market] to make it successful; we want to do our part, too, to make sure that we’re here to support our city.”

While they enjoy a successful first year in business in South Florida—and a full season of the Creek farmers market for the rest of this year and into April of next year—they’re continuing to come up with new presentation ideas to satisfy customers.

Naturally, they’re also thinking about new flavors, such as amaretto and curry. (“I love everything but the cleanup,” Howard says.)

“It’s almost like painting on a canvas,” Lisa says. “Popcorn is the media. It’s not oil, it’s not watercolor, it’s popcorn. What can you do with it? You can do anything with it. Really, the possibilities are whatever you want them to be.”

Get Ready for the Farmers Market

When Mayor Joshua Rydell proposed a farmers market for Creek’s 50th anniversary year (2017), it was about more than just offering residents a place to buy fresh goods and handmade products. For Rydell, the market also is a way to engage the community.