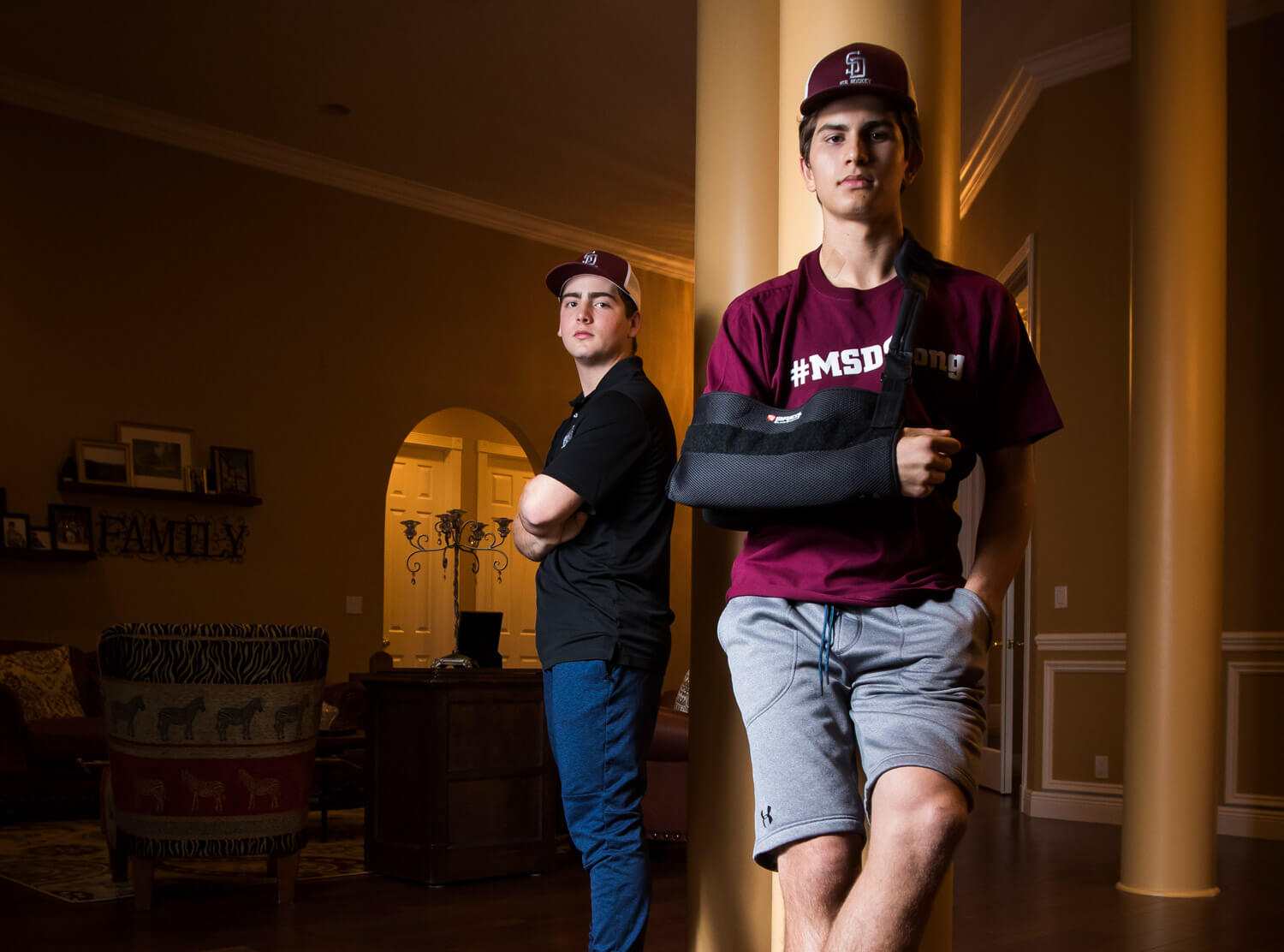 Returning to School
Jude: When they were calling attendance that first morning, and we didn’t hear the names of the [students] who died, that’s when everyone started getting sad.

Ameer: It was a relief and it was sad, seeing everyone. You saw your friends who were there [when the shooting started], you gave hugs. I had first period with Martin [Duque Anguiano, who was killed], so that was really tough. There were a bunch of girls crying.

Jude: The teachers were doing the same thing we were doing. They were grieving. We only saw each teacher for 25 minutes. We didn’t work. We just talked about life.

Ameer: A lot of the teachers brought in cupcakes and cookies. The teachers were trying to comfort us. They talked about how this will change us, and how we’ll be stronger.

Jude: Some people were saying how lucky we were to miss three weeks of school. We missed three weeks because 17 people died at our school.

Ameer: You think it’s a dream sometimes. You want things to just reverse. But this is reality. We lost 17 people. I’m always thinking about them. Innocent people. The students were there to learn. The teachers were there to teach. And bad things happened, things that should never happen. Going to school now, it’s just not normal. It’ll never be normal.

The Freshman Building
Jude: There were like four police officers just standing around that building [the first day back]. There are officers around school. Police dogs. … You’re never going to forget about it because there’s so much [going on] to remind you.

Ameer: I was in the building when it happened. I saw dead bodies. They removed all the blood off the sidewalk, so that’s good. But they should put something else there instead; maybe a memorial. Something more appropriate than a building just standing there, waiting to be investigated. … No matter what, we’re going to force them to take down that building.

Jude: At least, when the building does go down, we won’t have to look at where it happened.

Dealing with the aftermath
Jude: I slept on the couch in my parents’ room last night.

Ameer: The first week and a half, for me, I slept in my parents’ room. I’m still scared of the dark [because of the shooting]. I usually walk my dog at night; now, that’s not a chore for me. My parents took that over. They understand. I just started sleeping by myself again in my room. I close my eyes, but I don’t think I’ve had a full night’s sleep yet.

Jude: I’ve always been aware of exits and surroundings. You have to be. Last year at the airport, we had a shooting. This year, at a school in the same county, we have a shooting. A few years ago, we had the Pulse nightclub shooting. Something is obviously happening in Florida. You’re not always safe and protected.

Ameer: Anyone can pick up a gun and do damage. It’s America. … There’s nothing you can do, except to be more aware.

The Loss of Friends
Jude: Peter [Wang] was in my junior ROTC class. So was Alaina [Petty]. Peter always wanted to be in the military; we all knew that. He’s always been a leader in our class. I’ve known Luke [Hoyer] since sixth grade. He was probably my closest friend of [the students who died]. He was quiet but outgoing toward friends. He loved basketball. He’d let me copy his Spanish homework. … Alex [Schachter] was in my sixth-grade band class. I’m good friends with Jaime’s [Guttenberg] brother. Alyssa [Alhadeff] I knew through friends.

Ameer: Martin [Anguiano] and Luke were the people I talked to the most. Joaquin [Oliver] came to almost all of our hockey games; he was the biggest fan, and he brought his friends. He was always the energy. … I’ve been in contact with Martin’s family. He was one of the most humble people I’ve ever met. I first met him, I think, back in third grade. I remember being in the cafeteria; he had just come to our school, and he didn’t know anybody. He didn’t speak very much English. I introduced myself. We became close friends. We were in first period on the day. We were literally laughing so hard that morning. Three periods later, he was gone.

The Freshman Class
Jude: I was talking about this with my friend. We’re freshmen. We’re going to have to go through this for four years. Seniors? They’re done. Juniors? They have one more year. We experienced this in our building, the newest building at our school, the one made for us. It’s going to be different for our class to have to live through this each year, remembering. Once we’re gone, no student in that school will have experienced the shooting.

Ameer: For the next four years, we’ll have to walk into that school and feel the energy of what happened.

Jude: It’s good what our seniors are doing; they’re forcing leaders to make decisions. I don’t want to be up there doing interviews [on TV] and speaking and yelling; there are kids smarter than me who know what they’re doing. But after the seniors leave, it’s important for the [current] juniors and sophomores and freshmen to keep pushing, to [find] our voice.