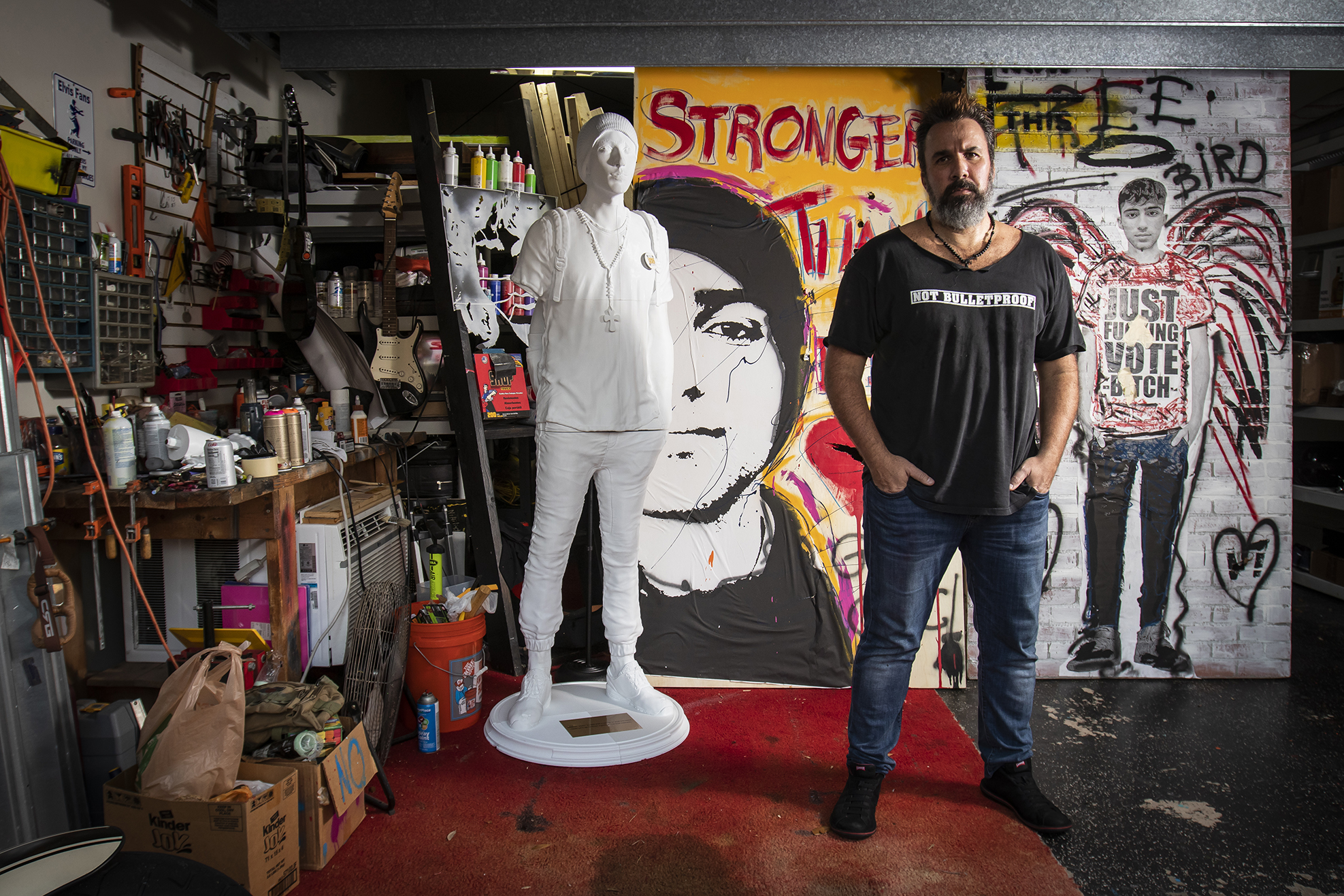 Manuel Oliver Is a Rebel With a Cause

Manuel Oliver, the father of slain MSD student Joaquin Oliver, unleashes the power of art to convey a message of change that’s difficult to ignore.

Manuel Oliver defines himself differently than he did a year ago. For one, he’s gone from artist to “artivist”—that is, he uses his art to create change. You can call him an activist, but he prefers his coined word instead. He’s also well-schooled in politics, something in which he had a layman’s interest before Feb. 14, 2018. Plus, he’s taken more trips to Washington, D.C., he says, than he ever could have imagined. There are more already penned into his agenda.

It’s a call to action that happened in the hour before he officially learned that his son, Joaquin, was one of the 17 killed at Marjory Stoneman Douglas High School—a profanity-laced, watershed moment that would ignite the trail he blazes today.

You can see why his 17-year-old son, whose nickname was “Guac,” would say Dad was his best friend. He’s the cool father, although his dark beard has a few more gray hairs in it than a year ago. He’s a self-proclaimed rebel, and proud of it.

If his rebellion changes gun laws, so be it.

“My son and I are very alike. We are very rebel,” says Oliver, 51. “I know that Joaquin would be doing the same thing I am right now if I was the one who got shot. I wish I could change that. I would do it right now. But, unfortunately, that is not the case.”

Like so many other parents that Wednesday, Oliver waited at the Coral Springs Marriott at Heron Bay for news from the police and FBI—any news. Was his son unharmed and on his way to the hotel? Was he among the injured? Was he one of the casualties?

“At about 1 a.m., a number of families were [still] waiting,” Oliver says. “We didn’t know who was next to us. We didn’t know the people we know now, back then.” Oliver says he and his wife, Patricia, are now close to all the families that were in that room.

The wait became too much for Oliver. In the total silence, with everyone bewildered, sad and anxious, Oliver stood up and approached a Broward sheriff’s deputy who was there.

“Where the [expletive] is my son?” Oliver said. The deputy asked him to calm down.

“I responded, ‘Calm down? [Expletive] off. I want to know where my son is right now. I am sick of waiting here. What the [expletive] is wrong with you?’ What I did in that moment is exactly what I do these days, every day,” he says.

Around 2 a.m., Oliver and his wife learned Joaquin was one of the victims. “I made one call after crying and after realizing my desperate reality,” he says. Oliver telephoned a friend. “I said, ‘Dude, they shot my son. I need you to help me raise my voice. I need to start doing this right now.’”

Even the name of the nonprofit organization the Olivers founded is from something Joaquin said two weeks before he was killed.

Change the Ref, the advocacy group that the Olivers co-founded, uses art and nonviolent creative confrontation to expose the reality of the epidemic rampant through the United States as it relates to gun violence. The Olivers also want to let the public know about the relationships between the National Rifle Association and politicians who, they say, are influenced by financial contributions from the gun group.

Oliver tells the story that during a basketball game, Joaquin was ejected for disagreeing with the referee on a call. He told his father that he believed that the referee was receiving compensation from the other team. “He told me, ‘Dad, we need to change the ref if we are looking for a fair game.’ ”

The name and the story relate squarely to the cause, Oliver says. “It is our politicians that need to make the right calls, but as long as they are receiving money from one of the teams, there is no way to have a fair game.” 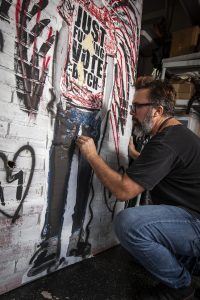 Art Does the Talking

In 2003, Manuel Oliver wanted to move his family to the United States to escape the violence in his native country, Venezuela. Patricia had family in South Florida. “We researched good schools and nice neighborhoods and safe environments in all cities, and Parkland came out as the best option.”

“You come here trying to have a better life for your kids in a First World country. I don’t regret what I did,” he says. “I did the right thing when I was supposed to do it. I was protecting my family, but now I happen to have a problem here.”

Oliver doesn’t like discussing these subjects in the same conversation. “They have nothing to do with each other,” he says. “I made the right decision moving to America. Did I make the right decision choosing Parkland because of the school? Yes. Is the system and the nation doing the right thing by letting people have easy access to guns and assault weapons? No. This isn’t a problem that ends with a school that wasn’t secure enough. This is a bigger problem than that.”

In October 2018, wearing a hooded sweatshirt emblazoned across the front with the message: “Just F**K!NG VOTE,” and with his hair dyed bright red, Oliver stood in the middle of Times Square in New York City, holding a bullhorn. Near him was a lifesize, 3D replica of Joaquin.

The world’s first 3D-printed activist, Oliver says, was meant to raise awareness about another gun controversy. A Texas man created a blueprint that would allow anyone with access to a 3D printer to assemble a gun made of plastic—one that could fire standard handgun rounds. A background check would not be needed to create or own the gun, because it’s homemade. A temporary restraining order stopped the release of the blueprints, but the debate continues.

The website allows people to turn their messages about gun violence into letters to Congress—displayed in Joaquin’s handwriting. Oliver created the font using the writings he found in his son’s spiral notebooks from Marjory Stoneman Douglas. The platform starts by finding a congressional representative’s name and address based on the visitor’s ZIP code.

From there, users can compose a letter from a social media post, create an original letter or use a sample letter. After it’s transposed into Joaquin’s writing, it’s ready to be printed and mailed.

“[Members of] Congress are going to find all this on top of their desk,” Oliver says, referring to a pile of stamped letters. “How are they going to ignore that? We are giving a voice to Joaquin so that he can talk, so he can send the message.”

Oliver continues to receive international attention. His first widely publicized “artivism” was his “Walls of Demand” project, where he and Patricia traveled across the country as he painted murals, staging the live events in politically strategic places. He held a painting rally last August in Springfield, Massachusetts, the headquarters of gun manufacturer Smith & Wesson.

These nontraditional ways of tackling the topic is what Oliver says he committed to as a way to influence people and society in relation to the gun reform movement in the United States.

“I don’t want to be doing another interview with you in 10 years and letting you know that I haven’t accomplished anything. If we talk every six months, I’ll have results to show you. I promise you that I will.”

Oliver is intent on creating a cultural movement with a purpose.

“I am going to test things that are coming from an out-of-the-box mentality, but I’m not going to stop testing them just because they are crazy ideas,” he says.

“The only crazy thing here is that a 17-year-old, beautiful kid, isn’t here anymore. You can’t get crazier than that.”

Pictured above: Manuel Oliver inside the art studio at his home on the Coral Springs/Parkland border with works that honor Joaquin— including the 3D replica of his son that he took to Times Square in New York