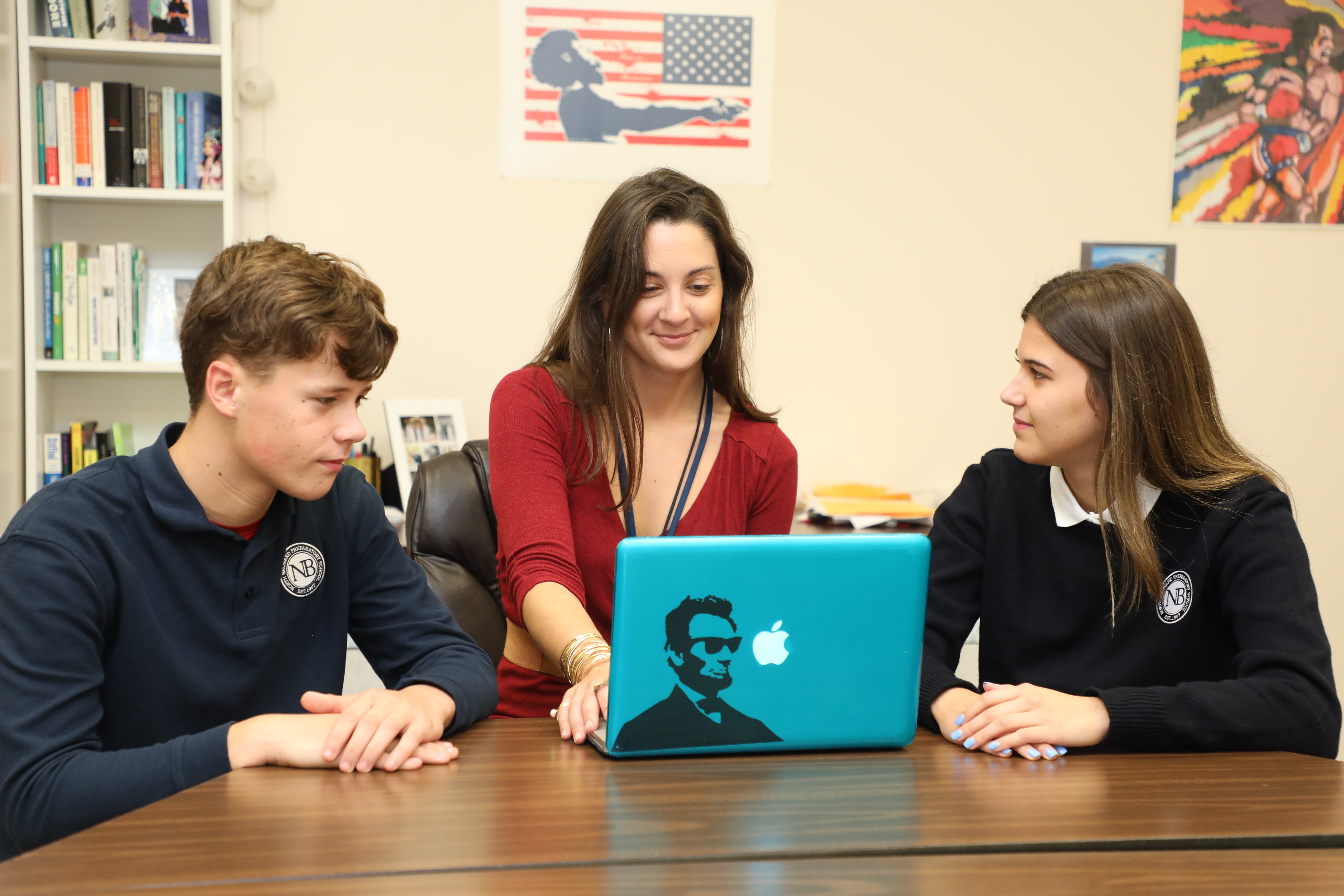 In Entrepreneurial Studies I, teams of students walk to the front of the classroom group by group to present the logo and mission of fictional brands they’ve created. After each presentation, Hall calls on other students for feedback and critiques. Throughout the 80-minute period, students applaud a classmate whose presentation skills have improved, laugh together, and ask questions about each other’s brands while Hall offers advice on how to own the presentation space and observations on group dynamics.

After class, Hall, who also teaches history, explains that the student feedback is part of what makes Entrepreneurial Studies different from other classroom environments.

“They’re so connected to each other. They’re talking to people who, in a subject class, they would never interact with; they would see no need. [Here] … another person’s progress matters to them,” says Hall, who teaches the course to more than 60 students combined. “They’re asked to do things that take them out of their comfort zone, and even though they don’t always like it, they know how important it is.”

Students Carolina and Garrett can attest to this. [Editor’s Note: The students’ last names have been withheld for privacy.] Garrett, a sophomore who aspires to be a professional baseball player but hasn’t ruled out being a manager, says it’s one of his favorite classes.

Carolina, a senior, took the class because she wants to study business in college and aspires to own a company like her mother does. She says the class is preparing her for college and connects what she’s learned to her mom’s work.

“I think it’s the most challenging class I have,” she says. “It’s not the amount of work, but it’s challenging myself—my confidence and my public speaking.”

The class is one of the three that make up North Broward Prep’s new entrepreneurial studies program, which spans three years. Over the course of the program, students create business plans and visit companies to learn how to solve real-world problems. Students such as Carolina who have less than three years of school left, may take the first class as an elective.

“The goal is to prepare them for an ever-changing professional world, where … understanding the mindset of an entrepreneur can be extremely helpful,” Hall says. “That ability to take risks, that ability to fail, but learn from that failure, that ability to pivot—all of that they need.”

The program started when Hall realized that her business and financial literacy electives were so popular that students needed more options. She visited North Broward Prep’s sister schools (also part of the Nord Anglia Education system, which has more than 50 schools around the world) to explore their business programs.

One school she visited was Windermere Preparatory School near Orlando, where, a few years earlier, Gary Conroy had started an entrepreneurial program using his 25 years of entrepreneurial experience. Conroy, whose daughters attended Windermere Prep, created The Startup Studio to support the program and, through that company, is now dedicated to entrepreneurial education around the world, including at North Broward Prep.

“We see entrepreneurship as a subject that can actually be a platform to really build kids with the skills they need in a 21st-century economy,” Conroy says. “Entrepreneurship is just our vehicle to do it.”

After meeting earlier this year, Hall and Conroy worked with the heads of school to introduce the entrepreneurial program to North Broward Prep in the 2018-19 school year. The program is built on five pillars: story (asking questions such as “How can I change the world?”), team (working in collaboration), build (analyzing methodologies and identifying problems), pivot (being ready to change) and pitch (selling themselves and learning to communicate).

Conroy travels to the school every two weeks to meet with students, give them advice and discuss the business world with them. When he’s not with students, he spends time networking to build a community for them, leading to discussions with potential partners who can work with the students in the future, such as Florida International University and SunTrust Bank. In the meantime, he and Hall are thrilled with the results.

“[There were] students in the beginning of the year who were very quiet, very scared, and didn’t really want to talk,” he says. “Now, two months later, I interact in those classrooms, and these same students are slowly becoming powerhouses. They get up and own the space and are very good.”