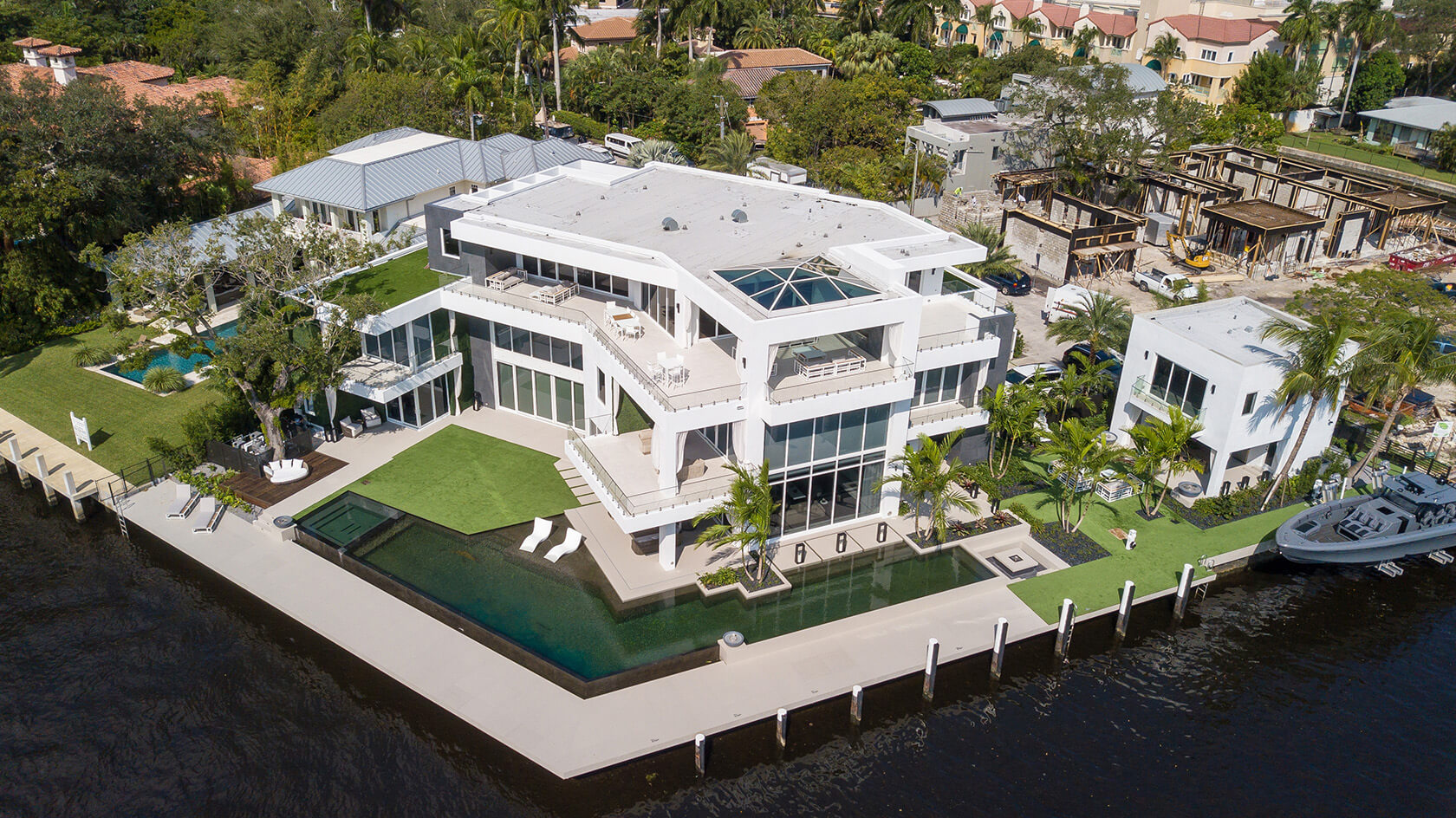 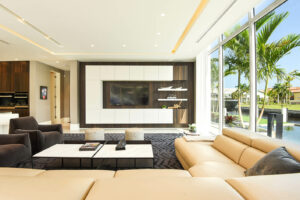 It’s not often that Ed Cannatelli has trouble seeing the big picture. But as he considers the scope and splendor of a recent residential project along Fort Lauderdale’s New River, the founder and chairman of Pompano Beach’s Cannatelli Builders admits that it’s easy to lose focus.

“It’s such a big and spectacular space that you don’t know where to look first,” Cannatelli says about the 13,800-square-foot geometric gem.

Even that may be an understatement. The five-bedroom, seven-bath estate on a coveted corner lot is a builder’s version of contemporary art. The project is uniquely framed across three floors and brimming with luxury amenities, floor-to-ceiling columns of impact windows, and designer details—like a towering two-story, double-sided fireplace; a lush Zen garden; ivy-covered exterior walls; an eight-layer ceiling treatment in the main living room; and a third-floor outdoor deck under a glass canopy. The spaces and sights are enough to make your head spin like a rotating car platform—which, yes, is yet another feature of the layout.

A project this grand and this intricate is beset with challenges, but Cannatelli takes them all in stride. He’s been learning, living and breathing the business since age 9 when his father, also a homebuilder, brought young Ed onto a job site. As Cannatelli Builders, which launched in 2002, approaches the two-decade mark with a strong industry reputation and loyal clients, its founder says the business is in the fortunate position to pick and choose projects.

“When you’re building something of this magnitude, you’re going to be married to the client for a while,” he says. “There’s a lot to manage, and that includes managing the client relationship as well as the project. [That’s why] we probably refuse as much business as we accept.”

Every so often, Cannatelli says, a special client comes along who truly “gets it.” Such was the case for the New River project; Cannatelli already had built multiple residences for the homeowner and other family members. The estate was initially built as a spec home, but the homeowner became so enchanted with the design and layout that he decided to purchase it for himself.

And who could blame him? The enviable location—a point lot on an angle with a 135-degree turn, featuring panoramic views and direct water access—couldn’t have been more perfect for the fun-loving businessman, family man, sports fan, and boating enthusiast. “It’s such a unique property on such a unique lot,” Cannatelli says. “The owner has excellent taste and a great eye, so he definitely made the most of it.”

The dream home for the buyer also was a dream creative project for Cannatelli and his team. “It was a fun house because with modern design, there are practically no limits to what you can do,” he says. “I love contemporary. It’s just a personal thing for me. With a traditional structure, there are limitations and certain concepts won’t fit. But with contemporary, it’s game on.”

Light years away from the “cold empty box” once synonymous with contemporary design, this home showcases a rich mix of materials and textures, seamlessly transitioning from porcelain to granite to wood to glass. “You take the shell, then add tile and turf, install a wood accent and stain it, and cover the walls with ivy … all of which breaks it up,” he says. “Then you light it up at night with LED, and it sure doesn’t look like a box anymore.”