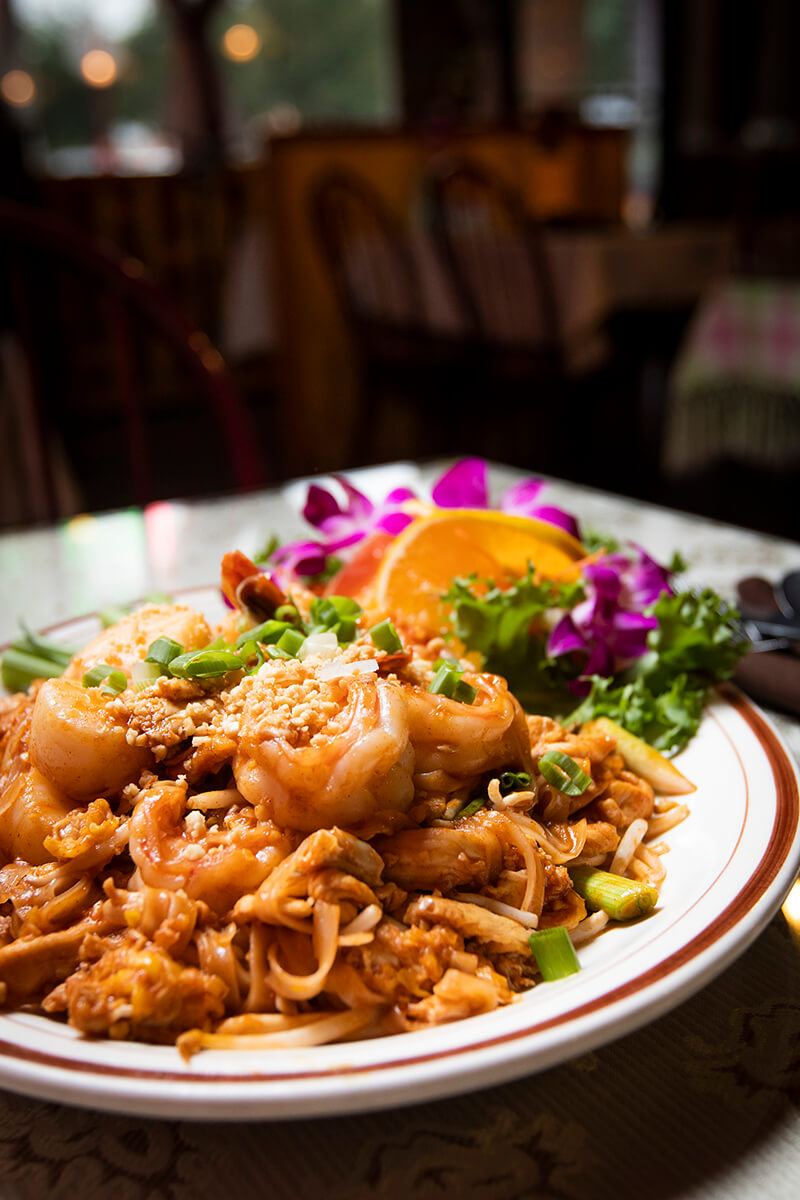 The steady stream of customers that entered Pad Thai in Margate on a recent Friday night attests to the restaurant’s status as a long-time local favorite for Thai cuisine.

It’s a familiar sight to Annie Lertworasiri, whose family has owned the restaurant for 11 years. (It previously was owned by another family.) During the years she’s helped her family at Pad Thai, she’s seen regulars grow up and bring their own children to the restaurant.

What keeps them coming back are the Thai dishes made by Lertworasiri’s mother, Deedee. Traditional dishes include pad see ew (sauteed rice noodles with egg, broccoli and soy sauce) and, of course, pad thai (stir-fried rice noodles with shrimp, scallops, chicken and other ingredients). Chef specials include duck, Chicken Volcano (fried whole chicken breast breaded with flour and served with red chili sauce) and deep-fried snapper.

But even regular customers can precipitate change. As Nick, Lertworasiri’s father, puts it, regulars started asking him why the restaurant served only Thai dishes as their children preferred sushi.

“Around here, most of the Thai restaurants do offer sushi,” Annie says of their decision to add sushi to the menu. “In the beginning, [we wanted] to stick to Thai food, but we have to evolve with the market.”

Last April, the restaurant’s owners introduced sushi to the menu and eventually hired friend and chef Scotty Sriwan to make it. Sriwan, who also is Thai and began learning about sushi 18 years ago, says Japanese cuisine is the “food of art” because of its adaptability to creativity and pleasant presentation.

Using his experience from working in restaurants in Colorado and South Florida, Sriwan lets his imagination run wild. For instance, he tops off hamachi crudo with a sauce made of Thai chili paste (used in Thai tom yum soup) and a cilantro sauce of his own creation, which Annie notes “gives it a spicy kick that has a Thai feeling to it.”

A special treat is Sriwan’s omakase, a chef’s-choice serving style, which runs the gamut of choices, including oysters and sea urchin. Sriwan jokes that sometimes customers come and say, “Scotty, feed me” and let him run the show.

This customer voice is a high priority for Sriwan and the Lertworasiris, who listen to their diners’ needs, suggestions and requests.

“Most people who order [omakase] will know what they like and don’t,” Annie says. “So if they tell the chef ahead of time that they don’t like eel, he’ll omit that from the selection. But it’s adventurous and having fun with your food.”

An example of an omakase
presentation

When she isn’t working full time as a software engineer, Annie takes advantage of Sriwan’s creativity, testing his new recipes and posting them on Pad Thai’s Instagram page (@padthaimargateofficial). And lucky for her and Pad Thai’s customers, Sriwan isn’t slowing down anytime soon.

“I try to create every week—keep going nonstop,” he says. “When people come, they get the new stuff every single time.”