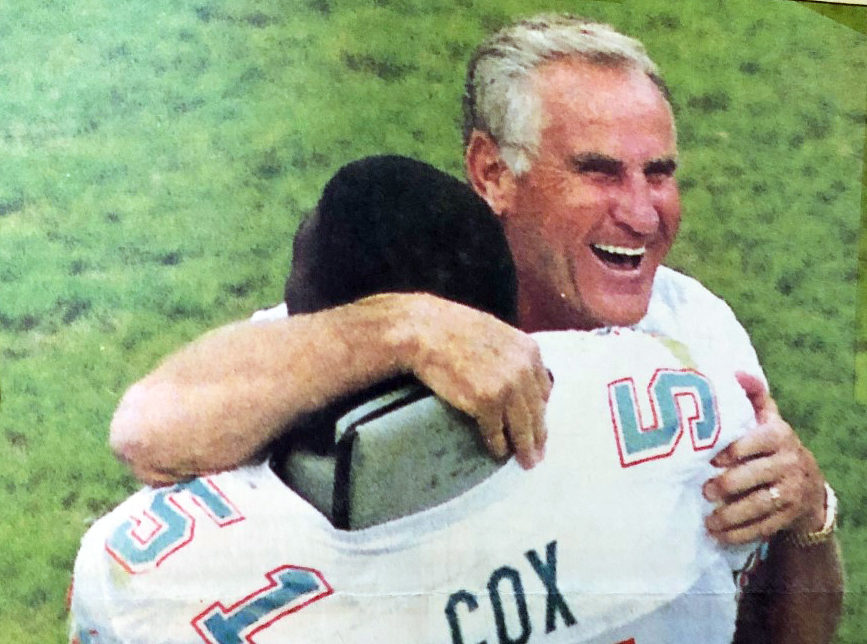 Amid the pandemonium that engulfed the Miami Dolphins’ sideline at Philadelphia’s Veterans Stadium on Nov. 14, 1993, two players—offensive guard Keith Sims and defensive tackle Larry Webster—had covertly maneuvered into prime position, ready to launch the celebratory splash that had become so familiar to sports fans.

But special teams coach Mike Westhoff was having none of it. The Dolphins’ Don Shula had just surpassed George Halas as the all-time winningest head coach in National Football League history, a 19-14 come-from-behind win over the Eagles during which Miami, already without Dan Marino for the season due to a ruptured Achilles’ tendon, lost its backup quarterback, Scott Mitchell, to a shoulder separation. Westhoff, appreciating the magnitude of Shula capturing victory No. 325, let alone doing it with a third-string quarterback, yelled at Sims and Webster to drop the Gatorade bucket.

“Get everyone together and carry him off the field on your shoulders,” Westhoff screamed above the sideline delirium. “Shula deserves to go out that way!”

More than any NFL head coach, Don Shula, who died today (May 4) at age 90, found a way to win. He did so 347 times over 33 seasons, 26 of those with the Dolphins. He did it with Hall of Fame quarterbacks (Marino, Bob Griese, Johnny Unitas). He did it with a No-Name Defense. He did it with backups and busts. He did it with an old-school punishing ground game. He did it with a modern-day aerial assault. He did it in an era of crew cuts. He did it in the era of free agency. He did it as the youngest coach in NFL history (33 when the Baltimore Colts hired him in 1963. He did it until he was 65. And he did it, incredibly, while only posting two losing seasons.
I’m reminded of that 1993 scene in Philadelphia today for a couple of reasons. For one, I was there, standing within earshot of Westhoff that afternoon in Philly as the final seconds ticked off. Back then, I was covering the Dolphins as a beat writer for the Gannett News Service; overall, I would report on Shula’s final six years with Miami, a period that had its share of wild highs and gut-wrenching lows.

By the time I caught up with Shula’s career, even his legend was legendary. There was the single-minded focus, to the point where he had no connection to pop culture; during an encounter with Don Johnson during the height of TV’s Miami Vice, Shula thought the actor actually worked for the local vice department.

Members of the Dolphins’ 1972 team, still the only perfect season (17-0) in NFL history, loved to share war stories about their coach’s attention to detail. “I remember a game against the Jets where the referee spotted the ball wrong,” former running back Mercury Morris once told me. “We’re talking about two-tenths of an inch off. Shula goes nuts. He starts screaming, ‘You have no guts! Make the call!’ The ref comes over to the sideline, and Shula gets right in his face and yells: ‘THIS IS MY LIFE!’ ”

His regimen rarely deviated. On the road, because coaches meetings lasted well into the night, Shula always stocked his hotel suite with the following: a chalkboard, chalk, erasers and a pointer; 12 Michelobs (six regular, six light); six Diet Pepsis, six assorted soft drinks; a bowl of nachos, pretzels and chips; and a fruit tray.

Early in his career, as the story goes, Shula encouraged players to refrain from sex from Tuesday until after the game on Sunday—but he soon realized he was fighting a losing battle on that front.

Though his fierce jawline had softened a bit through the years, Shula could still dress someone down when the situation called for it. At a preseason press conference in ’92, I was busy reviewing my notes instead of following the line of questioning. When I asked about a second-round draft pick, who already looked like a probable bust, Shula went ballistic—because another reporter, two questions before, had posed the same question. “Pay attention to what’s going on!!” he snapped at me. “Am I going to have to put up with this crap all season?”

The 1993 season should have been special. The year before, the Dolphins reeled off six wins to start the season, dropped five of seven, then won four straight to reach the AFC Championship—their last visit to the conference title game. In ’93, they were off to a 3-1 start when Marino blew out his Achilles during a game at Cleveland. Scott Mitchell would come off the bench to help Miami win two of three before he was injured at Philadelphia. Miami then signed 39-year-old Steve DeBerg to lead them at quarterback—and he won back-to-back games, including a ridiculous Thanksgiving classic in the snow at Dallas.

At that point, Miami was 9-2. They’d finish the year 9-7, dropping five straight down the stretch, four of them by a touchdown or less. Shula probably deserved a better fate in ’93. For 11 games that year, he pulled everything he could out of a team that had no business winning nine of its first 11. It reminded me of something that former offensive guard Bob Kuechenberg, who played 15 seasons (1970-84), once told me.

That was certainly true on Nov. 14, 1993. And it helps to explain why a third-string quarterback named Doug Pederson could guide Miami to its second-half comeback. Nearly 25 years later, Pederson would get a victory ride of his own—as head coach of the Eagles after their Super Bowl win over the New England Patriots.

But on this Sunday, it was another coach’s turn. As his players carried him off the field that day, I wrote down in my reporter’s notebook that I’d never seen the graduate of John Carroll University in Ohio happier than he was in that moment.

Once again, Donald Francis Shula had found a way to win. And in doing so, he had reached the Mount Everest of his profession. He had earned his ride.