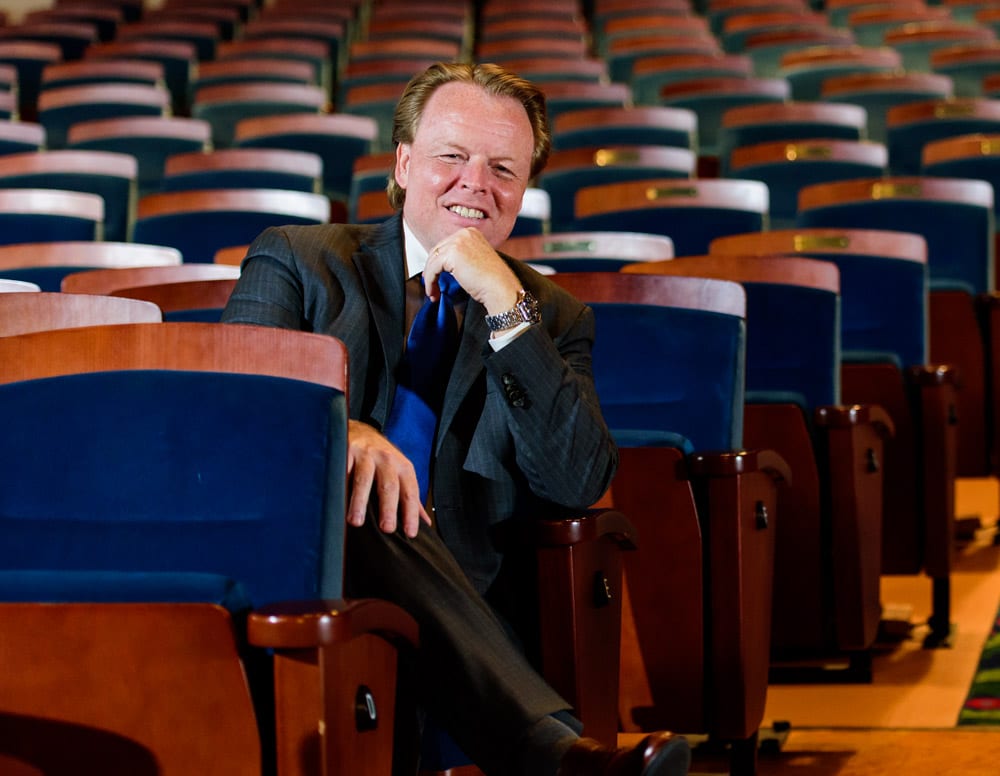 When the curtain rises at the start of each Broadway season at the Broward Center for the Performing Arts, President and CEO Kelley Shanley admits he still gets butterflies. He likens it to the first time he ever stepped onstage – over 30 years ago as Alfie Doolittle in his high school’s production of “My Fair Lady.”

“That was just a really exciting moment when the curtain opened and I thought, ‘Here we go, we’re gonna do this,’” Shanley reminisces. “Ever since, I’ve had such a deep appreciation for that moment because it represents the time where all the work that the cast and crew have done culminates in this effort to connect with an audience.”

Shanley lives and breathes theater, and has passed this love of the stage on to his family. The 48-year-old says that a performance of “Riverdance” at the Broward Center even influenced his 9-year-old daughter, Fiona, to take up Irish step dancing. “For the next two weeks, she was dancing all over the house like the ‘Riverdance’ dancers, and finally, my wife said, ‘Fiona, do you want to learn to be an Irish step dancer?’ She said yes, so we found an Irish step-dancing school right here in Fort Lauderdale. We just attended the North America National Championships, where she was ranked 16th among all the dancers in the nation in her age group.”

Shanley maintains that he wants the public to leave the theater with the same reaction his daughter had, an almost overwhelming feeling of excitement and fascination with the performance. The Coral Springs resident encourages the public to come out for the Broward Center’s 25th anniversary season, which will feature many amazing, brand-new Broadway shows, including “Newsies,” “Kinky Boots,” and “Dirty Dancing,” as well as performers such as Kristin Chenoweth and Mark Knopfler.

Shanley admits that he will see a Broadway show, enjoy the music, and then completely wear out the soundtrack. When asked if he and the crew at the Broward Center had their own “theme song,” Shanley lets out a hearty chuckle and says, “Believe it or not, we actually talked about it when we had ‘Pippin’ at the theater last year. They open with the song ‘Magic to Do,’ and that’s how we think about our role – we’re trying to create memorable moments, to create that moment of magic between the artists and the audience that can happen every night at the Broward Center.”

Patrons will now be able to enjoy the Broward Center’s shows in greater comfort thanks to a $60 million renovation project that was completed last year. The enhancements focused on creating an “ideal theater experience for audiences” by improving the facility and by providing opportunities to educate people in the community (through the addition of the Rose Miniaci Arts Education Center). Over the past few years, the center has rolled out the new Club Level, which is a premium packaged experience where theatergoers get valet parking and access to the Club Level lounge, which includes a buffet and open bar an hour before the show. It has also introduced the Intermezzo Lounge, another premium experience that includes some lighter appetizers, beer and wine, and Marty’s Bistro on the river, where guests can dine and then attend the performance.

Shanley conveys that he hopes these renovations ensure audience members have the ultimate experience at the Broward Center. “It’s part of offering chances for people to socialize and share the experience a little bit more, rather than just walking into the theater and popping into their seats,” he says.

When asked how he suggests theatergoers enjoy an ideal night at the center, Shanley says, “Given our location on the Riverwalk, there is now the free river trolley where people can go up and down the river and hit restaurants on Las Olas before a show. However a guest can imagine the perfect evening, we hope that we’ve provided a way for that to happen.”