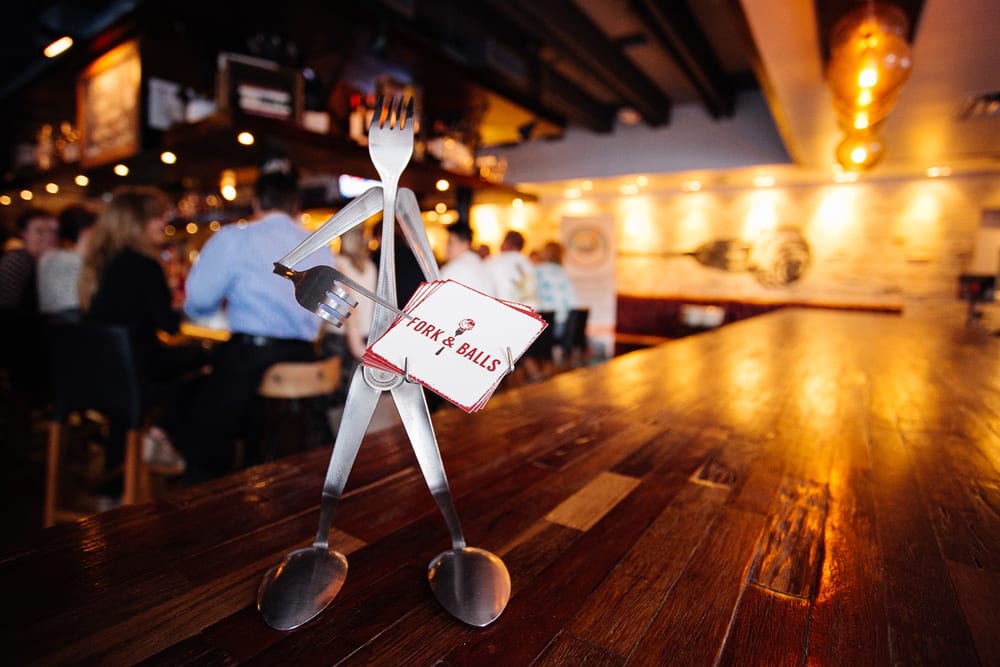 Vegan in the Round

Those who know him best understood that it was only a matter of time before Peter Boulukos, co-founder and executive chef of The Restaurant People, launched a meatball place to go with the other eateries in his portfolio, including YOLO, S3 and Tarpon Bend.

But just how many different ways could the kitchen team at Fork & Balls, which opened two years ago on Las Olas Boulevard, spin the edible orb best known for its work as a spaghetti topping? As chef Bill Bruening can attest, the possibilities continue to be endless.

“The creativity that goes into the different incarnations is the fun of working here,” says Bruening, who served as sous chef at S3 before running the kitchen at Fork & Balls. “From the chef’s standpoint, you realize that, wow, I can pretty much grind anything when it comes right down to it. The only thing you can’t grind is the cardboard box. So that really opened up some different avenues and opportunities.”

It also presented a challenge or two. Like, how would the restaurant accommodate non-carnivores who wanted in on the Fork & Balls experience? Along with a veggie ball, the F&B team has introduced a quinoa kale offering for its vegan customers—a dish remarkable for more than just its parade of rich flavors.

“When you’re a meatball restaurant, and you need a vegan option, it forces you to play with different ingredients in different ways,” says Bruening of the entrée, bathed in coconut curry sauce, that includes a host of roasted vegetables and other surprises. “People are so shocked by this dish; they rave about it all the time.

“Quinoa is great for all those salads you make at home, but it always takes on the flavor of whatever you do with it. This dish makes it nice and bright and refreshing.”

How does Bruening do it? He shares a few of his kitchen secrets on the opposite page.

1. The binding: “For both the quinoa/kale ball, and also our vegetarian ball, I needed something to bind it. If you make a ball just out of quinoa and kale, it will never stay together. I couldn’t use traditional mayonnaise, because of the eggs. So I created a tofu mayonnaise—Dijon mustard, lemon juice, soybean oil, tofu. We make it in-house and use that as the binder, along with bulgur wheat, lentils and other earthy grains. There’s also a little bit of pureed eggplant, to give it more body. It’s then flash-fried to give it a crispness.”

2. Coconut curry sauce: “There’s a little bit of sweetness with the coconut curry broth; we use Granny Smith apples to achieve that, along with a nice Pinot Grigio.”

3. Quinoa: “It took a good few weeks to get the balance of the quinoa. Too much quinoa, and the ball explodes; it doesn’t hold its form. Not enough, and it becomes more of a roasted vegetable-style ball. … We had to play with the ingredients, but we got it.”

4. The greens: “When we make the coconut curry sauce, it gets finished with a lot of herbs—lemongrass, kaffir lime leaf. So to freshen it all back up, we finish the dish with torn mint, cilantro and basil leaves.”

5. Veggies: “The dish includes roasted sweet potato, roasted eggplant and roasted red pepper, as well as roasted mushroom. If you were just eating quinoa balls in the broth, it might leave you wanting a bit more, texturally. So adding sweet potato, for example, gives it that texture. We roast that off with a little coriander and cinnamon for yet another flavor profile to go with the sweetness of the potato. We’re trying to set off fireworks in your mouth.”