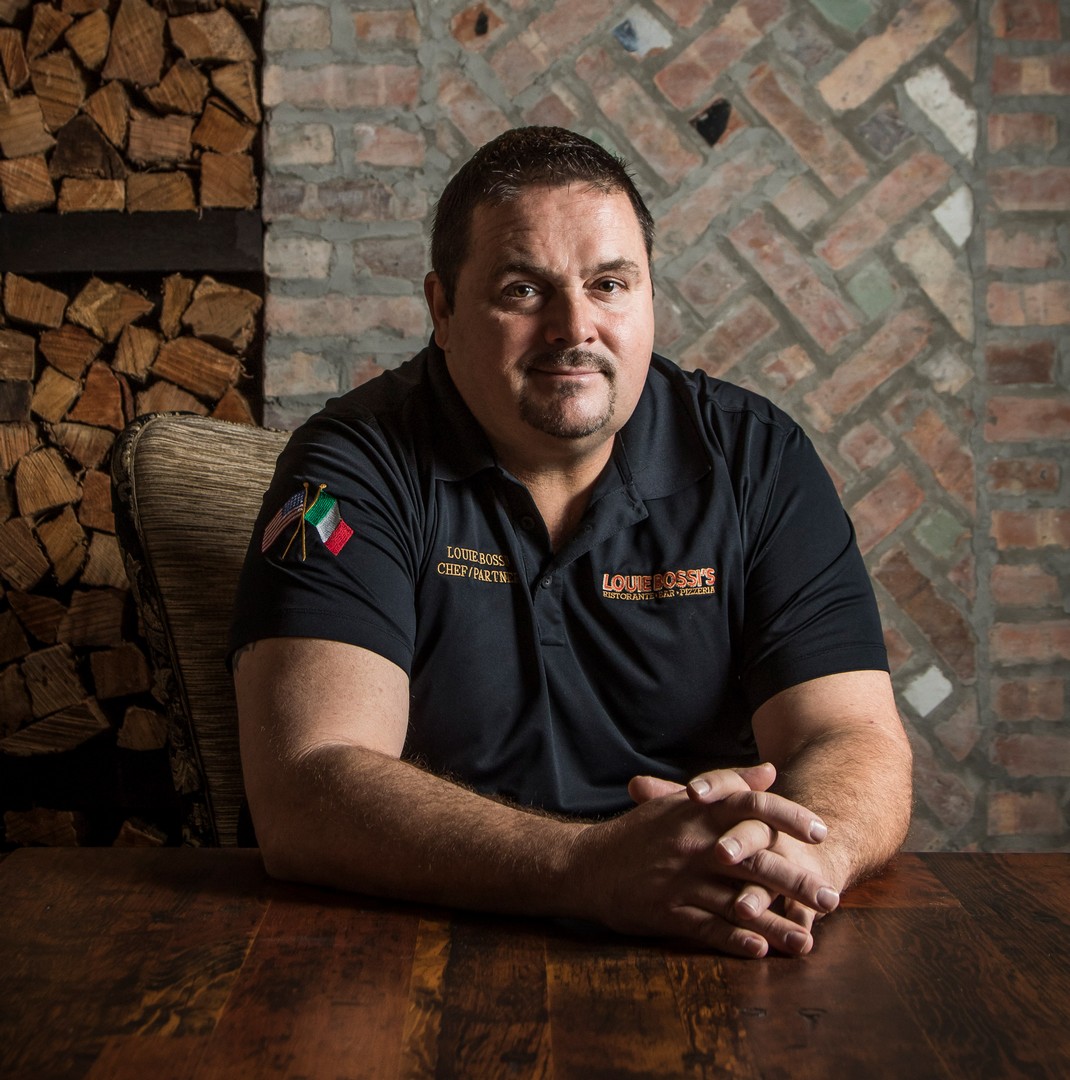 There was a time when Louie Bossi couldn’t imagine his name on the marquee of a restaurant. For him, it carried too much baggage. Abandonment. Addiction. Self-doubt. All of which makes the recent opening of Louie Bossi’s Ristorante Bar and Pizzeria in Boca Raton, his second namesake restaurant, that much more meaningful.

What it represents on Las Olas Boulevard, where Louie Bossi’s first debuted in June 2015, is authentic Italian cuisine (including pastas made in-house and wines divided by region) in a chic, 1940s setting. Getting your name on such a restaurant is like catching lightning in a bottle, he recalls an old colleague telling him. It’s even more rare when you don’t have formal chef training.

Long before Bossi had his own place, his co-workers at establishments owned by Big Time Restaurant Group (which operates Louie Bossi’s) would call him “The Natural”—mostly out of affection, but sometimes out of envy. Bossi, who worked in the kitchens at Big Time restaurants for nearly two decades, didn’t go to culinary school like the rest of the cooks; in fact, he didn’t even attend high school. Unlike his own children—two sons with wife Toni, ages 16 and 8, who are both on the honor roll—Bossi wasn’t cut out for school.

He says his father left his mother and three siblings when he was 7. A year later, he learned to cook on a gas stove in New York City to ease the burden on his mom, who worked three jobs. “It’s funny, today I wouldn’t even let my kids use the microwave [at that age],” he says. “But things were different back then; you had to survive.”

Bossi realized that he enjoyed cooking—he especially liked the look of the finished product. At lunchtime, the kids at school would throw out their lunch bags and follow Bossi home, where he whipped up steak-and-cheese sandwiches, hot dogs and the like. His mother would come home and wonder where the food went.

By the time he was 11, Bossi was in the restaurant business. The owner of a local pizzeria called on him while he was playing a video game—someone didn’t show up, and he needed help folding the pizza boxes and slicing the pies. “I was sucked in right there,” he says. “So I continued with it. I worked in all the local pizzerias.”

He started cooking in professional kitchens during his early 20s—about the same time he says he embarked on a lengthy battle with drug and alcohol addictions. Looking back, Bossi says it’s no coincidence.

“It’s one of the most stressful jobs,” he says. “High volume, demanding, long hours, liquor all over the place. Drugs run rampant in restaurants. Everything you’re not supposed to do in recovery is what restaurants do.”

In 1998, he found Crossroads Club, a nonprofit facility in Delray Beach that hosts Alcoholics Anonymous, Narcotics Anonymous and other 12-step groups, as well as a life-management training program. Bossi attended meetings, but he fell into a cycle of getting clean and relapsing.

“You go through the ups and downs—it’s like trying to find the right recipe,” he says. “I worked on a tomato sauce recipe until it was right. And then it hits—that’s what we’re looking for. Same with my life.”

The moment came almost a decade ago. He and his wife had started their family—and Bossi reconnected with his father. “It set me free from a lot of things I had growing up a kid, resenting him,” he says. “Resentment is terrible. I love this saying: ‘If I was angry at you, resentment is like me drinking poison hoping you get sick.’ ”

Bossi says using alcohol was a byproduct of fears and abandonment issues he’s had since childhood. He put down the bottle for good nine years ago and hasn’t had a drop since.

Bossi is on Crossroads’ board of directors and fundraising committee. He helped organize Taste of Recovery, a culinary benefit and festival celebrating its 35th anniversary. On June 3, from 6 to 10 p.m. at the Old School Square Pavilion in Delray Beach, local chefs will cook up savory bites and desserts next to booths with information on services for people in recovery and those looking to overcome drug and alcohol addiction.

“I want to spend my life giving back to the people who suffer from addiction,” Bossi says.

He calls himself one of the lucky ones. The timing was right. He paid his dues. He pauses in front of the Chicago-brick, Italian-imported oven at his Boca restaurant. He says he never thought he’d have his own pizza oven.

“Everything in my life is where it’s supposed to be,” he says. “There were things I went through, that I had to go through, to be where I am today—[and have] my name on the building.”