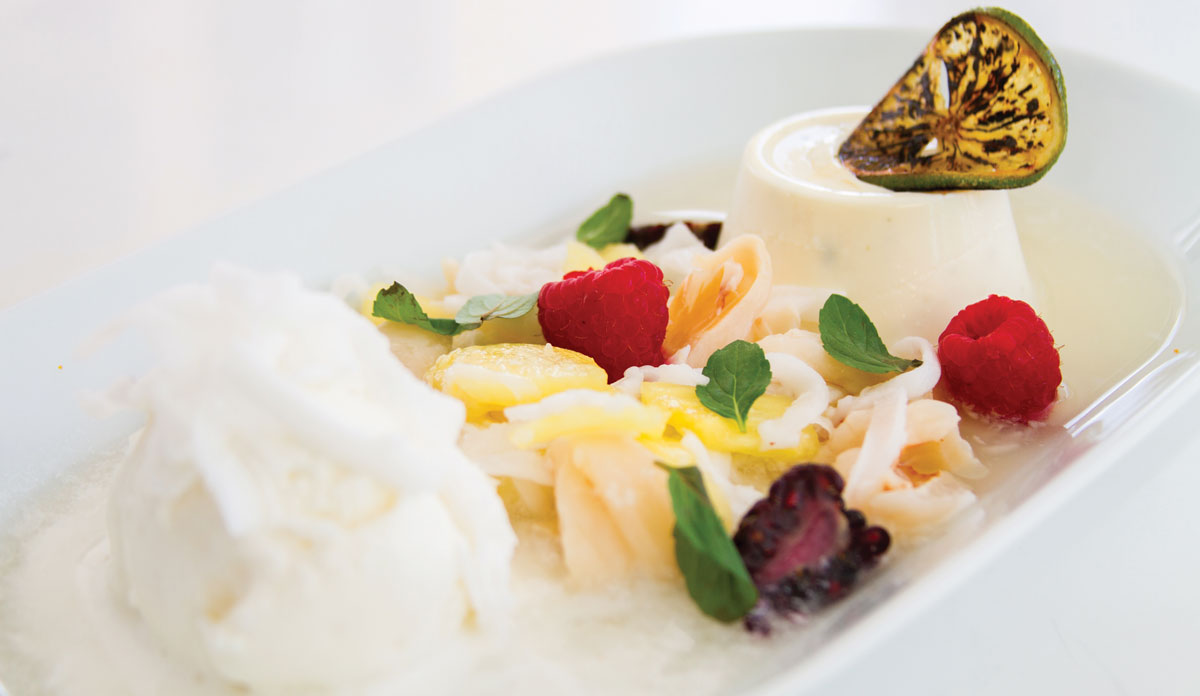 When you’ve put your culinary reputation on the line as often as Douglas Rodriguez has during his nearly three decades as a restaurateur, your career is bound to have its share of highs and lows from a business standpoint. But as anyone can attest who’s sampled the fare at one of his critically acclaimed establishments, the James Beard-award winning chef has remained remarkably consistent in at least one respect.

Look no further than his latest venture in Sunrise, Mojitobar & Plates at the Oasis at Sawgrass Mills. The man who first gained notoriety at age 24 with Yuca, the upscale Cuban restaurant in Coral Gables that debuted in 1989, describes his second Mojitobar location (the original is at Bayside in Miami) as “a party with good food.”

The “party” speaks to live disc jockeys playing Latin hits; 32-ounce mega mojitos, in flavors like passion fruit and coconut, served in illuminated LED towers; and closing times (2 a.m. from Sunday to Thursday and 4 a.m. on Friday and Saturday) that allow customers to dance the night away.

The “good food,” meanwhile, is an understatement when it comes to Rodriguez, who crafted an entirely new menu for the Sawgrass Mojitobar. His collection of ceviches, flatbreads, small plates, salads and bar snacks is a testament to kitchen prowess that, in the late 1990s, led Newsweek to name him one of the 100 Americans who will influence the coming millennium.

It also speaks to his roots. The son of Cuban immigrants has made frequent visits in recent years to the country 90 miles south of Key West. Rodriguez uses each journey to Cuba as a culinary learning experience; the flavors and techniques are present in dishes such as mixto leche de tigre ceviche (shrimp and calamari with fresh passion fruit, ginger and basil) and Cuban fried chicken with a sour orange mojo glaze.

“The people in Cuba don’t have a lot to work with; it’s sad to see how the people struggle over there every day,” says Rodriguez, who turned 51 in July. “What I’ve learned most through my travels to Cuba is ‘less is more’ and ‘work with what you have.’ ”

Rodriguez’s parents left Cuba in 1958, settling in New York. Growing up, he was immersed in the sights, smells and tastes of Cuban cooking—so it came as little surprise to his parents that their son bypassed cartoons on TV and instead tuned in to the cooking shows hosted by Julia Child. “I fell in love with her personality,” he says of Child, who Rodriguez credits as one of his early mentors.

When Rodriguez was 13, the family moved to Miami, where he broke into the industry as a dishwasher at a restaurant on Lincoln Road. “I used to walk by the restaurant all the time, one day I went around the back and told them how I really wanted to eat there but couldn’t afford it,” Rodriguez says. “I told the chef I would wash the dishes, if I could eat there, just to taste some of the food on the menu.”

Rodriguez knew that he would spend the rest of his life working with food, and went on to perfect his culinary skills at Johnson & Wales University in Providence, Rhode Island. After graduation, his career took off. He opened restaurants to glowing reviews in Miami, New York City (Patria) and Philadelphia (Alma de Cuba). He earned James Beard Foundation honors as the Rising Star Chef of the Year in 1996; more than a decade later, the Beard Foundation would nominate him for Best Chef South Florida in consecutive years (2008 and 2009).

As much as the accomplishments are sources of pride, Rodriguez lights up most when talking about his trips to Cuba and the admiration he has for the talented, hardworking chefs who rely on imagination and technique to create delicious dishes with only a fraction of the ingredients that a top chef in the tri-county area has at his or her disposal.

“It’s like a true artist,” he says. “If you only give them four or five colors, a [master painter] can come up with a work of art.”

Compared to some of his previous works, dishes such as roasted corn, crispy shrimp chicharrones, bacon-wrapped dates, and a Cuban sandwich on a stick have Rodriguez working on a smaller canvas at his latest restaurant. But less most definitely is more at Mojitobar.