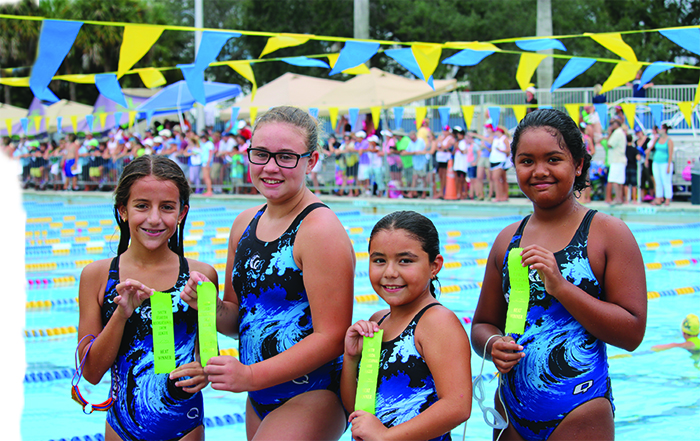 One of the best-kept secrets in Coconut Creek is hidden just below the surface of the township’s clubhouse pool. The swimmers from the Tsunami Swim Team have quickly turned a ripple into a swelling wave, capturing medals along the way.

How does a single team accomplish this when competing against 15 other South Florida teams?

“I think we teach the kids good habits from the beginning,” says Coach Ashley Wilson, who is on the board of the South Florida Recreational Swim League and also coaches the Coconut Creek High School swim team.

The swim school started back in 1997 and had its first competitive team, The Tsunami Swim Team,  by 1998. “We only had a dozen swimmers back then,” says Coach Shane Davies, who has been with the program and the team since its inception. “After this summer session, we have over 100 swimmers participating with us.”

The Tsunamis are part of the much larger community of the South Florida Recreational Swim League, which includes teams from as far south as Dade County to as far north as the YMCA Treasure Coast with swimmers from Martin, St. Lucie, Indian River and Okeechobee counties. There are well over 1,000 swimmers from ages 4 to 18 that participate in competitions all over the region.

What sets the Tsunamis apart is dedication. “Our team trains year-round and competes in all three seasons (fall, spring and summer),” says Davies. “A lot of the teams compete only during the summer, but I see that mindset changing more and more each year.”

“We also teach our kids to not compete,” says Wilson, as she watches the swimmers cut through the water with each stroke. “We teach them to watch the clock and not the person in the lane next to them. It’s not about doing better than the people you swim against, but doing better than you did yesterday.”

It seems to be working; even as the coaches run the kids through more kicking and time drills, they don’t gripe or talk back. And when they finish their laps, I can overhear them discuss their individual times and asking both coaches about how their strokes and kicks were.

“Swimming is fun. And honestly, I’m not coordinated on land,” shares Julia, age 17, who has been with the swim team for 9 years.

“I love the competitiveness of swimming,” say Maddie, age 14, who is in her fifth year with the team.

“The kids want to be here,” Davies says. “A lot of them swim more than just the two times a week we meet for practice. And you can see it in their attitude, from them assessing themselves to how they react when we give them more drills.”

“It’s also that they think I’m a little bit crazy and they don’t want to hear me giving them even more laps!” Wilson adds.

This dedication extends to the parents of the Tsunamis; the entire league is run by volunteers – from members on the board, to the judges and timers, to the concessions sold at each event.

“It’s amazing seeing how all the parents are so organized and work together,” says Fadia Sylvester, a parent and the team’s unofficial public relations person. “As new parents join, you’ll see the parents who will be leaving the next year teaching the new ones what to do to take over.”

The relationship the swimmers have goes much further than just teammates in the water; they are friends and mentors as well.

“A lot of my swimmers seem to feel comfortable with me and will sometimes share things with me first before they go to their parents,” says Wilson.

What all swimmers learn, whether they are on the team or just learning to swim at the school, is self-discipline, sportsmanship and inner strength.

For more information on the Tsunami Swim Team, visit facebook.com/TsunamiSwimTeam.