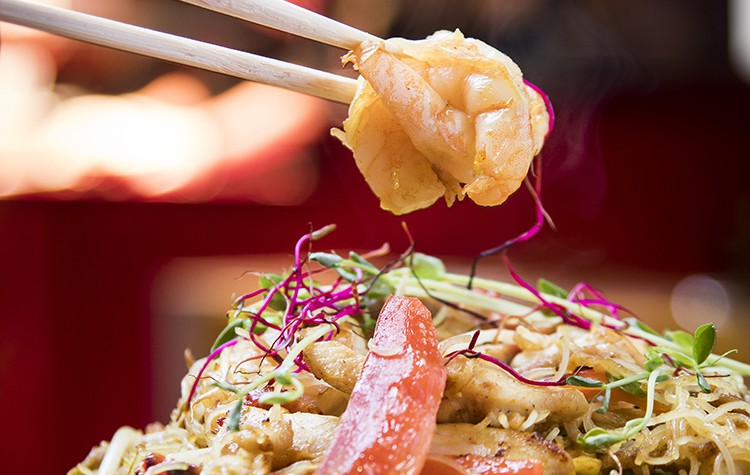 Eric Douglas has something in common with Seminole Casino Coconut Creek’s newest restaurant, The Bol. The restaurant is a mixture of two cultures, serving both Vietnamese and Chinese fare. While the operating manager speaks about how he came to work for the Seminole tribe, he notes that he’s half Vietnamese and half Shinnecock (a tribe based in New York).

When he says things work out, he’s referring not only to his career but to The Bol’s journey. Douglas and his business partner, Ross Mamunur, guided the original Bol from idea to opening at the Seminole Hard Rock Hotel and Casino in Hollywood in May 2013. Three years later, they decided to take the concept to another Seminole property that needed an Asian restaurant. Their expansion dreams finally were realized in May 2017 at Coconut Creek’s version of The Bol, retrofitted into a former valet waiting area that is bigger than the Hollywood location.

Douglas and Mamunur took advantage of the bigger space in the Creek casino to purchase their “dream equipment” for an open kitchen (with a long counter right up front) and a bar. He’s especially proud of the cooks, who he calls “culinary artists.”

“This is the food that was cooked for them as they were growing up,” Douglas says. “These guys grew up around a wok, so it’s amazing what they can do. That wok is almost an extension of their arms.”

Dishes include Vietnamese rice bowls and pho (a meaty noodle soup), wok dishes and specialty dishes such as Cantonese-style lobster and Peking duck. The cocktails also are Asian-inspired and include concoctions such as the Shanghai Mule—Douglas’ favorite—with lychee vodka, ginger beer and lime juice, and the Fire’ita with tequila, sriracha, crushed red pepper and orange liqueur.

Decorated in red, The Bol is prominent on the casino floor. Its largest table is arguably its most important. Inspired by the Chinese tradition of eating in community, The Bol features an 18-seat table to promote guest interaction.

“We think the relationship between each other is equally important [as the interaction with the food],” Douglas says. “Having the community table where you can sit next to a perfect stranger gives you the opportunity to enjoy the experience that much more.”

Douglas believes the idea complements Coconut Creek, which he says is unique compared to other Broward cities. In preview dinners with local VIP patrons, Douglas was excited to hear locals compliment the food.

“I was excited to bring [The Bol] to the casino, but after getting that feedback from the local community,” Douglas says, “I got even more excited about what I could offer in terms of cuisine—not just to the casino, [but to] the community.”