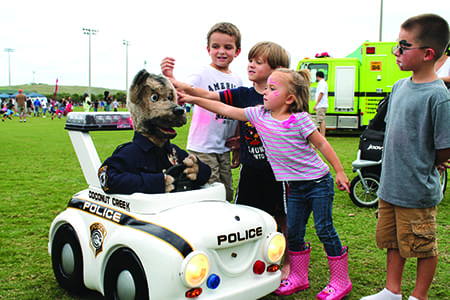 That Down Home Feel

For at least an afternoon, it felt like a slice of mid-America had plopped down in Coconut Creek with the First Annual Fall Harvest Festival.

There were falling leaves, a pumpkin patch, flag football, an arts and crafts tent, food trucks, bounce houses and a compelling simulation of an extraction of an accident victim.

The free event on Nov. 16 went off smoothly despite rain that fell just before it opened.

“They did a fantastic job setting up and putting it together,” said Mayor Becky Tooley. She commended the enthusiasm of all the departments in the city for pulling together to make the event happen with just six months of planning.

Here were seven highlights during my visit:

·      The Sauced Up Truck: There were plenty of food trucks, but I choose the Sauced Up Truck’s meatballs stuffed with cheese, topped by a dollop of pesto sauce and tucked into soft ciabatta bread. This was a dish that would have drawn raves at a gourmet restaurant and it beat the Coney Island dogs I used to get back at fairs in Illinois. ·      The 16th Annual Turkey Bowl flag football tournament: After years of watching football on TV, it was great fun to be right next to the sidelines watching players chase each other around. ·      Officer Bark: The police department’s fuzzy mascot steered a toy car and talked to children. Sgt. Henry Cabrera was hidden off to the side with the remote during my visit. What a great way for the department to build rapport with young residents, I thought. ·      Artist Sheryl Hughes: Hughes took palm fronds, rubberized them and painted classic scenes of Florida outdoors. Her eco-friendly touches also included using sea grape leaves. ·      The Jamie Mitchell Band: It was nice to see guys my age rocking out with an array of country and rock tunes. They were catchy enough to get the kids up and dancing. ·      Mock Extraction: Margate-Coconut Creek Fire Rescue gave a demonstration of cutting the roof of a car to free an accident victim. It was interesting to see the tools they used, including the hydraulic Jaws of Life that chewed right through the corner beams.