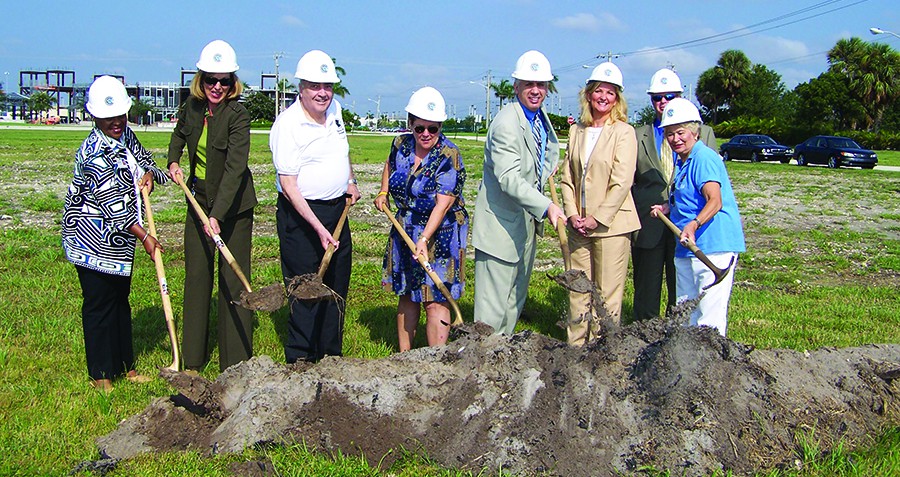 When Jim Waldman was dropping off his daughter for her first day of school at Winston Park Elementary in 1992, he noticed that the school was overcrowded with portables. Then naïve about politics, the attorney saw it as a sign that Coconut Creek city commissioners were not doing their jobs.

It was the impetus for him to run for office, which led to receiving an education of his own.

“It wasn’t until I got into the campaigning that I found out the city commission had nothing to do with the schools and overcrowding,” he says.

Waldman won a seat on the commission in 1993 by 43 votes, launching his career as a public figure in both Coconut Creek and, later, the state. He moved to Creek with his wife and daughter in October 1988, commuting to Boca Raton to practice law. For Creek, it was a time of growth. The population jumped from 6,288 in 1980 to 27,485 in 1990.

“There was new development. You had Wynmoor and the Township, but you could see more young people were coming,” he says. “Back then, I was 30 years old, planning a family. It was a great family community, and we were excited about the fact that there would be a lot of other young families that we would meet and grow up with.”

Waldman got to know his Wynmoor neighbors personally while running for the commission.

“When I first won by 43 votes, I beat the incumbent. It was because of Wynmoor. I lived in the northern part of the city, but I used to be out in Wynmoor virtually every night of the year. Friday night was their movie night. I would be out there with my kids, my wife and friends, and I would say hello to everybody at their theater. Everybody thought I was a grandson, because I was much younger. Now I could be a resident there,” he says with a laugh. “If you didn’t win Wynmoor, you didn’t win an election back then.”

During that time, the city also saw more community growth. The Community Center and the Recreation Complex opened, which Waldman says brought younger families and expanded the parks and recreation division.

One of the biggest developments was Seminole Casino Coconut Creek. In a land swap with the state, the Seminole tribe obtained land in Coconut Creek after giving up land to make way for the expansion of Stirling Road. The tribe approached the city about opening a casino. Though they were rebuffed several times, as the city believed it wouldn’t be compensated fairly for the casino’s impact, the tribe kept asking and negotiations followed. Waldman recalls sitting in workshop meetings “going back and forth across the table” with different offers.

“We ultimately were able to reach an agreement with them where the tribe would pay $1 million to the city with increases going up annually. And then in the event they got Class 3 gaming [slot machines], that would double to $2 million annually,” Waldman says.

The money was designated for capital improvements and helped the city acquire the land for the construction of the Community Center. The casino opened in 2000, which Waldman says led to more development in Creek.

“All of the negative impacts never came to fruition,” Waldman says. “Coconut Creek was fortunate to have the Seminoles open up in the city.”

After 10 years on the commission (1993-94 and 1999-2006), Waldman tried for the state legislature—although he needed some persuasion, having made an unsuccessful run in 1994. Ron Greenstein, a former Coconut Creek commissioner who reached his term limit in the Florida House of Representatives, told Waldman he had to run to fill his seat. For months, Greenstein worked on him. With his son finishing his junior year at North Broward Prep and his daughter off to college, Waldman decided it was the right time. He was elected in 2006 and represented District 95, which included parts of Coconut Creek. After redistricting in 2012, he represented District 96, which included Coconut Creek, Parkland and portions of Coral Springs.

Though Waldman represented more than Creek, he always kept its interests in mind. He fought to get money back to the city to help infrastructure for roads, sewers, water and parks. When the state negotiated agreements with the Seminoles, he inserted conditions that the communities where the tribe had casinos would receive some of the revenue that went to the state. What he’s most proud of is his bill to increase the cigarette tax to a dollar a pack (passed in 2009).

Throughout his years as a representative until 2014, he also kept in touch with Creek residents, who called and even visited Tallahassee.

“I think people were happy with the representation I gave them,” Waldman says. “I always got good responses whenever I went to community events, especially in Wynmoor.”

Waldman is now general counsel for Keiser University. Though he now lives by the beach, he keeps in touch with former neighbors who became friends.

“I think you have a local government that’s responsive to the residents and the city has been built on what the residents want,” he says. “It’s such a great feeling to be in that city.”

“Everything is all based upon population growth,” he says. “The apartment complexes that have grown around that area brought more people in. When you bring more people in, you need more retail, you need more commercial. You need light industrial. I think when you have that critical mass of people, you’ll see developers come in and ultimately be prepared to really spend the money and build it.”