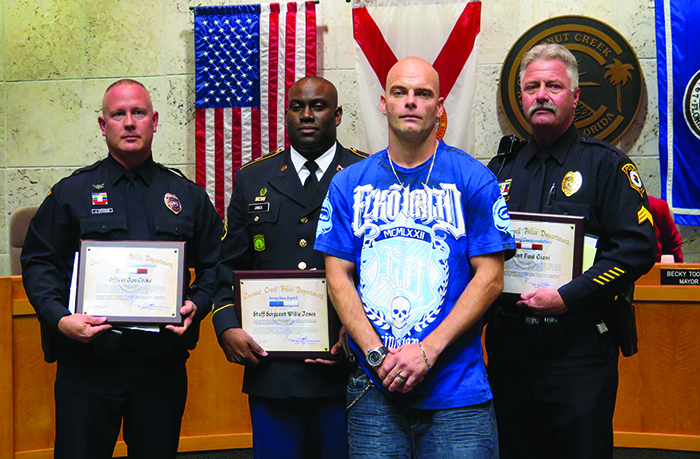 Robert Henion’s doctor said he shouldn’t go to the Coconut Creek City Commission when he left the hospital earlier in the day, but Henion said he wouldn’t have missed it for the world.

On Aug. 1, Henion was riding on his scooter when he was involved in a traffic accident. He was in critical condition with a severed femoral artery and a nearly amputated left leg, along with multiple head and face injuries.

U.S. Army SSG. Willie Jones played the ultimate Good Samaritan when he happened upon the accident and stopped to render assistance. Police Sgt. Paul Giani and Officer Tim Cooke were responding to the accident call. Officer Cooke used the sleeve of a shirt to make a tourniquet while SSG. Jones used his t-shirt to apply direct pressure to the wound. Sgt. Giani also grabbed a trauma kit and used QuikClot to stop the bleeding. QuikClot is a gauze-like material that is filled with the mineral Kaolin that stops bleeding.

A second tourniquet was made out of a shoestring.

Thanks to these ingenious heroes, Henion, using a cane to assist in movement, was on hand on Jan. 23 to recognize all of the men who saved his life. “I should be dead,” he said. “There is no way I should even have my leg.”

A Lifesaving Commendation Award was issued by Police Chief Michael J. Mann to all three men. “If not for your expedient, life-saving actions and teamwork, this victim may have bled to death on the scene,” the commendation says.

The incident showed the value of the new trauma kits that the department placed in patrol cars a year ago.

Mayor Becky Tooley, who got up with the entire commission to recognize the police officers and Jones, said Henion was fortunate to be saved by three angels. Attendees at the meeting gave them a standing ovation.