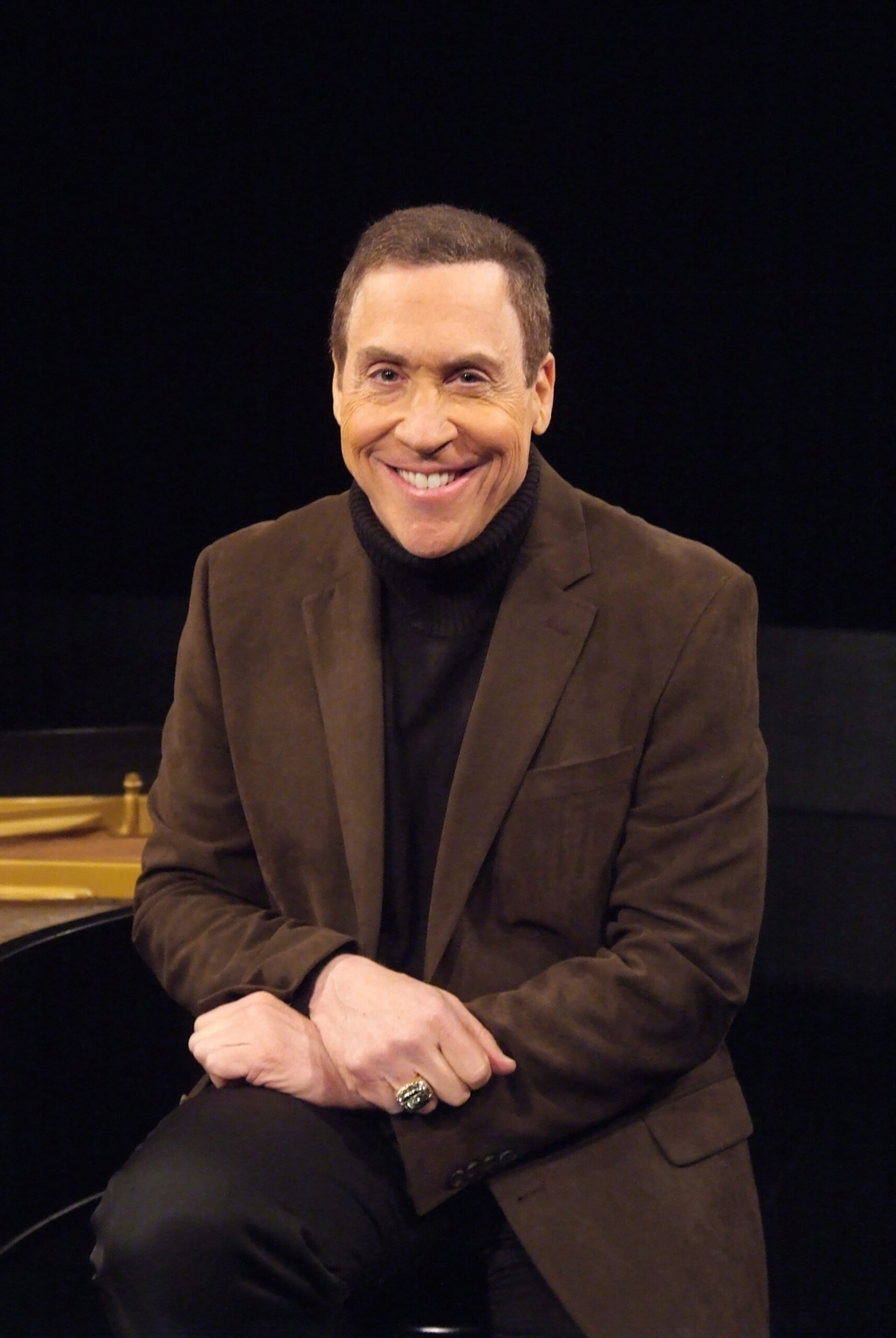 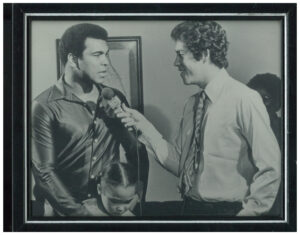 It was raining hard the day that a future Los Angeles Lakers legend named Kobe Bryant arrived at ESPN studios in 1996 for his first sit-down with the sports network’s renowned interviewer, Roy Firestone. Suddenly, lightning hit the building and blew out the studio lights. Firestone explained that the repairs would take a few hours, and that Bryant could leave and come back if he wanted.

Bryant not only stayed, but he impressed everyone in the room with his wise-beyond-his-years maturity. He shared his life goals, he talked about growing up in Italy, he asked the technicians about how the equipment worked. “He was like a sponge,” Firestone says.

In recalling that afternoon, Firestone does what he does best—he makes it all about the person sitting across from him. But it’s just as likely that the late Bryant, only 18 at the time, stayed in part because of the Miami Beach native who would be asking him the questions.

For the better part of 15 years (1980-94), Firestone, a seven-time Emmy Award-winning broadcaster, elevated the long-form interview, drawing opinions, insights, and surprising admissions out of sports figures and celebrities during his run on ESPN’s SportsLook (later, Up Close). For more than 30 years, he’s also performed a one-man show at venues all over the country, complete with stories about his career, songs and impersonations.

“I’ve probably interviewed 5,000 sports figures and celebrities, including Paul McCartney, Elton John and Bruce Springsteen,” says the resident of Encino, California, who has a new interview show on ESPN/ABC, involving the greatest athletes of all time in different sports, set to debut in 2022. “I’ve appeared and performed in Vegas. And my childhood heroes have become friends. Who gets this life?”

Firestone, who will appear in Miami at an author event on Jan. 6 as part of the Berrin Family Jewish Book Festival, shared a few episodes from that charmed life with Lifestyle.

Your broadcasting career started in the 1970s at WTVJ in Miami. Everyone who covered Miami sports during that era has a story about the late Don Shula, the Dolphins’ longtime coach. What’s yours?

As a kid growing up in Miami [he graduated from Miami Beach High School and the University of Miami], I was the biggest Dolphins fan. Years later, I got to know Don. But as an aspiring reporter, I had some run-ins with him.

In December 1974, the Dolphins lost a heartbreaking playoff game to the Oakland Raiders that ended their quest for a [third straight Super Bowl win]. Bernie Rosen, the legendary sports producer at WTVJ, sent me to the old Miami Airport to interview Shula after the team plane landed. At this point, I wasn’t yet on the air, but he still gave me this big interview. So, I’m pacing back and forth, practicing my questions—and the plane is delayed. Until 4 a.m. I waited six hours in the gate area.

Finally, the plane arrives. The Dolphins famously lost that game on a miracle touchdown [in the final 30 seconds]—and Shula is still furious. He’s the first one off the plane. I turn the camera on and run up to him. He goes, “What the [expletive] do you want?” I’m 21 at the time, and I’m terrified. The camera is rolling, and I go, “Nothing, Coach. Nothing at all.”

The next morning I have to tell Bernie Rosen that I didn’t get the interview. It was harder to sit through his reaction than Shula’s. He never let up. He goes, “Your only job was to get that interview. Who cares what he says to you! Ask the questions!” I think he told me I wouldn’t amount to anything.

Forty years later, I told Shula that story. And he remembered it. I asked him if he felt bad. He goes, “Hell, no. I wanted to go home. I didn’t want to talk to some kid.”

Your 2019 book That’s What I’m Talking About opens with a story about your time as batboy for the Baltimore Orioles during spring training. How did that experience impact your career path?

When I was 15, I read an article that the Orioles’ equipment truck was on its way to Miami for spring training. For me, it was like the circus was coming to town. I talked my mother into driving me to the old Miami Stadium [spring training home to the Orioles for three decades; it was demolished in 2001]. And I waited three hours for this truck. Sure enough, it pulls up. I introduced myself and told the guys I wanted to help them unload the truck and be a batboy. They told me to get lost.

Somehow, I eventually won them over. And for three years, during spring training, I was a batboy and clubhouse [assistant] for the great Orioles teams of that era [the late 1960s/early 1970s]. That was the introduction for me into being a sports broadcaster. I wanted to be around those athletes again after that experience.

About eight minutes into my first day, Brooks Robinson [Baltimore’s future Hall of Fame third baseman] comes into the clubhouse. And he asks me to play pepper [a fielding warmup in baseball]. He was so kind and accessible and humble.

Later, I was doing a project for school, and I asked to interview him. He said, “Sure, partner.” He always called me that. When I went home to listen to the tape, it didn’t record. I went back to him the next day, shaking at this point, and told him it didn’t record. And he goes, “Let’s do it again!”

You can barely get an athlete to give you an interview the first time these days, let alone a second time. That started a lifelong friendship with Brooks.

When Frank Robinson died in 2019 [another Hall of Famer, who played alongside Brooks on Baltimore’s World Series championship teams in 1966 and ’70], Brooks ended up staying at my house with his son and with [Orioles pitching great] Jim Palmer. It was like a slumber party with these Orioles legends. Just surreal.

Why has the long-form interview always been such a good fit for you?

I love interviewing because I love people. I love learning about their lives. And, honestly, I learn something new in every interview. I’ll give you a few examples.

When I recently interviewed Emmitt Smith [for the new ESPN show], he asked me if I knew what the number 18,355 means. I said, “Yes, that’s your rushing yardage total. You’re the all-time leading rusher in the NFL.” Emmitt says, “You know what else? Add up those digits individually, and see what you get.”

They add up to 22, which was his number [in college and in the NFL]. “There’s more to that,” he said. “I was drafted with the 22nd pick by the Cowboys [in 1990]. And my son is now at Stanford, and he wears No. 22. I didn’t pick that number, that number picked me.” It was an interesting conversation.

When I interviewed Carl Lewis [the great Olympic track star], he talked about being born in Birmingham, Alabama in the middle of the Civil Rights Movement. His father was prominent in the movement. It turns out that Carl was baptized by Martin Luther King Jr. And his family was friends with Rosa Parks’ family.

Suddenly, we’re having an entirely different conversation about things I never knew about.

The 41st Berrin Family Jewish Book Festival at the Alper Jewish Community Center (11155 SW 112th Ave., Miami) started in October, but the series of in-person and virtual author appearances shows no signs of slowing down, with events scheduled through late April.

Roy Firestone kicks off the 2022 schedule (Thursday, Jan. 6; 7:30 p.m.) with an in-person performance that promises to include anecdotes from his Emmy-winning career as a host and interviewer on ESPN; stories about his 2019 book That’s What I’m Talking About, as well as his children’s book (Kobe and a Boy Named Roy, which he wrote following the death of Kobe Bryant and Kobe’s daughter in a helicopter crash in January 2020); and elements from his one-man show.