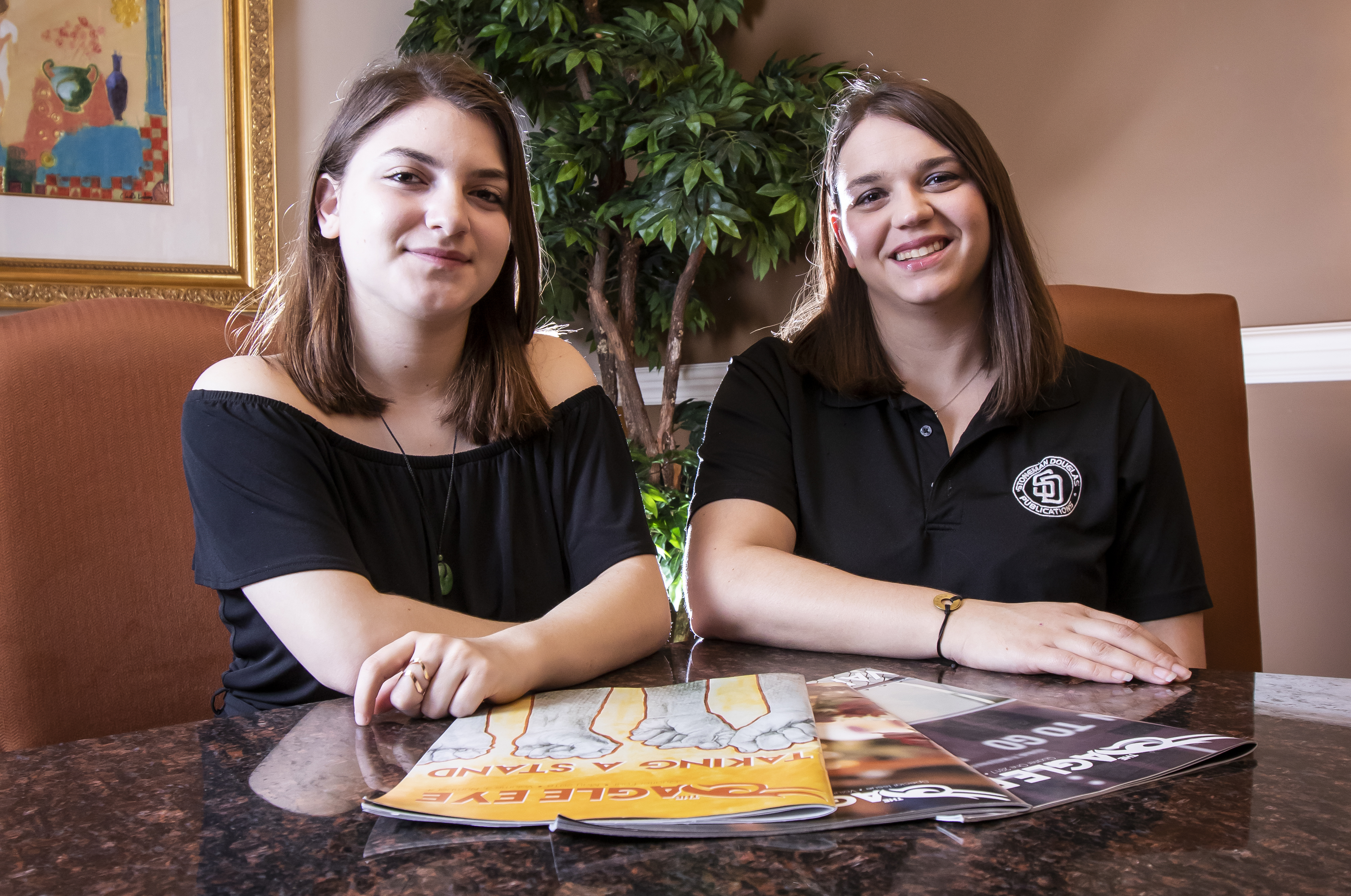 MSD student journalists on the power of the press

The student journalists at MSD, following the lead of their impassioned faculty adviser, tell the stories that need to be told

Pictured above, from left: Rebecca Schneid and Melissa Falkowski

They hid from the gunfire. They ran through the halls and, in some cases, past their slain classmates. They attended funerals and prayed for their friends still recovering in the hospital. They spoke to members of the print media and did television interviews. They tried to make sense of the life-altering incident that had claimed 17 lives.

And then, following the shooting last Feb. 14, the student journalists at Marjory Stoneman Douglas High School did what they had been trained to do.

“The next morning, when we knew there was going to be a vigil, I texted the class, ‘Who could cover the vigil? Who was ready?’ ” says journalism faculty adviser Melissa Falkowski, now in her 15th year at MSD. “This was such a defining moment for the school. If we didn’t cover it, we would regret it.”

Rebecca Schneid, 17, now a senior and co-editor-in-chief of the Eagle Eye student newspaper with Hannah Kapoor, was one of the students who needed to write. That day, Schneid hid inside a closet in Falkowski’s classroom with nearly 20 other students. That night, she texted her teacher.

“Thank you for keeping me safe. We’re going to use the newspaper to remember the people we lost.”

In the immediate aftermath, teachers were not allowed to teach. They were told to focus on the students’ emotional health. They allowed them to color and play games. However, Falkowski saw the value in giving her journalism students a more familiar outlet—writing and photography. 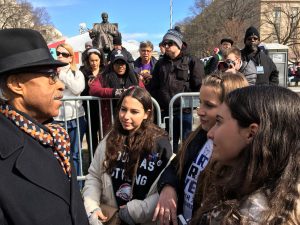 MSD student journalists at March For Our Lives
in Washington, D.C.

Schneid recalls meeting within a week of the shooting, at the Barnes & Noble in Coral Springs, to plan a memorial issue that would come out in March. The Washington Post filmed their conversations and their subsequent reporting for a 20-minute documentary. “We were basically writing obits,” Schneid says.

They covered the March 24 March For Our Lives rally in Washington, D.C. The U.S. edition of the British newspaper The Guardian asked them to guest-edit its paper, a project resulting in a global student press award, which Falkowski and student Dara Rosen received on behalf of the team at a ceremony in Edinburgh, Scotland. In December, CNN invited seven people, including Falkowski and fellow MSD teachers Ashley Kurth and Shanthi Viswanathan, to appear on stage during the “CNN Heroes” broadcast; they were applauded for their bravery during mass shootings.

“I absolutely do not see myself as a hero,” Falkowski says. “It was incredibly humbling to be in a room full of so many amazing and deserving individuals who truly embody service to others and are making a difference in their communities. I accept certain opportunities, like ‘CNN Heroes,’ because it keeps the conversation about gun violence going. I feel like it is my responsibility to, as much as possible, keep talking about gun violence for as long as people are willing to listen.”

That’s not the only activism being pursued by Falkowski and her students. The journalism department also is pushing for more First Amendment protections, namely the right for students to express themselves without censorship by school administrators.

Thirty-six states, including Florida, give school administrators the authority to censor school publications. Teachers and principals around the country have been fired for allowing the publication of stories their superiors don’t like. While Falkowski has been a staunch advocate of student press rights for several years, the shooting at MSD made it a cause célèbre for her team. The first anniversary of the shootings coincides with the Year of the Student Journalist, a nationwide initiative under the auspices of the Student Press Law Center.

For generations, young Americans have shared Schneid’s demands to be heard. Yet the Supreme Court has heard only three cases related to free speech in schools since the country’s founding. The first case was in 1943, when the court decided schools could not force students to say the Pledge of Allegiance. The second time was during the Vietnam War.

For her part, Falkowski draws inspiration from First Amendment activist Mary Beth Tinker. As a 13-year-old in December 1965, Tinker and a group of Iowa students decided to wear black armbands in protest of the war. Arriving one morning at school, they were asked to remove them. Refusing, they were sent home and told not to wear them when they returned after holiday break. They wore black clothing for the rest of the school year.

A four-year court battle culminated in the Supreme Court decision, Tinker vs. Des Moines. On Feb. 24, 1969, the court ruled 7-2 that students do not “shed their constitutional rights to freedom of speech or expression at the schoolhouse gate.”

For the next 20 years, students were largely free from censorship, able to choose the plays they wanted to perform, express views critical of school policies in student newspapers, and address political and social themes in their artwork.

But another court case, decided in 1988, restricted those freedoms, returning ultimate editorial control to school administrators. The decision, which Mike Hiestand, senior legal counsel for the Student Press Law Center (SPLC), calls “poorly written, inappropriate and biased,” says student content can be censored if it is deemed “inconsistent with shared values of civilized social order.”

Broward County Public Schools declined two requests to be interviewed about MSD’s journalism program in light of these restrictions. Instead, its public relations team sent the county’s Code Book for Student Conduct stating no printed or digital media “may be distributed in the schools or on school grounds unless the principal or his/her designee has granted permission.” The code goes on to say that content must be consistent “with the educational curriculum of the School Board” and reflect “reasonable school community standards and cultural values.”

But what are those values, and what do students hold dear?

Today, at the state and local level, First Amendment protections continue to lack uniformity, says Falkowski, who believes school publications should not be a PR vehicle. “Just because [administrators] don’t like it is not the reason to pull something.”

She thanks Ty Thompson, the principal at MSD, for letting her team make editorial decisions on the shooting and beyond. In addition to illustrations of the most-purchased guns and graphic images of violence, they have written about students abusing Adderall to deal with overwhelming academic pressure, the November student walkout over administrator reassignments, the LGBTQ community, and whether school limits creativity.

Falkowski knows of other teachers and students in Broward who have been silenced but says their peers in Miami-Dade County have full “student journalism rights.”

“We’re happy to have a principal very much on the side of students expressing themselves,” she says. “Obviously, we’ve had controversial issues in the past. We’ve been able to keep an open dialogue with him.”

To ensure full protection of all students, Falkowski and Schneid support New Voices, a nationwide, student-powered movement to make schools more welcoming of student opinion. As of fall 2018, 14 states have passed New Voices laws, and the District of Columbia and Pennsylvania have codes protecting student rights.

“There’s really very little activity going on in Florida,” says attorney Frank LoMonte, former SPLC executive director who is now director of the University of Florida’s Brechner Center for Freedom of Information. Having testified in nine states on behalf of New Voices, LoMonte can no longer lobby as a government employee. But, he still writes editorials supporting press freedoms.

“You have to have a critical mass of people on the ground who want the legislation to happen,” LoMonte says. A few years back, a group of journalists in Southeast Florida were backing New Voices, but without the support of groups elsewhere in the state, the flame died. “I still have that hope, but it’s going to take more states coming aboard so advocates can come to Florida,” LoMonte adds.

“Let’s not be embarrassed by being last.”

Falkowski will play a leadership role in the yearlong campaign to standardize student rights, including a trip to Iowa, where she and other activists will celebrate the 50th anniversary of the Tinker case. The mother of two (ages 7 and 20 months) also plans to participate in events run by SPLC and Issuu, the digital, self-publishing platform the school uses to post its quarterly publication.

As the first anniversary of the shooting approaches, the journalism students remain on their Eagle Eye mission. They will report on the Feb. 14 “day of service,” including different volunteer activities organized by student groups and the cities of Parkland and Coral Springs.

Schneid says volunteering is not mandatory.