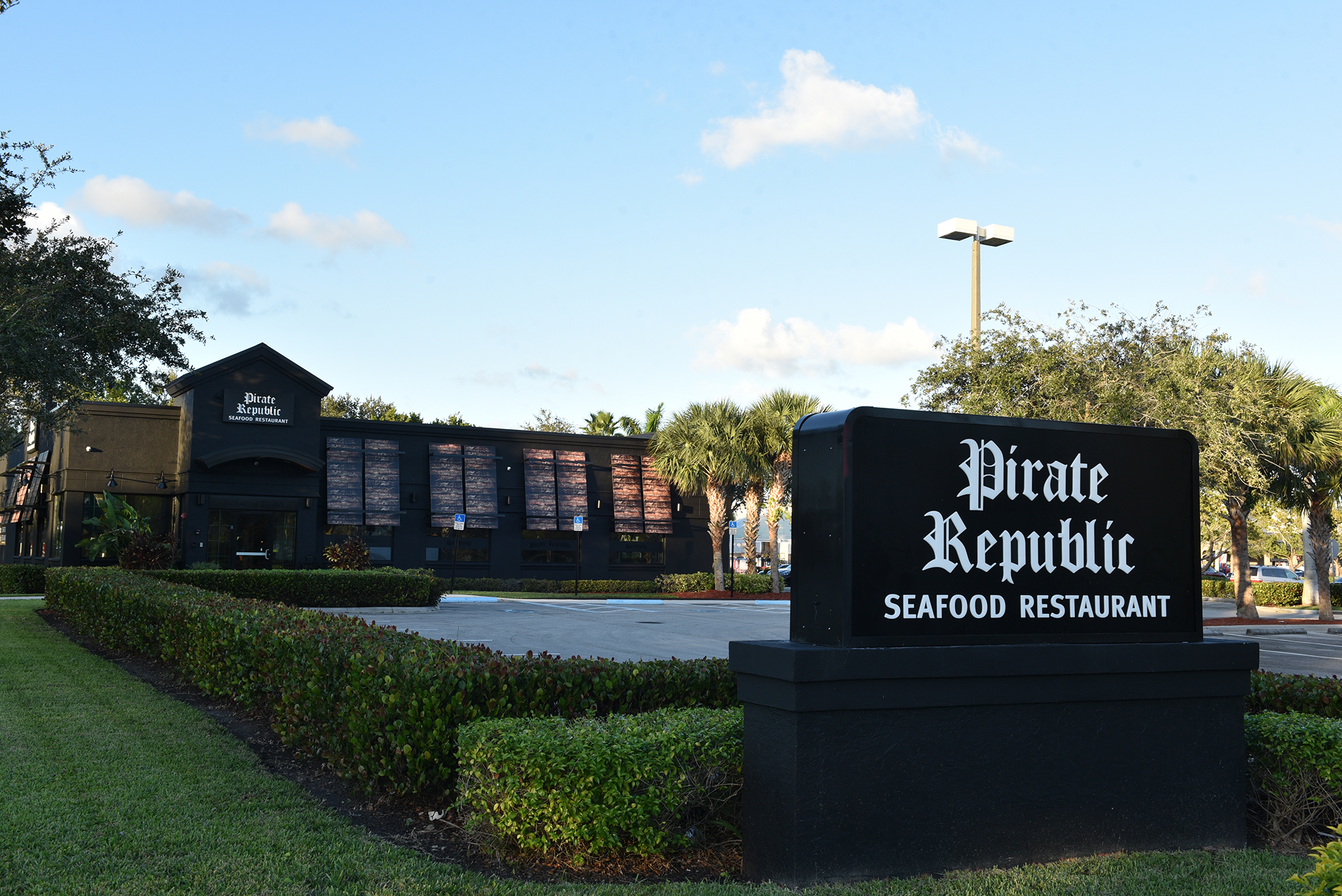 At most restaurants, diners expect to see salt and pepper on the table, and maybe some ketchup and steak sauce. But at Pirate Republic Seafood Restaurant, table staples are a little different. Four glass jars contain Brazilian peppers—dedo de moca, biquinho, malagueta and bode—to wake up the taste buds before the main course.

It’s one of the ways that owner Roberto Guerios encourages diners to venture out of their comfort zones, which the original Pirate Republic has been doing for more than 10 years in Fort Lauderdale. Its second location, in Southwest Ranches (6670 Dykes Road; 954.689.3500), shares the menu, which is partly inspired by the couple’s sea travels. Guerios and his wife, Claudia, spent 25 years sailing the Caribbean on a 98-foot wooden schooner called Senhor Das Ilhas. The flavors of the cultures they encountered, plus their own heritages (Italian, Greek, Portuguese, Spanish and more), influenced the couple as they shaped the menu, featuring dishes from the Caribbean, Brazil and Europe. An anesthesiologist by trade, Claudia is now the chef at both Pirate Republic locations.

“Ninety-nine percent of seafood restaurants have the same menu: fried, fried, fried,” Guerios says. “People come expecting [dishes such as a basket of fried shrimp] … I don’t have that.”

The spirit of adventure imbued in the menu is also featured in the decor. This new location keeps what Guerios calls the “pirate DNA.” The flags of real-life pirates and Caribbean islands adorn the back walls and photographs of ships hang on the walls, complementing the statues of pirates at the entrance and a special table. At the bar, the dark-colored wood gives one the feeling of sitting in the middle of modern pirate ship.

Locals have heeded Guerios’ call to adventure at the new location, which opened in January—and has been doing consistently brisk business. Lifestyle went aboard to learn more about its unique dishes.

Bottoms Up: Pirate Republic offers several versions of caipirinha, Brazil’s national cocktail (the base is cachaça, a white spirit made from sugar cane). The most eye-catching? The Devil’s Horn caipirinha, a traditional caipirinha with added heat from two Brazilian peppers that also form red horns on the sides of the glass.

Start Out Right: Guerios has about 10 favorites on the menu. Among them are two starters: octopus pulpo a la gallega with fingerling potatoes and fire coral shrimp, Madagascar shrimp with a variety of Brazilian peppers. “This shrimp tastes like shrimp,” Guerios says. “Not like the Gulf shrimp everyone eats that tastes like cardboard.”

Bowled Over: Standing out at Pirate Republic are the signature seafood bowls with fish, shrimp, clams, mussels, calamari and rice. Customers may add lobster, octopus or scallops. Guerios says the sauce is what makes each unique as well as its origins—seafood moqueca from Brazil, feijoada de marisco from Portugal and asopado de marisco from Spain.

Smooth Spice: Among the fish specialties is vatapá, with a base of palm oil, coconut milk, cashews, peanuts and other ingredients that takes about eight hours to make. It’s then served with steamed fish and shrimp and Brazilian spices and coconut puree.

“If you add too much spice and start to burn, you take a spoon of the coconut puree and quit the burn,” Guerios says. “The sensation is really, really nice.”