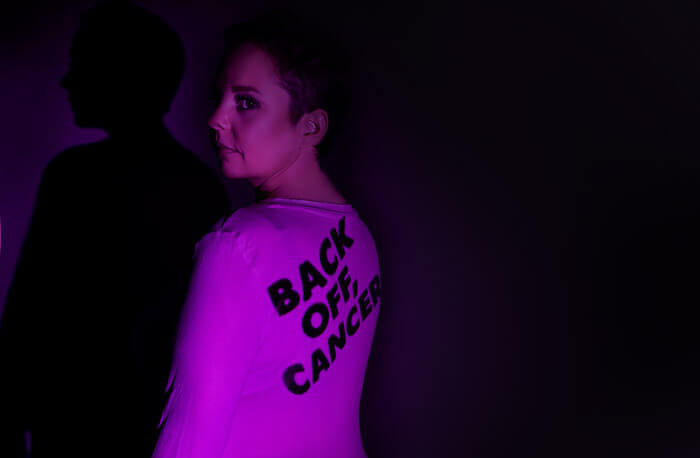 “I had a botched breast reduction surgery in 2004, which left me with monstrous amounts of scar tissue. So, I’ve always had lumps and bumps. When I got pregnant with my daughter, the lumps moved all over the place. My gynecologist told me to get it checked; the ultrasound revealed nothing. That was December 2014.

“After my pregnancy, that same area stayed hard. But the ultrasound said it was fine, so I didn’t worry. In December 2016, the [bicep] area in my right arm became swollen. I had been a bartender for 15 years, so I thought it was something connected to that. I went to another doctor suggested by my dad. He did some general physical tests, and he thought I was fine.

“The swelling then moved to my forearm and into my hand. By early May, I couldn’t see my knuckles because the swelling was so intense. One morning, I went to pick up my coffee cup, and I couldn’t do it. My gynecologist saw my arm and was concerned about a blood clot. She did the exam and goes, ‘This is breast cancer. I’m certain.’ That led me to Holy Cross. On June 16, I received the biopsy diagnosis. I had stage 3 breast cancer.

“When I received the news, it was the loneliest feeling I’ve ever had. God, I have cancer.”

“It started with six rounds of heavy [chemotherapy] because the tumor was so large, they needed to shrink it. The cancer was so aggressive that it ate the lymph nodes. That aggressiveness actually saved my life; the cancer wasn’t able to travel through the lymph nodes and spread.

“I was supposed to do a mastectomy, then radiation. However, when I went to see the surgeon in October, the tumor had shrunk enough to do a lumpectomy. I did 30 rounds of radiation, and 17 rounds of Herceptin and Perjeta [targeted therapy for human epidermal growth factor receptor 2-positive—or HER2-positive—breast cancer).”

• “I started keeping a journal on social media. I did the journaling without expecting anything back. But there were many nights where I would read the feedback over and over and over. It helped me so much. In part, because I felt so alone during the whole experience, no matter how many people were around.”

• “My mom lives in Spain, but she came and stayed with me for nine months to take care of me and the baby. I remember being up one night after chemo, 2 or 3 in the morning. I was violently ill, and just having this woe-is-me moment. My mom sat down and said, ‘You don’t have a choice. You have to [fight through] this.’ From that point on, that’s what I did.”

• “I used to have really long hair. Last July 4, I cut it short. Then, after my first chemo treatment, it started to fall out, so I shaved it. … In December, two weeks after my surgery, I had a good amount of growth. One morning, I went to shower, and my hands were covered in hair. I freaked out. My nurse explained that the anesthesia from the surgery can lead to hair loss. So, in January, I was completely bald. Again. I know, logically, it’s just hair. But it was just one more sign that cancer had done this to me.”

• “I had a friend who refused treatment after her breast cancer returned. She survived two or three more months. She was OK with it. She didn’t want to be sick on her way out. That affected my boyfriend. He realized that you do have a choice. And if you choose not to get treatment, you may not make it.”

• “I feel like right now is the most difficult part of the journey. It’s supposed to be over. My mind is clear. I want to get back to my regular life. But I’m still in physical pain. All my joints ache. Any area that received radiation is extremely sensitive. The chemo and the medication I’m on pushed me into menopause, so I’m going through hot flashes. It’s frustrating.”

• “I don’t think I understood the magnitude of this disease. In the past year, I’ve known a dozen people—family members, people I’ve met—who’ve died from breast cancer. Some of it is that breast cancer is everywhere with the pink shirts and pink ribbons. I never saw it as serious as, like, prostate cancer or colon cancer. You don’t look as sick with breast cancer, you don’t shrivel up like Patrick Swayze in his final days. … But [an estimated 41,400 people, according to the American Cancer Society] every year are dying from it.”

• “Cancer has made me slow down. I enjoy things more. I was very driven and anxious before. I’ve learned that I can change. I can calm down. Now, if I go to bed and there are dishes in the sink, it’s OK. I’ll do them tomorrow.”

• “I’ve learned that I can have more control over myself, my thoughts. There is empowerment, just knowing that you went through this.”