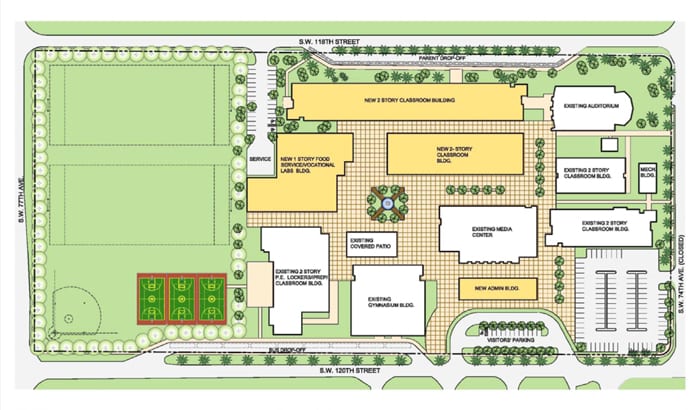 When the general bond obligation for new school construction in Miami-Dade County passed last year, Palmetto High was not on the list. What followed was intense lobbying by Pinecrest parents and officials, including Mayor Cindy Lerner and county school board member and Vice Chair Lawrence Feldman, whose district includes the village. The result was a $29 million commitment to rebuild the 50-year-old school complex, with lots of high-tech upgrades thrown in.

“There are a lot of memories as to what that school was years ago, which transcended the realities,” says Dr. Feldman about Palmetto High and its reputation for academic excellence. “The realities included leaks, broken air conditioning, poor wiring and a lack of high-tech tools like smart boards.”

In a meeting with the Student Leadership Advisory Council in April, Dr. Feldman revealed what the new campus could look like.

The first wave of new “smart boards” – interactive online walls that look like they could be used by CNN on election night – are due to be installed by August, in time for next year’s classes. Also in the works is improved bandwidth for the school’s Internet access and droves of HP tablets for students.

As for the physical plant, four new buildings are planned (classrooms, administration offices, science labs, etc.), with upgrades to the existing auditorium and media science building. According to Dr. Feldman, building should begin about a year from now and take about three years to complete.

“After the start of this school year we’ll hire an architect,” says Dr. Feldman. “We’re hoping that construction can start on one building while another one is being designed.”

Other changes include a central courtyard with a fountain, new landscaping, a baseball diamond and soccer fields. “We want to make it look like a university campus,” says Dr. Feldman.