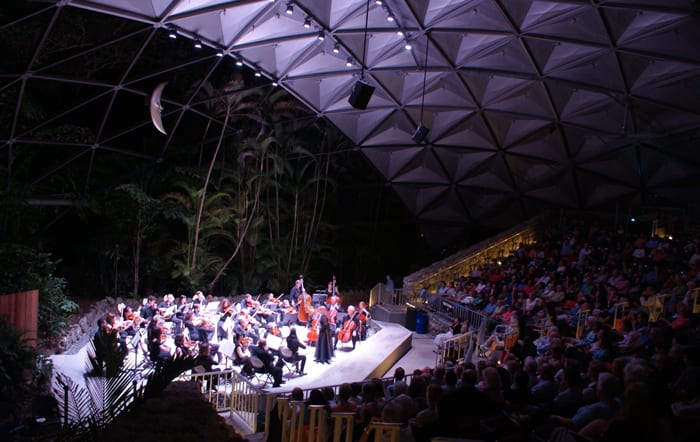 When the Village of Pinecrest purchased Parrott Jungle in 2002, the idea was to make it the central park of Pinecrest. After all, Pinecrest didn’t (and still doesn’t) have a downtown, or even a cozy village square where citizens can gather in a public space.

At first the Jungle, renamed Pinecrest Gardens, was used for a variety of community events, including rentals for private parties. The gardens were still fresh from their Parrott show days, and commanded a $5 admission fee for a walk-through.

Then came the economic hard times of the Great Recession, and the inevitable reduction in village services. Programs were cut and the jungle part of the Gardens went to the weeds; admission became free.

“When I came in [Nov. 2008] the village counsel had the idea of bringing back the Banyan Bowl,” says Mayor Cindy Lerner. “No attention had ever been paid to it. There were still the woodchips on the stage from the old bird shows.”

But discussions were underway with cultural institutions across Miami-Dade, to see if they would perform in an open-air setting, and the city soon hired marketing consultants to see if a performing arts center could work. Public opinion was strongly in favor of it, so the game was on with a master plan that included capital improvements and increased funding.

By then the Community Garden Charitable Fund, better known as the Garden Fund, had been formed by master gardener Karen Mashburn and lawyer Paul Sasso in an effort to restore the botanical side of the garden. As of this year, the Fund has restored 14 areas of the garden.

“We’re thrilled with the state of it now,” says current president Lynn Wille Fichman. “It was a wreck when we started.”

“The botanic efforts were tremendous, turning the garden from a jungle back into a garden,” says Lerner. “It was a huge investment of both tender loving care and the ripping out of a lot of invasive plants.”

The main stage, the Banyan Bowl where Parrot Jungle put on its animal acts, was also a wreck. And that became the first focus for the cultural mission. “We put in the lighting and a sound system and a stage,” says Lerner. “We started the programming and it has taken off beyond our wildest imagination.”

For that to happen, several other pieces had to come into place. The first was the return in January 2009 of City Manager Yocelyn Galiano Gomez, who had managed the Gardens during its first heyday under Mayor Evelyn Greer; Galiano Gomez enthusiastically supported the park’s cultural renaissance.

Next came a shift toward using the Gardens for a variety of purposes, reflected by the village’s Botanical Committee becoming the Pinecrest Gardens Advisory Board. Consisting of five members, three appointed by city council members and one each by the Pinecrest Garden Club and the Garden Fund, its purpose goes beyond the botanical to educational, historic, recreational and, above all, cultural arts functions.Finally came the decision to take the Gardens away from the Parks & Recreation Department, and make it an independent department with its own director. The person they hired was Alana Perez, a former international advertising director who had just spent four years as marketing director for the Florida Grand Opera. Under her guidance culture in the park blossomed—as did revenue from performances and entrance fees.

“Alana has done a great job directing the Gardens,” says Garden Fund founder Sasso. “She started from nothing and in three years has created an amazing platform of events to serve the public.”

Under Perez, Pinecrest Gardens has developed several signature events, and has dramatically raised its profile as an arts hub. “The focus of the council has been to raise it [the Gardens] to a cultural arts park level,” says Perez. “My first mandate was to bring the Banyan Bowl to life. When I was hired there were no lights, no ventilation, no sound system. It was a geodesic dome with antiquated seating.”By the end of 2010 the bowl was ready for its first jazz series, which was launched in conjunction with South Florida radio station WDNA. “There were small audiences that first year, but we saw the future, and it had legs,” says Perez. Now in its fourth season, the South Motors Jazz Series is a popular and profitable event.

The Gardens also began building its schedule of festivals. When Perez came on board there were three a year; now there is one a month.

A holiday festival worked well, as did an Earth Day festival; a Latin food festival did not work (“Probably because there is so much Latin food available around here,” says Perez) and was dropped. “We experimented to see what worked.” The Banyan Bowl also became a venue for theater, dance, and movies.

The theater now includes children’s as well as adult performances, with one work by Shakespeare, one musical and one either comedy or drama each year. Every performance also has one ‘sensory friendly’ version for children with autism or other handicaps that make it difficult to attend boisterous live events.

For dance the Gardens works with multiple companies, including this season’s Live in Color dance troupe, a performance by Siempre Flamenco, and the innovative Karen Peterson and Dancers, which combines dance artists with—and without—disabilities.The sweet spot for Perez, however, are the family friendly activities, including art exhibits for talented students and the Friday Family movie nights, where the Banyan Bowl plays titles like Teenage Mutant Ninja Turtles and Monsters University. Families arrive early, and the kids get the added bonus of flash light tours of the darkened gardens.

With its fourth cultural season under way, Pinecrest Gardens is now putting an added emphasis on education, especially about environmental issues, ecology, and horticulture, using its facilities to advantage. It’s also pushing harder for cultural grants from the county and state, and hoping to increase revenues and so wean itself from the more than $1 million in village operating funds it consumes annually. So far its moving in the right direction: Since Perez has taken charge, annual revenues from facility rentals and festivals have jumped from $125,000 to $460,000 a year.

The final test of the Gardens ability to become a world-class cultural arts park may lie with neighborhood relations. While most of the community wants the park to expand its cultural programs—70 percent, according to one survey—neighbors would prefer a more passive, if not smaller, park altogether.

“The struggle has always been to balance the success of the facility and the impact those things have on the neighbors and the residents,” says Galiano Gomez. “So we are constantly monitoring and making adjustments. Any time we have a large festival, for example, we require off-site parking with a shuttle. Little things like that make a difference.”

As for Pinecrest Gardens’ place in the community,  “It’s definitely our little jewel,” says Galiano Gomez. “And my favorite place.”