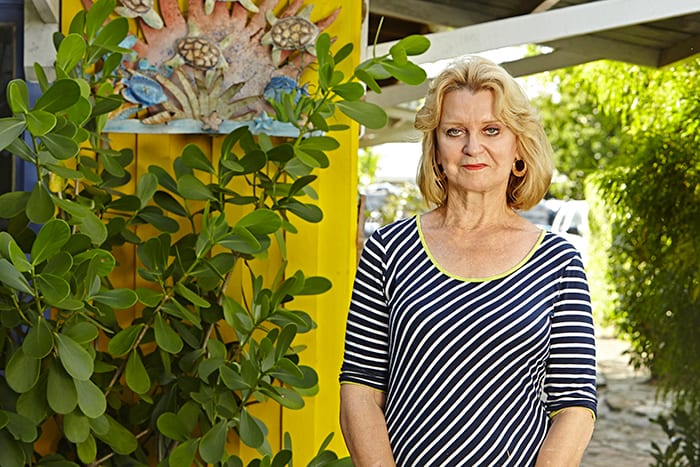 Independent plant nurseries were once a common sight in South Florida, back when land was less expensive. Some were just an open lot stacked with bags of mulch and rows of potted plants, others more complex, enclosed compounds with exotic palms and flowering shrubs. Every weekend gardener had his or her favorite.

Today, local gardeners have basically two choices: A visit to the garden shop at Home Depot or a road trip to Homestead. Except if you live in or near Pinecrest. There you can go to Galloway Farm Nursery, about a mile and a half outside the village limits on 87th Ave.

Galloway is run by Pinecrest resident Pat Kyle Lawrence, as feisty a businesswoman as you’re likely to meet in the nursery business—or any business, for that matter. Her 2.3 acres of potted greenery, shade houses and growing yards is a thriving enterprise on increasingly precious land. “It’s kind of hard to move around in here ‘cause we can’t find places for everything,” she says. “We’re so damn busy.”

People come here for orchids, bromeliads, bonsai, flowering bushes, palms and increasingly for edibles, like a new line of ‘1870’ heirloom tomatoes. “We sell lots of veggies,” says Lawrence. “We’re selling three times the amount of vegetables and herbs that we used to. It’s like everyone has a victory garden.” Galloway has also expanded from the simple plant vending operation it started as more than 30 years ago. Today they do landscape design, including the installation of sunken gardens, ponds and fountains. “We did one pond in Gables Estates with salt water and sharks,” she says. “They were sand sharks, but still…”

Lawrence’s ties with Pinecrest go deep. She lives on Flagler Boulevard in the former location of a rare bird farm (“They had ostriches running down the street,” she says), and as the recent president of the Pinecrest Garden Club (“My time was the best. You can ask anyone!”) she is intimately tied to the community. She is also a regular supporter of Pinecrest Gardens, where she donates plants for fundraisers and garden installations. “She’s been incredibly supportive, and she is so knowledgeable,” says Candy McDonald, a Pinecrest realtor who is on the board of Pinecrest’s Community Charitable Garden Fund. “Her late husband designed quite a few areas in Pinecrest Gardens.” In appreciation for James Burns Lawrence, who passed away unexpectedly at the couple’s Pinecrest home in March of 2013, the Garden Fund dedicated its Caribbean Hammock to his memory.

Despite the loss, Lawrence refuses to miss a beat, carrying on the business she and her huaband started in 1981. Indeed, the stream of customer traffic into Galloway Nursery is a testament to her attention to customers, many of them regulars that she banters with in her wise-cracking way. “Why do people come here? Maybe it’s because we’re across the street from the Norman Brothers. It’s like free advertising for me.” “The owner is a doll,” quips Jason Flowers, a Pinecrest resident and Galloway regular. “I’m a gardening freak, and they have a great variety. And they’re a close run. I can’t take the drive to Homestead.”

That proximity is what has pressured most independents to pull up stakes and leave the area: the lure of cashing out. As for Lawrence, “I’ve been offered millions of dollars for this land, but I’m not interested,” she says. “This is the last independent nursery in the area, and my family is here—my employees. They are my family. Some have been here 15 or 20 years.” Like Lawrence, they don’t have plans to uproot anytime soon.