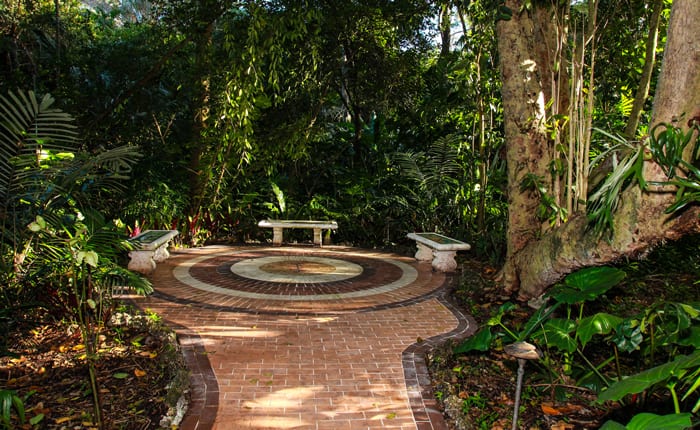 From Jungle to Gardens

by Evelyn Robles
0 comments
It has been more than a decade now since the Village of Pinecrest purchased what was then Parrot Jungle for the price tag of $25 million. The 14-acre compound had been “let go” by its previous owners and was, according to its new owners, “a real mess.”
Renamed Pinecrest Gardens, today the grounds are immaculate, a horticultural showcase that grows richer with plant life every year. And a big reason for that—beyond the small but dedicated permanent Gardens staff—is a group of local women who rolled up their sleeves and took on what amounted to a Herculean task.
“When the city acquired the property it was awful, in disarray,” says Candy McDonald, one of the original volunteers who worked on the Gardens. “It had been an amusement center, so they never treated it like a garden. They had all this crappy stuff [growing there].” Beyond the poor plant selection, the gardens had been woefully neglected and were overrun with weeds and vines.
The community response was the Pinecrest Garden Club, started in 2002 by village residents Pat Kyle Lawrence and Germaine Butler, the former an owner of Galloway Nursery Farms and the latter a gardener and community activist. “I happened to be on a garden tour and they had a little table there, getting people to join the club,” says McDonald. “I joined the board. By the time we had our first meeting 40 people showed up.” Their mission: To clean up the mess.
And that is just what the club did—working with Craig Morell, a Palm Beach horticulturist who had just been hired by the village to oversee the green side of Pinecrest Gardens. “In those days we were literally on our hands and knees, in the dirt,” says McDonald. “We helped Craig do everything. We weeded, we unloaded trucks of orchids, we did whatever it took.”
Horticulturist Morrell has now been on staff for nine years, working to create a botanical showplace with nearly 1,000 species of plants. It was a far different scene when he accepted the job.
“When the facility was transferred from Parrot Jungle to the public, it needed everything,” says Morrell. “It was an extremely dense, weedy area. Now it’s been gentrified. We took out all the bad things and put in good things.”
Morrell says about 300 new species have been introduced to the garden, many from his own private collection when he moved from West Palm Beach. But a lot of new species—as well as new, elegantly designed spaces—were added when the ladies of the Garden Club stepped up their game and created a 501c3 non-profit fund to raise money for landscaping projects. By then the weeding had been done, and it was time to bring in the pros.

THE GARDEN CLUB 2.0
The Community Garden Charitable Fund, known today simply as the Garden Fund, was formed in 2006 by Garden Club member and master gardener Karen Mashburn, with help from Paul Sasso, a Pinecrest attorney who’d run unsuccessfully for mayor but who wanted to contribute something to the Village. By 2007, the Garden Fund was underway with its first project in Pinecrest Gardens—an $8,000 restoration of the “Garden in the Trees,” a canopy of orchids, bromeliads and ferns nestled in the property’s tallest oaks.
Project followed project, from the simple purchase and installation of two Golden Royal Poinciana trees in 2008 (cost: $1,500) to the renovation of the 5,000-sq.-ft. Terrace Garden in late 2010 (cost: $18,260), to the creation of the Caribbean Hammock Garden in 2013 (cost: $15,000).
“I was a member of the Garden Club when Karen [Mashburn] asked me to join the Charitable Fund,” says Lynn Wille Fichman, the Fund’s current president. “We got to work right away, but the Gardens needed so much. It seemed overwhelming.” Now, seven years later—Fichman became president three years ago when Mashburn stepped down for health reasons—the Fund has completed 14 projects and made a major impact.
“We’re thrilled with the state of it now,” says Fichman. “There is such a concentration of different horticultural elements. We feel that it will someday be a world-class botanical garden.”
“They updated a lot of areas that were not in good shape, and brought them to life in a way they never were before,” says Alana Perez, who has been the director of Pinecrest Gardens since 2009.  “It looks better now than it ever has. It was overgrown with invasive plants, and now it is a gorgeous, finished botanical beauty.”
Fichman’s favorite project was the reclamation of what had been known as “The Hidden Garden,” an area that Parrot Jungle had used as a dumping ground. It is now a quiet, meditative space, with three benches occupying a circle in the middle of rich, complex foliage. “This was literally a garbage dump during the time it was an animal attraction,” says Fichman. “We wanted to create a space with a canopy.” Which they did.

TODAY’S GARDEN
While the Garden Club and Garden Fund have contributed their share to the botanical renaissance of Pinecrest Gardens, the Village government has been far from slack. In addition to its payroll for a full-time horticulturist and three part-time assistant gardeners, it pays for garden maintenance and its own planting projects—as well as most of the overall annual $1.8 million budget of the Gardens.
Indeed, Pinecrest Gardens as a whole—only about half of which is botanical jungle—is the focus of the Village’s efforts to create a cultural hub. Most of the village capital funds earmarked for Pinecrest Gardens have gone to infrastructure projects, such as a new library, a new community center and a newly refurbished Banyan Bowl. All are aimed at making Pinecrest Gardens an educational as well as visual and performing arts center, broadening its community mission.
You see this reflected in the evolution of the Village’s Botanical Master Committee, formed a year after the Garden Fund began, with the mandate to create a five-year plan for the Gardens. That board has since become the Pinecrest Gardens Advisory Committee, whose new five-year plan broadens the facility’s mission to include cultural goals—though its five-person board still includes one member each from the Garden Club and the Garden Fund, along with three Village Council members.
The botanical needs of the Gardens continue, however, in what Fichman calls “the ever-changing, ever-evolving” tapestry of the garden—which already boasts the largest Talipot Palm in the country, one of the largest banyan trees in the country and several century-old bald cypress trees that pre-date Miami and are the only urban survivors of their kind (their genetic relatives live in the Big Cypress National Park.)
“We have quite a number of rare species, some of which are among the few found anywhere in the country,” says Morell. “Some are rare in the extreme, some just not common.” As for the Garden Fund, “They’ve been phenomenal,” says Morell. “Sometimes they would start a project, and several years later we’d take [new] plants from that area and put them in another place. They’re the initiators, we are the propagators.”
Says Garden Fund co-founder Sasso, who is still on its board, “The Fund is really all about the people and the people are quite amazing. The volunteers are the ones who made the concept take off.”

THE GARDEN FUND SOIRÉE
Since its founding in 2007, the Community Garden Charitable Fund has focused exclusively on one mission: To assist in the beautification of Pinecrest Gardens. The work of the Fund is to continuously help enhance this botanical showcase by funding specific botanical improvements.
To raise funds for these projects, the Garden Fund holds an annual soirée in the gardens they help improve.
This year’s 8th Annual Soirée will take place on Saturday, March 1, at 7 p.m. The cost is $125 per person for open bar, dinner, dessert bar and concert; and $40 for concert-only attendees.
For further information about tickets, or about sponsorship opportunities, call 305.669.1028.
Read More