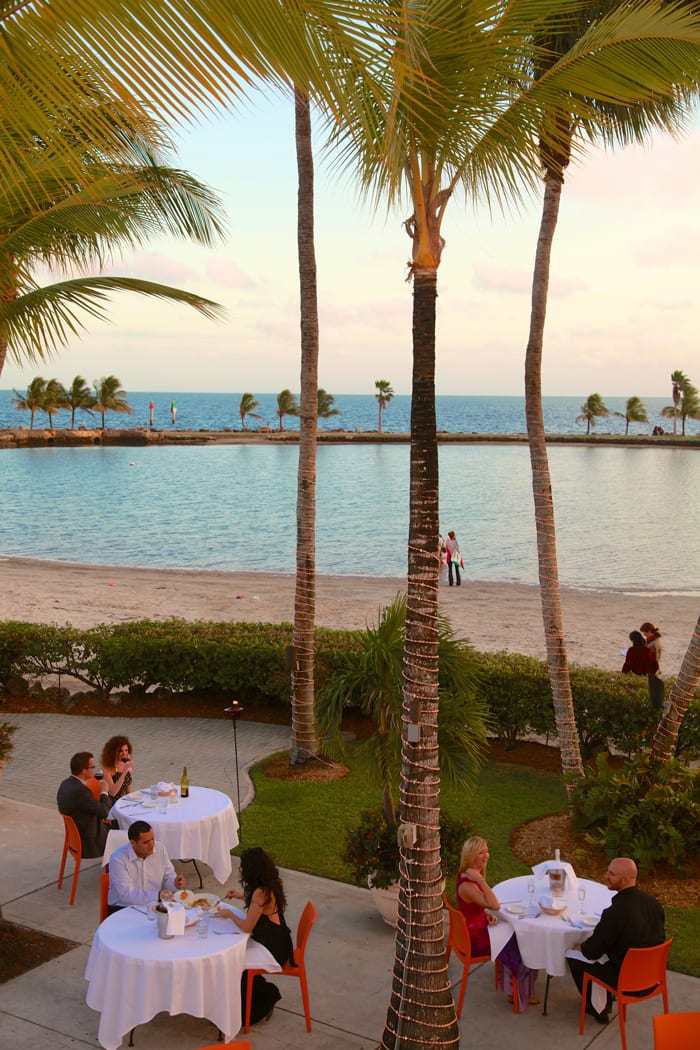 The 10 Most Romantic Restaurants (In and Around Pinecrest)

What does it take to be a romantic restaurant? Is it the view or the service? Is it the ambience or the food? Should it be exotic or cozy?

Like these questions suggest, it rarely comes down to one thing. Instead, that ineffable feeling of romance comes from a combination of things, from sights, sounds and smells to tastes, people and places.

Nonetheless, there seem to be certain laws when it comes right down to what makes a restaurant romantic.

First, it should be intimate—hushed, with low lighting and places just for couples. Next, the physical setting has to be special, either beautiful or unusual—or both. Finally, the service and the food must both be top flight.

This doesn’t mean all romantic restaurants are the same. Far from it. Some are simple and sparse, others luxurious and over-the-top. Some are rough-hewn and rustic, others refined and elegant. But all share a common thread in Cupid’s bow: They deliver a magical evening. And that is just what St. Valentine ordered.

What follows are the 10 most romantic restaurants in and around Pinecrest, in order by their distance from the center of Pinecrest.

Dining at the Red Fish Grill is truly an exotic experience, in a setting that is way out of the ordinary. The trip itself is a mysterious journey, down a long, dark road to a spit of land that juts into Biscayne Bay. Everything about Red Fish drips romance, from the historic building where it is housed to the light-dressed palm trees on the outside patio to Biscayne Bay beyond. Sunset here is a lovely experience, as is the moonrise. Just as important is the food, which consists of a short but wonderful menu of very fresh seafood prepared in a light and tasty way by their Cordon Bleu-trained chef. Easily among the top seafood restaurants for its food alone, the tropical ambience puts the Red Fish Grill over the top.

Of all the restaurants actually within the boundaries of Pinecrest—which means located on Dixie Highway—none come close to the elegance of Two Chefs or its extraordinary cuisine. The brainchild of chef/owner Jan Jorgensen, Two Chefs presents masterful dishes. Chef Jan, who also runs an adjacent cooking school, changes the menu every week to take advantage of seasonal ingredients and to keep things interesting. His wait staff is also superbly trained and knowledgeable about the food and wine. Two Chefs’ continental cuisine is served in a lovely setting, with warm wood accents, low lighting, a back-lit bar, alabaster chandeliers and the warm flicker of firelight from a wood-burning oven he uses to finish off different dishes, including the occasional focaccia. If food is the language of love, Two Chefs is romance incarnate.

Barcenoleta is a tapas bar on a side street. It is not a fancy place, but is nonetheless incurably romantic in the same vein as a slow jazz composition by Gerry Mulligan or a rainy night on the streets of Paris. It takes you away from South Florida and puts you in an effortlessly cool café on the outskirts of Madrid or Barcelona. Its food is tapas style, so you can sample lots of different dishes without going overboard. The Spanish food includes dishes such as Caracoles (snail) with Rabbit Sausage, and Rabo del Toro al Vino (oxtail in wine with polenta). Combine these with a chic ambience, super friendly staff and a great drink list, and you have the most truly romantic spot in South Miami.

Few locations are more dramatic or romantic than the Biltmore Hotel and its two signature restaurants. Walking a date through the main lobby, with its arched 25-foot ceilings (make sure you enter via the second-story lobby), is one of the “wow” experiences of South Florida; that alone brings magic to the evening. Inside, however, are two culinary treats. The first is the courtyard Italian restaurant Fontana, with its magnificent fountain and tall surrounding columns. There is no other space like it south of Washington or New York. If that feels too busy or exposed, however, you can withdraw to the Palme d’Or. This French restaurant is not cheap—the prix fixe menu runs $105 per person—but the food is superb in a traditional French way. The interior could be an elegant apartment in Paris; for couples there are couches to share as your meal unfolds. Both restaurants are unbeatable for upscale, romantic dining.

If power is the ultimate aphrodisiac, then Abbracci is the place to turn your date’s head. It’s a favorite spot for the local power elite, as well as for visiting VIPs, from Gov. Rick Scott to former President Clinton. One reason they come is for the food—sea bass Carpaccio, black ravioli with lobster, wild mushrooms with grilled polenta—so brilliant the restaurant has published its own gourmet cookbook. Another reason is owner Nino Pernetti, who personally greets all his guests and makes you feel not only at home but special. That sense of being fastidiously cared for translates into a perfectly attentive wait staff, which makes you the center of the experience. While there are many elegant Italian restaurants in Coral Gables, Abbracci is the standard bearer, now celebrating its 25th year.

For long-time South Floridians, Coconut Grove has lost much of its old-village charm, replaced by generic venues like Johnny Rockets and the Cheesecake Factory. Fortunately there’s Peacock Café, an oasis of the old Grove. The restaurant itself is the original courtyard of a Grove pioneer home; the indoor seating, while vintage in appearance, is part of a large building that houses a parking garage (a blessing for patrons, by the way). No matter—the courtyard is delightful, with brick flooring, lush planting, dangling lights and jazz trios on weekends. The atmosphere is charming and dreamy, and the food is a nice mix of organic salads, grilled meats and fresh fish. One hardly notices this place, hidden right next to the old Coconut Grove library, but you and your date won’t soon forget the romantic experience.

Gibraltar is the kind of place you take your date when you want to ask her (or him) to marry you. Located in the Grove Isle Hotel, the last of the four high-rises that comprise Grove Isle, it is far from the madding crowd of the Grove’s central commercial district. It is also a magical place at night, with a stunning view across the water to the twinkling lights of Key Biscayne’s waterfront homes. There are several romantic places to eat and drink, from individual tables that face the water to the two fire pits where you can sit on couches and nurse your after (or before) dinner drink. The food reflects the name: A culinary gateway to the Mediterranean, with a mix of Spanish, Italian and Greek. Yes, it’s pricy, but what does love cost?

Long before the advent of Mary Brickell Village, restaurateur Steve Perricone created his eponymous establishment in the shadow of Miami’s Brickell Avenue. Built from the wood of an old Vermont barn, it feels ancient and weathered. It is also adjacent to a park filled with oak trees (one old banyan tree is actually part of the main dining area, which is where you want to sit); these oaks are lit at night, and on most evenings are revealed when the roof of the restaurant is retracted. Add to this a harpist who plays on Thursday, Friday and Saturday nights, and you have a formula for an utterly romantic evening. The food is also reliably good Italian cuisine (Perricone credits his grandmother’s recipes) with an emphasis on fish and steak, along with some unique dishes like their baked Brie with almonds and apricot drizzle.

If romance means going somewhere far from the normal world of mere mortals, then Azul is the place for you. Yes, it is expensive, but the cuisine is world class. Known for its sophisticated French flavors with Asian influences, it’s gone even more creative with rising star chef William Crandall of NoMi restaurant in Chicago (think smoked lettuce with applewood dressing, or risotto with three artisanal cheeses, licorice, shrimp and carrots!). Even more important is the setting. The star restaurant of the Mandarin Oriental hotel on Brickell Key, it faces Miami’s financial district and downtown—so you are looking at a view of the city hitherto unknown. It feels like a new world, or the same world seen through very different glasses. Azul is guaranteed to sweep your date off her (or his) feet.