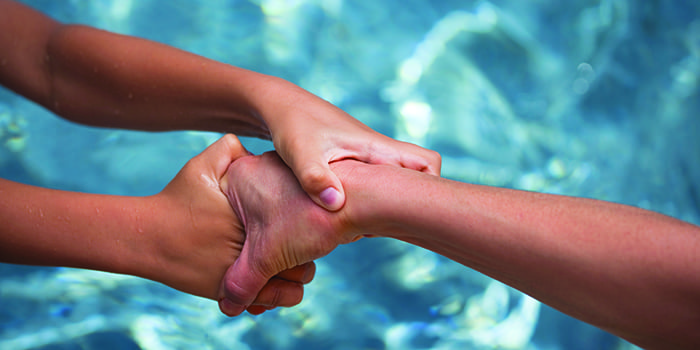 Heros save the day

A typical late Monday morning turned into a not-so-normal day for Carol Ann Brown. On January 12 around 11:23 a.m., Broward Sheriff’s Office dispatcher Audrey Ahibum answered a 911 call – someone had driven a car into one of the canals in Margate. Brown was traveling down Copans Road just east of State Road 7 when she lost control of her gray Hyundai and drove straight into the waterway.

Officer George Woolley was the first policeman on scene. He saw a woman panicking as she was being submerged underwater. In all of his 25 years on the force, this was his first time having to dive in the water to save a person from their vehicle.

Shortly after Woolley’s arrival, Coconut Creek veteran officer Larry Christopher was on scene to assist. After 26 years on the force, Christopher had already taken the plunge into this waterway two times before during his career. He was prepared and ready to go.

“The car was about half-submerged, and we could see a white female in the front driver’s side and she was yelling as we were swimming towards her,” Christopher said.

Woolley then grabbed his life pole, a tool used to break windows and cut seatbelts, tossed it to Christopher, and both officers then stripped off their equipment and dove into the lake just as the water was reaching Brown’s waist.

“The car was going under and she definitely would have died,” said Christopher.

Christopher smashed out the windows and they both grabbed Brown from the back driver side window just as the car was being fully submerged, then swam to safety. “It’s what I would call a controlled panic as we were swimming out there, and fear, and then a lot of joy and happiness once we got to the bank,” Christopher said.

Woolley could see the fear in Brown’s face. “She was so shook up, she was so scared…she didn’t actually say much.” Brown appeared in shock at the time.

Division Chief and spokesman for Margate-Coconut Creek Fire Rescue Dan Booker advised that she was conscious and alert. After the incident, she was taken to Northwest Medical Center for evaluation.

“We’re both very proud today that we actually saved her life,” Christopher said. “This is what police work is about to us.”