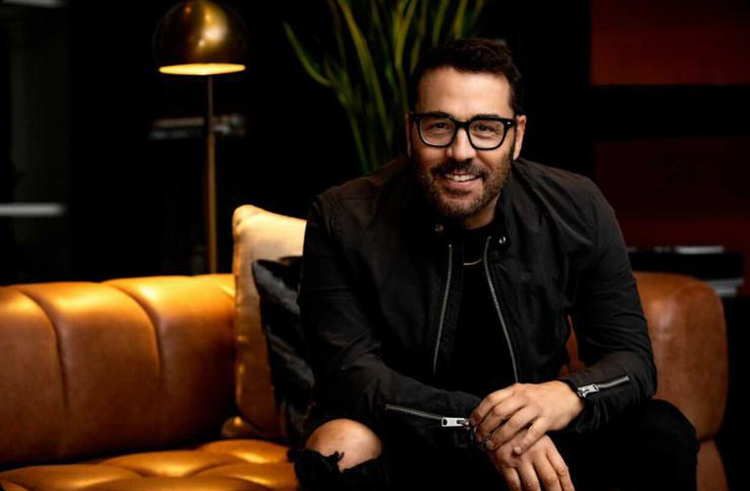 Since regularly taking the stage as a stand-up comedian in 2017, in addition to his ongoing career as an actor, Jeremy Piven has heard variations of the following post-show comment more than once.

“We had no idea you were this funny.”

On the one hand, he gets it. For some people, he’s frozen in time on television as Hollywood agent Ari Gold on HBO’s Entourage (2004-2011) or, more recently, as the title character in the British period drama Mr. Selfridge (which ran on PBS; 2013-2016)—or on the big screen for any of the more than 50 feature films in which he’s been involved.

On the other, he cut his comedy teeth doing sketch comedy at The Second City (he toured with the improv theater troupe out of college), and he’s been on stage since doing Chekov at age 8 at his family’s Piven Theatre Workshop in Evanston, Illinois.

But that said, his recent run of stand-up shows, Piven says, is a blessing.

“Selfishly, it’s a way for people to spend an hour with me and get a new sense of who I am,” he says.

South Florida comedy fans have an opportunity to spend that time with Piven this week when the three-time Emmy Award winner (for his work as Gold on Entourage) takes the stage for five shows (Jan. 21-23) at the Palm Beach Improv (550 S. Rosemary Ave., West Palm Beach).

He recently spoke to Lifestyle about his stand-up journey—and why Mike Tyson worried that Piven didn’t have his own entourage.

This is a surreal time for someone in comedy to be trying to score laughs. Do you touch on what’s happening in the country right now, or do you just stay true to your set?
There’s so much going on right now; you’d be a fool not to address it on so many different levels. But the reality is, we’ve never needed to laugh more than right now. And there aren’t a lot of places open. I’ve been to the Improv in West Palm Beach a few times, and the crowds have always been incredible. It’s one of my favorites houses in the country. So, I’ll be there on the 21st for five shows—and I want to address it all.

Being in Los Angeles, nothing is open. We’re all kind of Zooming each other. I haven’t worn hard pants since March. I might even put on a watch for the good people in West Palm Beach.

Much of what is written about your interest in stand-up points only to the past few years. But you performed in 2008 at Montreal’s Just for Laughs festival. What do you remember about that night?
I’ve been an actor since I was a child. The actor’s nightmare is that you get thrown on stage, you don’t know what play you’re in, and you don’t know your lines. How do you dig your way out?

The show at Just For Laughs—I’ve never watched it, and I never will, because it’s so horrifying—happened because my then-agent said, “Hey, we have this great offer for you to host the biggest comedy festival in the world.” I asked what they wanted me to do, and he said, don’t worry, they just needed me to host.

So, I bring a buddy of mine to Montreal who does stand-up. He suggested that we check out the venue the day before the show. When we get there, my friend goes up to one of the bookers and asks, “What do you expect from Jeremy?” And [the booker] says, “Well, it’s going to be on live TV. He’ll start with a quick 20.”

My friend goes, “A quick 20 what? Jeremy has never done stand-up.”

“Oh, he’ll be fine,” the booker goes. “And then we have six comics, and he’ll do five minutes between each comic.”

That’s an additional 30 minutes. So, you’re talking about 50 minutes of comedy on live television for a guy who had never done stand-up. We went to dinner and my friend goes, “Start thinking of stories right now that you think are funny. We’re going to gather them all. It’ll be a through line for the evening.” We literally mapped out the 50 minutes the night before.

If a stand-up comic heard this story, they’d probably go into a seizure. It was terrifying.

The good news is that I was just dumb enough to think I could pull it off. And we did. But I had no business being up there.

When you decided to dedicate yourself to stand-up a few years back, was it humbling to put yourself out there, especially during those initial months?
It’s all humbling. Every time I step on a set as an actor, it’s humbling. First of all, it’s an honor, because you get to create. And then, it’s your duty to do the best you can.

I really started doing stand-up heavily in 2017. To a stand-up comic, someone who’s only been doing it a few years is still like an infant. But I’ve been on stage since I was 8. My background is in sketch comedy. I put in probably a decade over at Second City. I’ve been improvising in all my 70 movies and TV shows. So, all roads lead to stand-up.

It is humbling, but that’s how you get better. You have to put your ego aside, get in there and have a great time.

Were there nights early on that had you rethinking the decision?
In the beginning, it was tough sledding. And I made it even tougher on myself by playing dive bars, where there’d be a couple people in there just waiting for the band to start. I remember I got up at this one place, and I said, “Hey, you guys are probably wondering what I’m doing here.”

And some guy in the back goes, “Yeah, what the [expletive] are you doing here?”

I bombed so badly that night. [Afterward], I’m thinking that maybe I’ve never been funny. I started questioning everything. But then you just get back on the horse. That’s how you get better.

You’ve been co-hosting the “HotBoxin” podcast with former heavyweight champ Mike Tyson—and you’re known to do a Tyson impersonation. Are you at all worried that he might not like the impersonation and just sucker-punch you, like he did to Zach Galifianakis in The Hangover?
The great thing about Mike is that he’s had such an epic journey. One of the reasons we all gravitate toward him is that he’s so honest and open and raw. He’s a gentleman and a self-proclaimed pacifist now. That being said, he’s still Mike Tyson. So, I asked for his blessing because I do some bits about prior interactions with him.

And he goes, [Piven does his Tyson impression], “Hey, listen, guys, that would be an honor basically. That would be a blessing, brother. … You don’t have to be afraid. I’m a vegan. I lost 100 pounds. I made millions, but I cry all the time. I’m very sensitive. … I’m sorry, what was the question?”

I remember, he did Entourage, and we worked so well together. I was walking him to his car afterward, and he was with his bodyguard, and I was alone. And Mike goes, “Where is your entourage? You don’t have an entourage?”

And his bodyguard goes, “Look, Mike, Jeremy can handle himself.”

And Mike goes, “This dude? He looks like he’s the captain of the Jewish debate team.”

That hurt. Because I never made captain.