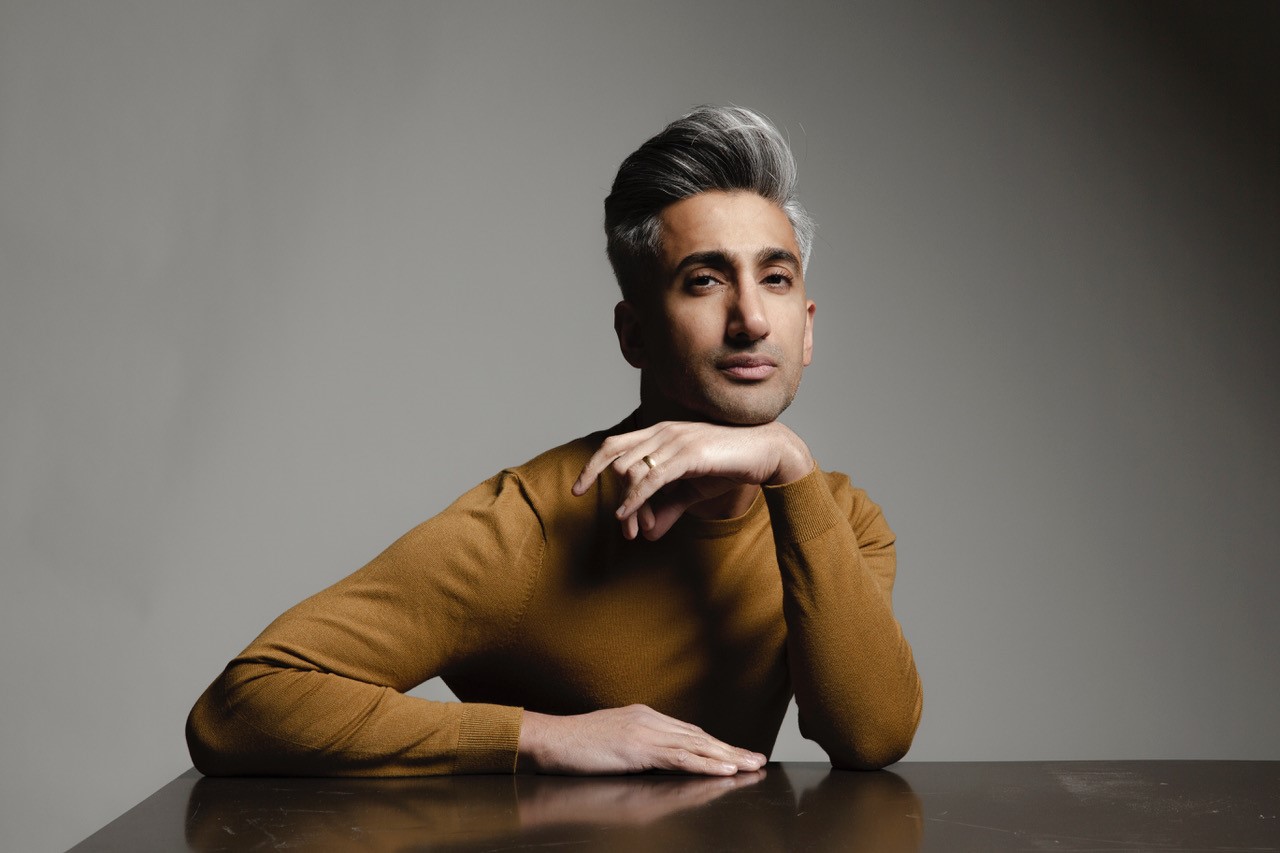 The Queer Eye co-star goes up close and personal with Lifestyle.

Chances are, if you’ve opened your Netflix account recently, you’ve seen a preview for the show Queer Eye. To some, it may look familiar, a shortened version of the original Queer Eye for the Straight Guy that premiered on Bravo in 2003. To others, the title may be recognizable for a different reason. This re-imagined reality show has been breaking cultural barriers since its release in February 2018.

Following the same format as its predecessor, the new Queer Eye follows a group of gay men (the “Fab Five”) as they visit small towns across the United States and introduce fashion, design and lifestyle changes to men and women nominated by their friends and families. For some of the show’s featured individuals, the visit from the Fab Five marks their first interaction with members of the gay community.

One member of the Fab Five, Tan France, has enjoyed success beyond starring in all five seasons of Queer Eye. Since moving from South Yorkshire, England to the United States, France has launched two successful clothing lines, appeared in Taylor Swift’s music video for the song “You Need to Calm Down,” and written a memoir, Naturally Tan.

In a candid interview with Lifestyle during a recent visit to South Florida to put on a fashion show at the Riptide Music Festival, France opened up about his past and present.

You’re very connected to your South Asian roots. How do you reconcile the pride you have regarding your heritage with the culture’s lack of acceptance regarding aspects of your life and lifestyle?

I am in a very privileged position. I’m not only South Asian, but I’m also very much Western. I have a vantage point that many from my culture don’t. I also immersed myself in the Western culture when I was growing up. Many people who are raised in England or the U.S. are solely focused on the immediate community because that is what we encourage. That isn’t a bad thing. It protects us from the difficulties or pressures of the West as foreigners. I have the luxury of experiencing both.

Some parts of my life may not be the norm for the South Asian community or even the Eastern community in general (Asian, Middle Eastern, South Asian). However, I know that there are many kids within those communities who desperately want or need somebody to represent them—to be a version of them on screen. That’s why it is my responsibility. I feel privileged to be in a position to say, “You haven’t seen this before. That doesn’t mean it shouldn’t be seen … and here’s the best version of it I can offer.”

You’ve talked openly about hiding things from your family—trips to New York, your sexuality, fashion school, your marriage—because you didn’t feel that they would be accepting. What advice would you give someone in that position today?

One thing I would say is do not go to a foreign land without checking with your parents. That is so unsafe and unwise, and times are even more dangerous than they used to be.

I know that, especially in very tight-knit communities like mine, a little white lie is sometimes a necessary evil. You know that doing something that’s so ordinary to the West is going to upset your parents. It’s something our parents don’t understand because they weren’t born or raised in the West.

Choose the things that you are doing to go against the grain, the cultural norm, and make sure it’s not dangerous in any way. Find people to tell, even if it’s not your parents. Find somebody that you can be honest with who is an adult, an aunt or uncle or older relative, and say, “OK, this is a thing that I’m doing. I know my parents will not accept it, and I’m not telling my parents. But it is something that is completely safe.”

For example, I used to go to the mall all the time. It wasn’t unsafe at all; I was with my friends and we weren’t doing anything irresponsible. I just wanted to hang out with my friends. And that was not culturally appropriate. I think things like that are perfectly fine, as long as you’re telling an adult.

I’d be wrong if I said you shouldn’t lie about it, or that you have to tell your parents everything. That’s completely unrealistic, and I definitely don’t want to be the person who’s like “Don’t do the things I did.” No, some of those things I did for a reason and people still want to do those things, and that’s fine. I won’t chastise them for it.

There are points throughout your book where you mention declining Facebook invitations or ignoring those that mistreated you in your youth. There’s a quote from Nina Simone that says, “You’ve got to learn to leave the table when love is no longer being served.” Do you agree with that mentality?

Yes, Nina Simone! Yeah, I do. I’ve had friendships, even over the last 10 to 15 years, that started to fizzle out because somebody did something that I hate and that I will not tolerate. In those situations, I don’t try my best to save it. If I know that I’m not fully invested in it, I will let that go. And if I am really invested in that love and that connection, I will fight for it no matter what. Even if it’s an atrocious thing that somebody’s done against me, I will try to find a way to rectify that situation to make sure that we can be friends again.

I surround myself with people that I love greatly. I have nine really close friends in Utah and a handful of friends in this industry who I see regularly and I love very much. I keep my circle pretty tight. I’m a very simple person, where I’ll say, “This is right. This is wrong.” If it’s wrong, I won’t be part of it and I’ll get rid of it.

That’s the case, I think, for a lot of Americans. I love my Americans, but especially in the non-coastal states, they’re often a lot more comfortable being passive aggressive which means that they are hurt more often. And that’s something I’m not willing to tolerate.

How did it feel to have a successful clothing company at 26, especially after facing scrutiny for pursuing your passion earlier in life?

I’ve always felt like I had to prove my worth. To many people, not just family or friends. To people who think I don’t belong in their country or I’m not the right shade of brown to be succeeding. I think that’s the reason why I work so hard—to make sure people see that none of those things affect my success.

It was really hard starting a business young. It was hard starting a business with no money. I had some of the most difficult years of my life. I was working sometimes three jobs, and a business is more than a full-time job in itself. But I was positive that if I continued to sacrifice and work hard, it would pay off. My life plans would come to fruition. That business was my greatest accomplishment at the time. I thought, “That’s it.” That’s where I’d end.

At that point, I was retired. I would have been happy, I would have felt like “OK, yes, I’ve done my people proud.” And then [came the call from Queer Eye] and a whole next level of duty and responsibility that I never expected.

You referred to the original Queer Eye as “a pioneer” in your book. How do you think it paved the way for what your show is doing now?

The original show was great because it had this group of wonderful, wonderful men who were encouraging communities to look inward and think differently. I’m talking mostly about the American community, the white community. Without that show, and without other LGBTQ shows in the early 2000s, I don’t think we would have progressed as much as we have.

We are encouraging conversations globally. That’s the difference. We’re now able to touch people around the world, not just in the U.S.

And our cast is more diverse. Quite honestly, America would not have been ready for me at that time. That was shortly after 9-11. They definitely didn’t want to see a Muslim, Pakistani man on TV, not in a positive light anyway. And so, I think that the conversations that are had now within the Asian community, South Asian community, Middle Eastern community, Black community … I think that they feel more included. We’re shifting the needle in those communities where the original couldn’t.

You’ve talked about feeling like an imposter in your performing arts class, and again when you began to film Queer Eye. How have these feelings of not “fitting in” changed since you gained so much national attention, or are they still there?

Always. I used to hear people say, “I feel like an imposter.” I’m like, “No you don’t. You’re massively famous, shut up. Like, without a doubt, you must know.”

Now I’m in a position where I’m on a show and the show is very successful—and I can’t help but feel it. There’s something in me. I think it’s because I haven’t been in the industry for 10 years or worked for the show for so many years. It just kind of fell into my lap. I know just how insanely lucky I am.

I recently was visiting a few friends at Saturday Night Live, and I remember as I was walking through the hallway feeling like, “What the [expletive] are you doing, Tan?” I was going from one dressing room to another, on my own without security, and for a second I thought, “Get out, you have no right to be here.” I don’t think that will ever go away for me.

Tan makes his most recent on-screen appearance in Netflix’s new show called Next In Fashion, of which Tan is a co-star with designer Alexa Chung.