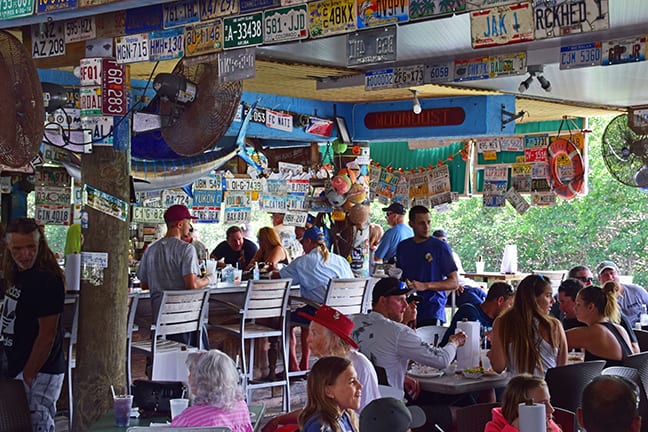 Turn Back the Clock

If you’ve never taken the time to drive south toward Key Largo to visit Alabama Jack’s, you are in for a treat. In just 45 minutes, you can be transported back in time to the Florida of 50 years ago at this legendary open-air restaurant and bar, housed partly on a barge just before the Card Sound Bridge to Monroe County.

Alabama Jack’s is famous for its conch fritters, country music, a regular group of female cloggers and the most eclectic clientele in South Florida. Harleys park out front on weekends and sports cars pull in from nearby Ocean Reef. From the recreational boaters tying up to the many tourists and, oh yeah, a few celebrities, the people-watching is part of the fun.

While better-known patrons have included Jimmy Buffett, Billy Joel and Kathie Lee Gifford, co-manager Mike “Dawg” Arnold says, “Our everyday customers are the most famous. They are the ones we love the most.”

Original owner Jack Strathem was not from Alabama—he was from Georgia—but he picked up the nickname Alabama Jack during one of his early construction jobs (which included a stint as a riveter on the Empire State Building). The rest, as they say, is history.

The Sague family has owned the spot since 1980, when Phyllis Sague quit teaching science and moved to the area with the intention of going into real estate. Alabama Jack’s was the first place she went to sell; instead, she bought it on the spot, called her husband and told him she was out of the real estate business.

Phyllis spent the early years perfecting her now famous, and extremely secret, recipe for conch fritters, no doubt putting her scientific knowledge to good use. Other can’t-miss menu items include the peel-and-eat shrimp, smoked fish and crab cakes.

Today, Phyllis’ son, Mike Sague, runs the day-to-day operations with Dawg, his University of Florida roommate who joined the venture eight years ago when the restaurant got its liquor license and opened a full bar. The enterprise continues to grow, and during the season, serves 500 pounds of conch a week in its fritters, chowder and salad.

Every Saturday and Sunday, guests enjoy the country music of the Card Sound Machine, a five-piece band. Lead singer Selina and brother Jeff grew up watching their parents’ band play and have continued the tradition. When they are not onstage, Selina and her husband, drummer Billy-bob, are conservationists protecting sea turtles for Miami-Dade County.

The Oldie But Goody Cloggers have been holding court at Alabama Jack’s for more than 30 years and are guaranteed to get the crowds up on their feet. If you are old enough to walk, and young enough to still be walking, you can dance at Alabama Jack’s.

“Our crowd is always happy, and we have a little bit of everything from A to Z and out of the box at both ends,” explains Dawg. “It’s a big family here, and that’s what makes everyone want to come back.”

Well, that, and maybe those incredible conch fritters.