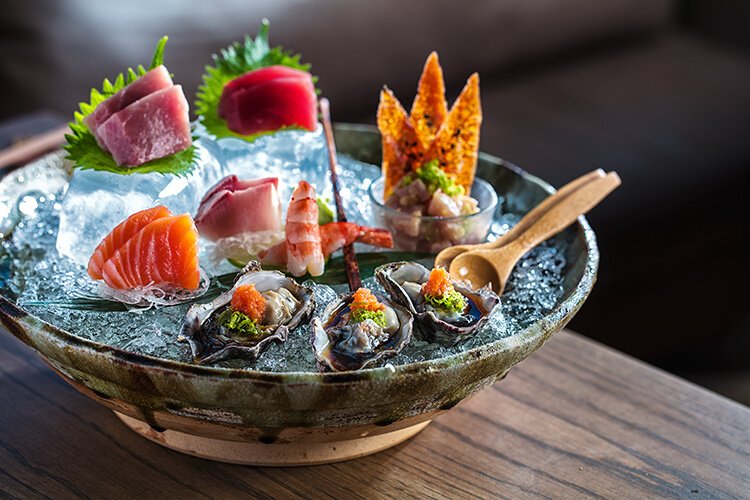 Chef Rainer Becker doesn’t deal in one-offs. There are 13 of his Zuma restaurants around the world—including ones in downtown Miami, Las Vegas and Abu Dhabi. After Zuma took off, Becker opened Roka, which now has four locations in London.

For the time being, Becker’s latest ode to contemporary Japanese cuisine—Etaru in Hallandale Beach (Hyde Resort and Residences, 111 S. Surf Road; etarurestaurant.us)—is flying solo. But not for long. A second Etaru, currently under construction on Las Olas Boulevard, is set to open in the new Icon Las Olas building later this year.

All three concepts get their Zen from the German-born celebrity chef’s time in Japan. His modern robatayaki dishes are presented in a setting meant to feel friendly and informal—but quality and attention to detail of the food are pure fine dining. At the heart of each of his restaurants is the robata grill, a tradition of fireside cooking that comes from northern Japan, where food was slow-cooked over charcoal in a dug-out pit.

Chef Hamish Brown, who began his affiliation with Becker at Roka’s Charlotte Street location in 2006 and is now Roka London Group’s executive chef, created the Etaru menu. “It’s much like a casual dinner party at a friend’s beach house,” Brown says of the restaurant, which opens onto an al fresco terrace only steps away from the ocean.

There are some items that Etaru shares with its British sister restaurant. Roka’s signature lamb chops are on Etaru’s menu, but there’s also more of an emphasis on grilled seafood—charcoal-grilled scallop skewers, snapper, black cod marinated in yuzu miso and grilled tiger prawns. “In robata grilling, the marinades drip through onto the charcoals, and then you get this beautiful aroma that comes through,” Brown says. Vegetables attain a smoky flavor, too; the grilled asparagus, which is permeated by sesame and soy sauces, has a particularly succulent flavor.

Etaru builds upon the informal izakaya (Japanese pub) idea in which dishes are meant to be shared—think small plates such as tapas, sashimi and sushi that can begin a meal or be the main attraction. Raw dishes include black kampachi sashimi with pickled vegetables, and yuzu-truffle dressing; softshell crab sushi rolls with cucumber, kimchi and chili mayonnaise; and a sashimi platter (opposite page) that looks as good as it tastes.

Three types of fresh fish are on the sashimi platter—salmon, tuna and hamachi. “Each sashimi is going to bring something different to the palate,” Brown says.

There are two tartares, tuna and yellowtail. A raw quail egg, served in a half-shell with the yolk intact, is meant to be mixed into yellowtail tartare, along with Ostera caviar. “You get the rich creaminess of the quail egg,” Brown says, “and the caviar to add saltiness.”

The tartares are meant to be scooped with rice crackers, which are made in-house daily. How? A puree is created from egg whites and rice, then spread thinly over parchment paper and fried.

Fresh oysters get the Etaru twist, where an inky-black vinegar, made from rice and aged for a woody flavor, is lightly poured over the top. “The vinegar mixes with the briny seawater [inside the shell] and you get this tsunami of flavor,” Brown says.

The sashimi platter is anchored by a small, square block of ice and served on a mountain of crushed ice. “It’s all about keeping the temperature of the fish just right and highlighting the simplicity of all that nature has to offer,” Brown notes.